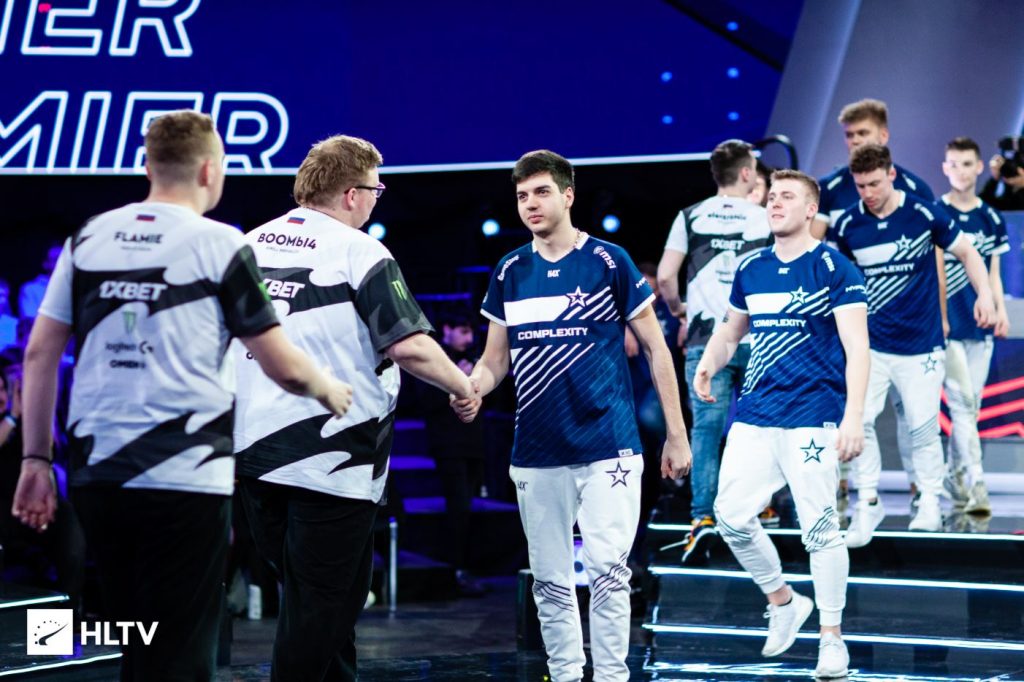 Complexity have pulled off a massive upset at the BLAST Premier Spring Final, taking down Na’Vi in three maps. The teams came in ranked 20th and 6th respectively, the biggest difference in standing of any matchup so far.

The map veto started with the removal of Overpass and Vertigo. Complexity opted into a Nuke pick, while Na’Vi chose Dust2. Mirage was then chosen as the tiebreaker.

With Nuke being Complexity’s pick, they were forced to start on T side. It wasn’t a hot start, as Na’Vi took the pistol round then easily cleaned up on anti-eco. The first rifle rounds didn’t go Complexity’s way either. Na’Vi gathered a 6-0 lead before the T’s finally got on the board thanks to a 1v2 by Benjamin “blameF” Bremer.

Just when Complexity were starting to get into the game, Aleksandr “s1mple” Kostyliev answered back with a clutch of his own retaking the A bomb site.

The half ended 10-5 for Na’Vi. While 5 T rounds isn’t favorable, it certainly isn’t unwinnable. Complexity just needed to show why they picked this map. Instead, Na’Vi completely took over. Another pistol round win brought their score to 13. After dismantling all of Complexity’s attempts at map control, Na’Vi put a cork in map one 16-5.

Down a map, Complexity now had to contend with Na’Vi on their most played map in the past three months. Many were ready to pronounce them dead, but Complexity would not oblige. They won the first three rounds before losing the fourth to the Na’Vi full buy. Complexity then decided to rush the B site and succeeded in flipping the momentum. At one point, they even held an 8-1 lead over Na’Vi.

Still, the CIS squad was able to stabilize for their final six defensive rounds, cutting the deficit to 7-8. Having slipped that far, Complexity needed to make a stand in the second half. After trading the initial rounds back and forth, Complexity pulled together a low economy sweep of Na’Vi’s A site hit thanks to Valentin “poison” Vasilev’s Scout play.

Poizon continued to dominate the long-ranged map. Once his AWP came out, Complexity went flawless on the CT side. Poizon ended Dust2 23-9 with a 1.57 rating, helping his team even up the series with a 16-8 result.

Finally, the teams would meet on Mirage to decide a winner. Despite having played 14 Mirage games in the past month with a 64 percent win rate, the analysts and odds were still against Complexity. A clean B site retake on the pistol round by Complexity’s CT side got them off to a quick start. Na’Vi chose to buy in the third round but were shut down on the Mid to A push.

Na’Vi’s next gun round also featured an unsuccessful A site attack, this time shut down by Owen “oBo” Schlatter in a forward position.

Tired of slow A side plays, Na’Vi got their first two rounds of the game via a B rush followed by heavy Mid and Window control. With Complexity out of money and on a FAMAS buy, William “RUSH” Wierzba turned Na’Vi’s B site burst on its head.

Now that Complexity had stopped that play, Na’Vi just looked lost. They were unable to find consistency both as individuals and as a team. The Complexity lead ballooned to 12-3 at the half, putting them firmly in the drivers’ seat.

Throughout this game, Kristian “k0nfig” Wienecke was quietly racking up the kills while staying alive. When Complexity swapped to the T side, this match became the k0nfig show. He went 11-0 in the second half, leading the way to a clean 16-3 finish. K0nfig ended the map with a 27-3 KDA; his only deaths coming in the three rounds Complexity lost. Combined with his 120.8 ADR, k0nfig punched in a legendary 2.35 HLTV rating.

This slip from Na’Vi does not bode well for their run at BLAST Premier Spring Finals. Not only did they have the easiest matchup in Winners’ Semifinals, they must now run through a stacked lower bracket. Their next match will be against the current world number one in G2 Esports. Na’Vi recently fell from the top two ranks for the first time since their IEM Katowice win in March. If they can’t stop the skid, the CIS giants could fall even further.

As for Complexity, this was a big statement win. They’ve been playing against the best that CS:GO has to offer for over half a year now. For every amazing result they managed, they would have a terrible one not soon after. Everyone knows what this roster is capable of at their peak, the challenge is being able to reach it consistently. Complexity could have things all figured out soon enough.