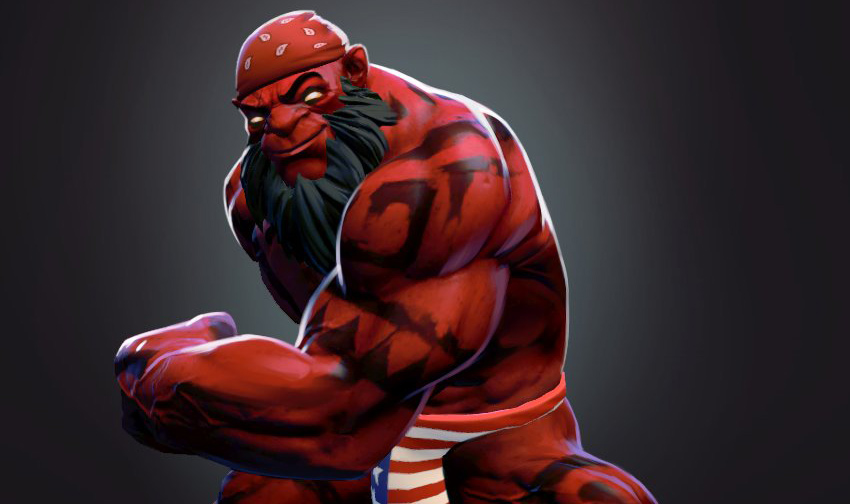 There are plenty of cosmetic changes for Midas Mode but none as as sexy as Axe.

It is the rare esports event that develops an entire custom game version of the original. Rarer still is the event that sells parts of the map to the community. BETWAY Midas Mode 2.0 does both.

The community fundraising for the event has given us some delightful new aesthetics ranging from hero makeovers to a new courier to an item cosmetic. Moonduck Studios has had a whole team of artists working on the cosmetics, and it really shows in the quality of the new graphics

Let’s review them all ahead of the first day of the tournament!

The first Dota 2 hero to get a makeover was Witch Doctor.

WE CAN'T WAIT TO SEE THIS BADBOI IN ACTION at BETWAY MIDAS MODE 2.

Capri Sun and Gun Witch Doctor has been a meme for multiple years, dating back to when Alpine Ursa appeared in the workshop. Witch Doctor is now armed with the handgun in place of his staff and a refreshing fruit juice pouch to keep him hydrated. The hero’s upgrades were a great proof-of-concept for people who were on the fence about purchasing a hero.

Not to be outdone, @raeyei purchased Axe and transformed him into a thong-wearing patriot!

AXE has been purchased for @betwaydota2 MIDAS MODE 2 from the very generous @raeyei ! But what has axe trasformed into? Well, take a look! (Video by @tsunami643 ) sadim still sellin on https://t.co/cVdwpapATu and https://t.co/ZDv4AO9IQz cant wait to stare at this thong all week pic.twitter.com/ToEXTs24H3

Axe didn’t see a lot of play time at The International 2019, which may make him an ideal hero for Midas Mode as his pick price point is pretty low. It would be a shame for us not to be blessed/cursed by dat ass.

Ancient Apparition’s purchaser chose to take a different route. The new look leans into AA’s frosty theme, giving him the soft-serve treatment. With a cherry on top, he may be more like dessert than ice-cold support.

he also comes with a little babby for his auto attack! again, special thanks to our art team @bladeofavilliva @hawtkoffee @wudgiefudgie and @tsunami643 for making him real! pic.twitter.com/E9yKx2yWMi

When ESL posted an article entitled, “Why ‘Midas Mode 2’ is bad for esports,” it may have seemed concerning. At least, until we read the article and realized even ESL was ready to get in on the act, purchasing Kunkka. As their in-game representative, Kunkka’s decked out in ESL garb, with the trophy on his back and the combined power of a thunder stick and a Kappa poster to unleash on the enemy.

The blinding stage light is an amazing touch, and speaks to the real heart of this tournament. There are so many well-conceived nods to the community in all the little Easter eggs that makes Midas Mode truly an event for fans.

Of all the hero revamps, the one that may disguise the hero the best is the full-body chicken suit Skywrath Mage will wear. The Canadian Chicken has a Canadian flag, denoting his status as a Canuck. This is the Chicken we deserve.

BEHOLD one of the…most…unique hero purchases of @betwaydota2 MIDAS MODE 2: THE CANADIAN CHICKEN. GRACIOUSLY purchased by @DotaHGV and the Ability Draft community! May Canada and Ability draft live on forever. The project is almost over, get your own! https://t.co/KwZ6E9vJWx pic.twitter.com/xKdxSpctK1

The wisp made a splash at The International 2019 in the hands of Anathan “ana” Pham. His mastery of how to carry with Io helped OG go the distance and lift the Aegis. How appropriate then that OG has purchased the hero to slap their logo on? They’ve replaced Io’s balls with ana’s face. Of all the possible weapons to use, this one may not have been the most obvious but it’s glorious nonetheless.

The most recent reveal came to us because of the generosity of Johan “N0tail” Sundstein.

Out if nowhere, @OG_BDN0tail decided not only to purchase one of the heros for @betwaydota2 Midas Mode 2, but also thew a big ol donation our way as well to help with the tourney costs! PRESENTING: GREEN SWAMP MAN who has NO AFFILIATION WITH OTHER INTELECTUAL PROPERTIES! enjoy!! pic.twitter.com/0jGmZKBrvk

Two heads are better than one. And we think this version of Ogre Magi will look far more comfortable on the Dota 2 map than even the original!

During day one of the event, there was an announcement for Wraith King. Shannon “SUNSfan” Scotten is a fan of the original DotA King that Wraith King was modeled after: Skeleton King.

BOW BEFORE YOUR KING!!!! We have revived the one true King, JUST for Betway Midas Mode 2.

With this hero cosmetic, Wraith King goes right back to his roots!

Last, but not least, is the new Brewmaster cosmetic. Team Secret got in on the act, buying the popular keg-carrying hero for themselves. And, of course, they recognized the incredibly advertising potential. Behold the new Brewmaster:

Team Secret’s new beer, AFK, is now right there in the game. Refreshing! Just don’t treat your own beer the way Brewmaster does or you’ll end up wearing!

Let us know on Twitter which of the new hero cosmetics is your favorite!

Other Awesome Bits and Bobs

The Kennedy Space Center was not going to let the perfect opportunity to get into the actual game of Dota 2 slide. When Jake “SirActionSlacks” Kanner revealed the Mars Opportunity Rover, we were left wondering why this courier didn’t exist sooner.

The time has come for an old friend to return. With thanks to @ExploreSpaceKSC please welcome the MARS OPPORTUNITY ROVER, the OFFICIAL COURIER FOR BOTH TEAMS DURING MIDAS MODE 2! HIS BATTERY IS FULL, AND ITS GETTING BRIGHT pic.twitter.com/Uy8IjlS2pA

Adorable. This is the last of the traditional (and we use that term loosely) cosmetics. Honestly, there’s enough here that Valve should make a Midas Mode 2.0-themed treasure using them all (and send the profits to Moonduck Studios—an advance on Midas Mode 3.0!).

Moonduck divided the items into tiers and put the naming rights up for purchase.

Of the Tier A items, only the Hand of Midas was sold. But it was well worth it because the Hand is, shall we say, popular.

Behold, the Buff Your Finances Hand of Midas in action!

You can see it live starting on Tuesday, September 24th. pic.twitter.com/x9HJmhiFaU

That animation is fantastic and makes it beautifully clear when a hero is using the item.

Also sold is the Radiant Ancient Camp, but we haven’t seen those yet either.

Well done to everyone who chipped in to make their dreams into memes and support the event. Kudos to Moonduck for taking on this massive undertaking. Good luck to the casters who are supposed to use the new item names. And a huge thank you to all of the hardworking artists who made these ideas come to life: @hawtkoffee, @BladeofAvilliva, @WudgieFudgie, @ToFoQc and @tsunami643, who made the videos.

There may also be some other surprises in store, so keep your eyes peeled once the games kick off at 10:00 a.m. MT on Twitch.