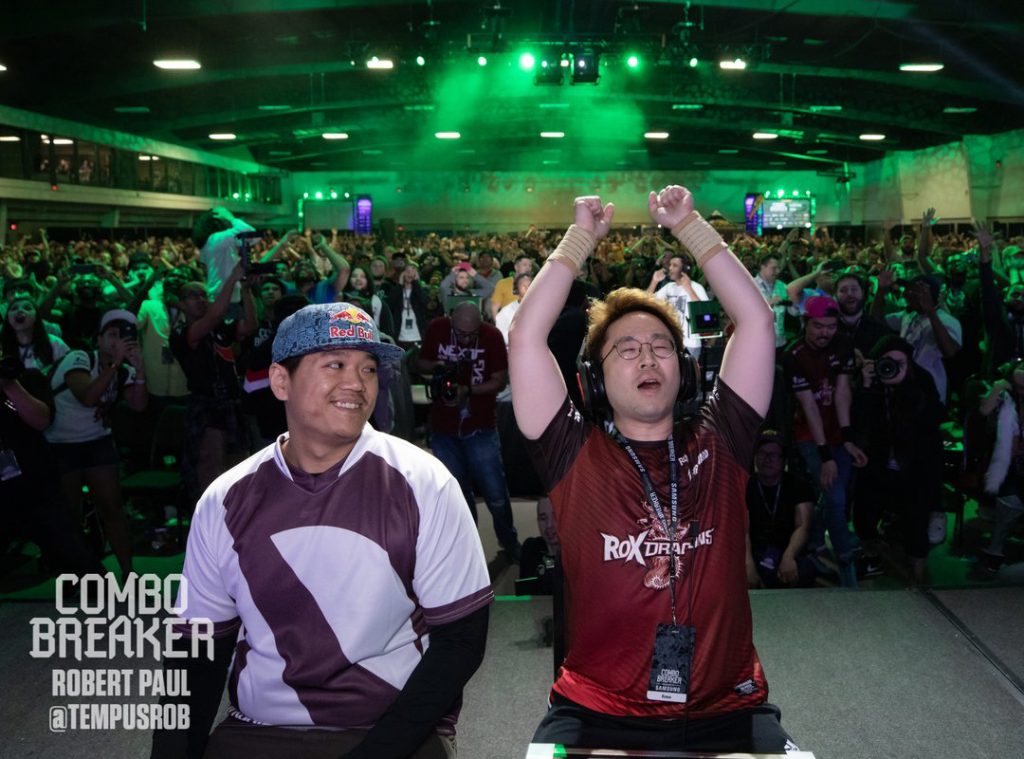 The Tekken 7 Grand Finals between Knee and Anakin might have been the highlight of Combo Breaker 2019. (Photo courtesy of Robert Paul)

Combo Breaker 2019 is officially in the books and, as expected, the event was filled with the highest level of competition the fighting game community had to offer. But, with over 20 different tournaments across the entire weekend, there is no possible way that one person could keep track of everything. That is why this writer is here: to give you all the highlights and results that you need to know from Combo Breaker 2019.

It didn’t come easy for Bae “Knee” Jae Min but the Tekken legend extended his legacy at Combo Breaker 2019. Knee suffered an unexpected early loss, which sent him to the loser’s side of the bracket. He clawed his way through some epic battles with Jeong “Rangchu” Heyeon-ho in the loser’s finals to set up a date in the Grand Finals.

Knee had to win back-to-back sets against Jack-7 main Hoa “Anakin” Luu. Anakin entered Combo Breaker playing the best Tekken of his life, winning the past two events he entered and finishing top two in four of his previous five. It looked like Anakin would roll to a career-defining victory after dominating Game 1 and 2 in the Grand Finals but swapped off Devil Jin for Paul, sweeping the next three games to send it to a Grand Finals Reset.

Then the roller coaster continued, with Knee winning two straight games before Anakin came charging back to send it to a tournament deciding fifth game. In the final game of the tournament, the pendulum swung one last time with Knee taking home the victory.

Honestly, words can’t do this match justice. Just, do yourself a favor and watch it.

It’s not like Brad “Scar” Vaughn is an unknown, in fact, he was one of the better MKX competitors, but he wasn’t exactly entering Combo Breaker as the favorite. However, Scar not only dominated, but did so against the best players on the planet. Victories over Matthew “Biohazard” Commandeur, Tasman “Waz” Stoker, Tommy “Tweedy” Tweedy and Denom “A F0xy Grampa” led Scar to the Grand Finals.

In the Grand Finals, Scar faced his toughest test, Dominique “SonicFox” McLean. SonicFox was undoubtedly the favorite in the tournament but an unexpected loss to Tweedy meant he had to battle through the Loser’s Bracket to make it to the Grand Finals. That meant Scar needed to take just one set off SonicFox. It was a hard-fought Grand Finals but Scar was able to use Sonya Blade’s zoning ability and punishing wake-ups to keep SonicFox’s Jacqui Briggs at bay.

Scar was masterful throughout the tournament, mixing up Sonya’s amazing zoning abilities and the brutal strength of her Ring Master variation.

This also continues SonicFox’s inability to win a Mortal Kombat game at Combo Breaker. There is just some weird curse for him with this game at the huge FGC event, though he did walk away with a win in Skullgirls: 2nd Encore.

Victor “Punk” Woodley has been the best Street Fighter V player during the 2019 Capcom Pro Tour and he solidified that status by winning Combo Breaker. The Karin main steamrolled his way to the Grand Finals, dropping just one set in nine games. Punk would face some adversity in the Grand Finals against veteran Benjamin “Problem X” Simon.

Punk had already beaten Problem X before the British competitor won his way back into the Grand Finals through the loser’s bracket. And though many expected Punk to easily dispatch his opponent again, Problem X changed up his strategy by using Abigail and swept the Capcom Pro Tour leader 3-0, setting up a Grand Finals Reset.

However, Punk was able to adjust to the character swap and swept the Grand Finals Rest 3-0.