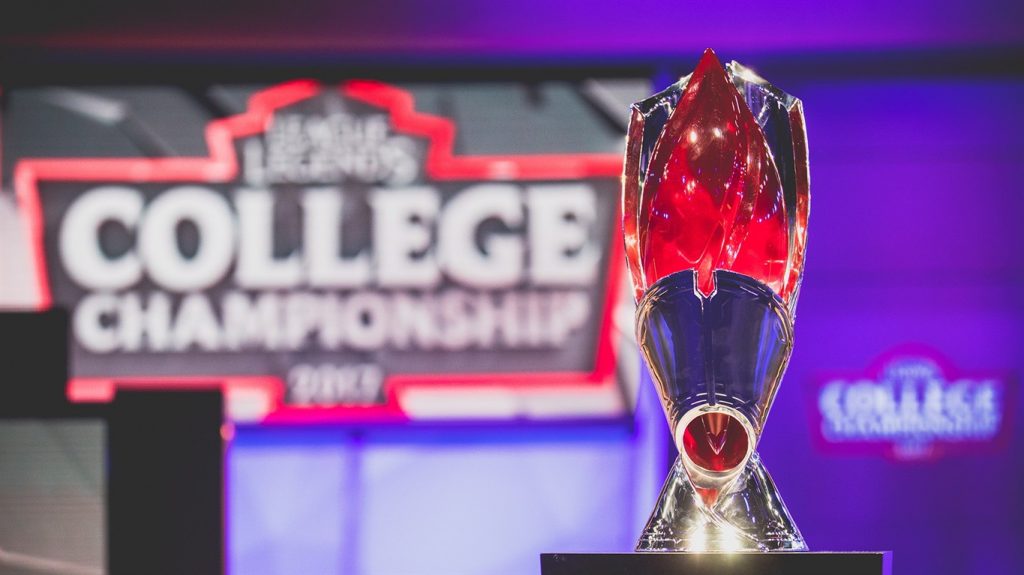 Many of the regions are ready to start the playoffs in the collegiate LoL scene. But before that, here are the power rankings after a crazy week of play.

The regular season for the Big Ten will continue on for two more weeks, but it’s onto the playoffs for the rest of the field. There we’ll get more answers about teams like Miami and Stony Brook, who finished the regular season undefeated but didn’t face off against the top seeds in their conference.

We have to admit, we’ve been sleeping on UT Austin. The South is generally one of the weaker regions for collegiate LoL, and there has been a lot of turnover in the conference again this year. Still, UT Austin staked their claim as the best in the South with a 2-1 win over George Mason University in Week 6.

Both of UT Austin’s wins came in close games against George Mason. George Mason were able to take three of four drakes in Game 2, trying to finish off the series quickly after a convincing Game 1 win. But UT Austin fought back, stymying the hard engage from Malphite and Leona with a well-played Ezreal from xRequiem. UT Austin even finished Game 3 of the series behind in kills 17 to 18, but all that matters was the takedown of the Nexus. With the win, UT Austin head to the playoffs as the favorite in the South.

We’ve heard the hype on Harrisburg all season long, but with their best win having been against the East’s 10th seeded University of Toronto, it was hard to justify moving them to the top five on hype alone. That hype now has some substance after their 2-1 win over the top-seeded University of Waterloo.

The first game of the series was the most closely contested, taking Harrisburg 39 minutes to close out. Waterloo controlled the second game, leaning on Platoon’s Ezreal to get the job done. But with Zing back on Ezreal in Game 3, Harrisburg closed out the series in dominant fashion, conceding only one tower to Waterloo. LikeAMaws was subbed in at mid lane for Game 3 and responded with a 2/0/5 performance on Orianna for Harrisburg.

If there were any thoughts that a challenger could emerge to knock off UCI in the West, those were put to bed in their 2-0 win over Arizona State in Week 6. UCI were methodical in their Game 1 win, picking up 15 kills to ASU’s three and allowing ASU only one turret and one drake in terms of objectives. Captain Nuke had a big performance on Jax, finishing 6/0/7 while dealing 33% of his team’s damage.

Arizona State scrapped together some more kills in Game 2, but the result was much the same. They only managed to pick up two turrets in this one despite claiming three drakes for themselves. Descraton took his turn to carry for UCI, finishing the game 9/2/10 on Orianna. He dealt 32.6k damage to ASU, good for a ridiculous 41% of his team’s damage. They don’t have much left to prove in the West Conference and we should be seeing them in the 2019 College Championship.

Losing to Columbia College is no embarrassment, but it has to be tough to swallow given the rivalry that has developed between the two over the past couple of year. It may feel weird to see them ranked up this high after a 0-2 loss, but remember that one of CC and Maryville had to lose and they were our 1st and 2nd ranked teams heading into Week 6. We can’t just forget that they won a pair of 2-0 series wins over UCI the previous weekend.

Our new top spot goes over to Columbia College after their 2-0 win over Maryville. They are no strangers to the highest level of collegiate League of Legends, as they finished 2nd in the 2018 College Championship to UC Irvine. Armed with the additions of NintendudeX and rovex, they look like the new favorites in 2019.

Against the same Maryville lineup that 4-0’ed UCI last week, Columbia College pulled off a sweep of their own. Game 1 was closely contested, but Columbia College won it by shutting down Saskio’s Lucian. The dive threat of MistyStumpey’s Kennen, NintendudeX’s Jarvan IV, and rovex’s Yasuo kept Saksio from making an impact in the game. Although he died only once, Saskio was only able to muster 4.8k damage in the 34-minute game.

Game 2 was a stomp for Columbia College. They held Maryville to 0 objective takes for the game and left no doubt in this one. Both teams eschewed traditional ADCs, with EvanRL playing Cassiopeia and Saskio playing Kled. Rovex showed off his ability to play Sylas at a high level, finishing 9/1/5. BukZacH has looked much more comfortable back in bot lane this season after playing jungle for CC last year. He finished game 2 deathless on Braum at 0/0/14.