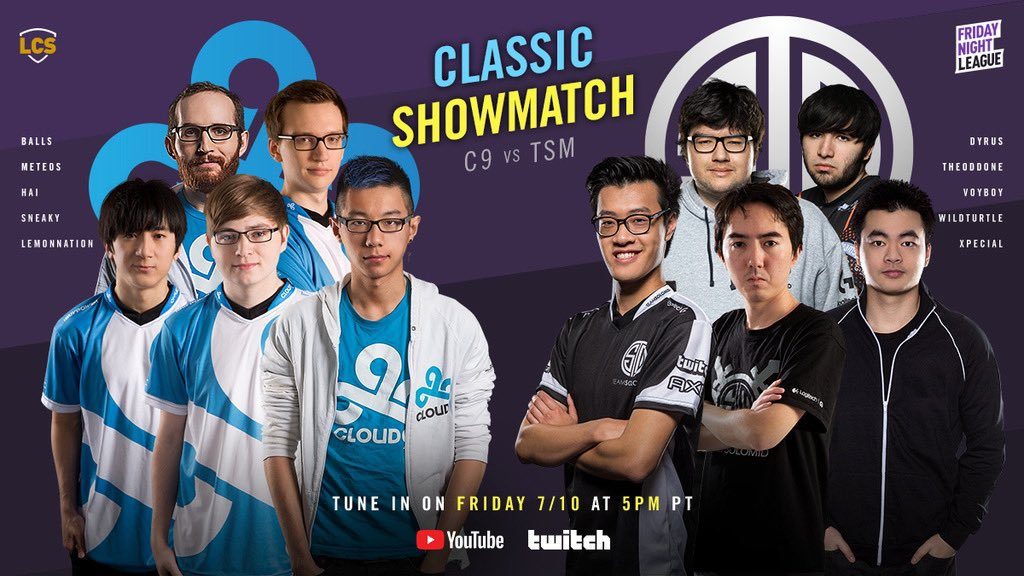 C9 and TSM turn back the clock to 2013 for a Friday night showmatch. (Photo courtesy Riot Games - LCS)

Riot Games have announced a special classic showmatch between old Cloud9 and TSM players ahead of this weekend’s LCS match. The rosters include many names from the golden eras of the two teams.

The rosters for @Cloud9 vs. @TSM Classic Showmatch on Friday, July 10 at 5PM PT are:

The one name that appears out of place is TSM’s Voyboy, who is listed as a special guest. TSM have only had two mid laners in their history: TSM founder and CEO Andy “Reginald” Dinh, and current mid laner Søren “Bjergsen” Bjerg. With Reginald unable or unwilling to play, Voyboy will step in as a former pro player who competed during that era and still plays the game at a high level.

This is the original Cloud9 lineup that broke into the LCS in 2013 Summer and took the league by storm. C9 went 25-3 in their debut regular season, then went on to sweep TSM 3-0 in the playoffs to win their first LCS title. They then won a second consecutive title in 2014 Spring, before falling to TSM in 2014 Summer. The roster changed in 2015 Summer as Nicolaj “Jensen” Jensen, then known as Incarnati0n, joined the starting lineup.

This TSM roster, minus Voyboy, first came together in 2013 Spring. After a 21-7 regular season, TSM beat Good Game University, later known as Team Coast, in the finals to win the LCS title. After losing to C9 in the 2013 Summer Finals, Reginald stepped down from the team in favor of Bjergsen. TheOddOne and Xpecial lasted only one more split before they moved on.

Cloud9’s team looks to have an advantage based on the current skill level of the players. Both Meteos and WildTurtle are contracted to LCS teams and have played this split, but Sneaky is only one split removed from being a pro. Balls, Hai, and LemonNation all played professionally as recently as 2017 Summer with FlyQuest, while TheOddOne has not played since he left TSM in 2014. Voyboy has also not played since 2014, unless you count the split he and Dyrus played in the challenger series with Delta Fox in 2017 Summer.