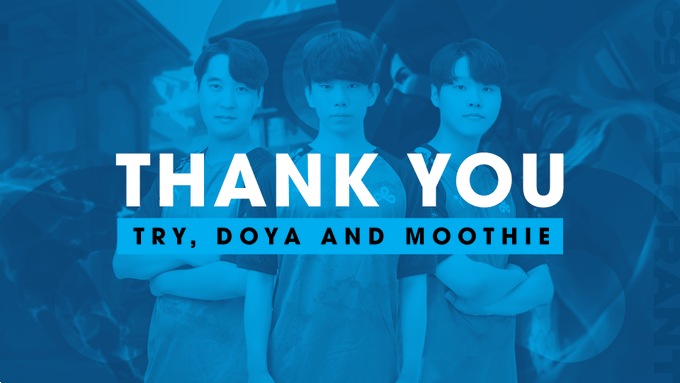 After only two months playing with the team, Try, Doya, and Moothie have departed. (Photo courtesy Cloud9)

Cloud9 Korea has parted ways with Tae-wook “try” Kang, Do-gyeong “DoYa” Kim, and Seung-woo “Moothie” Yoo on Tuesday. The three players were only with the team for two months before being released. With their departure, Cloud9 Korea’s active roster now only consists of former Overwatch League players Jun-ki “Bazzi” Park and Sang-beom “Munchkin” Byeon.

Although their time here was short, @cloud9_try, @DoYa_vlrt, and @Moothie_e have contributed a lot to the progress of the #C9VALKR team.

Today we are parting ways and would like to thank them for everything they have done in their time here. We wish you the best of luck 💙 pic.twitter.com/kqxGAhEx04

During their three months with the team, Try, Doya, and Moothie competed in four tournaments. The team competed at the Huya Summer Festival in September, where they were eliminated in the semifinals by O2 Gaming. They followed that performance with an early double octafinal exit from the Clan Battle Act 2 #1, then a semifinal finish at the Clan Battle Act 2 #2. They finally competed in their first A-Tier a few days ago, the A.W Extreme Masters Asia Invitational. They performed decently at the event but were ultimately eliminated in semifinals by Absolute JUPITER.

Try and DoYa both came from the competitive Player Unknown Battlegrounds scene, while Moothie competed in Apex Legends before switching to VALORANT. Unfortunately, it seems that these battle royale player’s skills didn’t translate into VALORANT quite as well as Bazzi and Byeon’s skills from Overwatch. Like many other early VALORANT teams, Cloud9 is calling and audible on their inaugural lineup and looking to rebuild their roster before professional VALORANT competition kicks off in earnest over the next couple of years.

The player cuts came at a bit of an odd time for the team. Cloud9 Korea made the announcement while in the middle of the B-tier Clan Battle Act 2 #3 tournament. In fact, they were scheduled to compete in a semifinal match against Quantum Strikers on Wednesday morning. Presumably the team will be forced to drop out of that tournament, though it is also possible they plan to play with stand-in’s instead.