Cloud9 have rounded out their Dota 2 roster ahead of the Regional Leagues next season. (Photo courtesy Cloud9)

It was a surprising move from Cloud9 when they announced a new Dota 2 roster back in January. The North American organization would be signing an internationally diverse group of players to compete in the SEA region. Though the roster featured long-time veterans Rasmus “MISERY” Filipsen and Johan “pieliedie” Åström, the team failed to climb out of the Open Qualifiers for the LA Major. Roster changes were expected. The organization had hinted it would be moving to the North American region in the next cycle of Dota Pro Circuit events and seemed to be missing some residents of the region to make the move feasible.

A new team of old faces

Noticeably missing from the initial roster was one Jacky “EternaLEnVy” Mao who has been the centerpoint of nearly every iteration of Cloud9 throughout the years. Cloud9 rectified this omission on Tuesday by announcing that EternaL EnVy would be joining the team along with Jinjun “Sneyking” Wu and Marcus “Ace” Hoelgaard.

The signing of EnVy and Sneyking has been rumored since their departure from Fighting Pandas and reunites EnVy with former Cloud9 teammates pieliedie and MISERY. The addition of Ace to the roster was more of a surprise, especially since he will be playing mid lane for the team. It is a positional switch that could end up working quite well however. The Danish carry player most notably played for Ninjas in Pyjamas last season, Team Secret the year before that and boasts a unique hero pool that translates well into the mid lane. Ace also formerly played on Cloud9 in 2017 when the organization signed the all Danish roster formerly known as Danish Bears and The Imperial.

The new roster from position 1-5:

For an organization the size of Cloud9, losing in Open Qualifiers is hardly acceptable so it’s not too surprising to see the shuffling of players. The new roster is full of TI veterans and brings together a strong dose of experience and talent. On paper, it appears to be a team with a much higher ceiling and chance to live up to the standards expected by Cloud9. 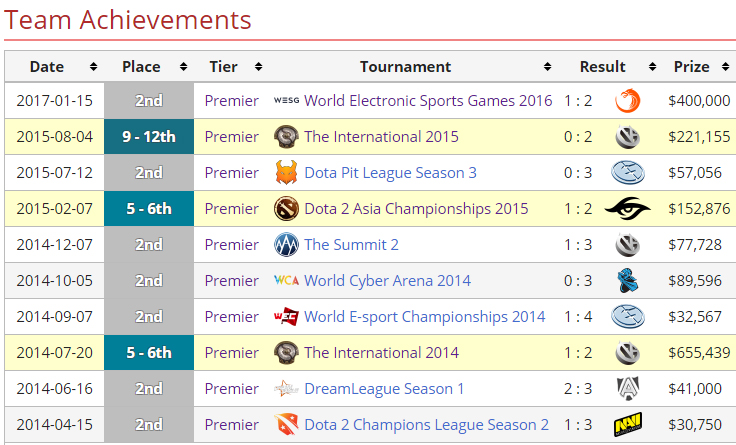 Cloud9 has swerved in and out of Dota since 2014 with varying results.(Photo courtesy Liquipedia)

The Future of Cloud9 Dota

Cloud9 CEO, Jack Etienne, has been vocal in the past about the difficulty of maintaining a Dota team in the game’s turbulent ecosystem. As he told Proving Grounds in 2018, “If I see the opportunity to go back to that game [Dota2], I am. I really enjoy it. I love the community, and they love Cloud9. It’s really just an opportunity thing… I don’t like to sign players unless it’s for three years minimum, which allows me to build a culture with that team.”

With the potential stability offered by next season’s league system, this looks to be the opportunity that Cloud9 has been waiting for. It is always hard to take a long term vantage point on a team filled with notoriously volatile players. The good news for Cloud9 is that there is history between teammates to build on and a strong familiarity with the organization. The better news is that they will likely be joining a North American region that seems wide open when it comes to qualifier slots.