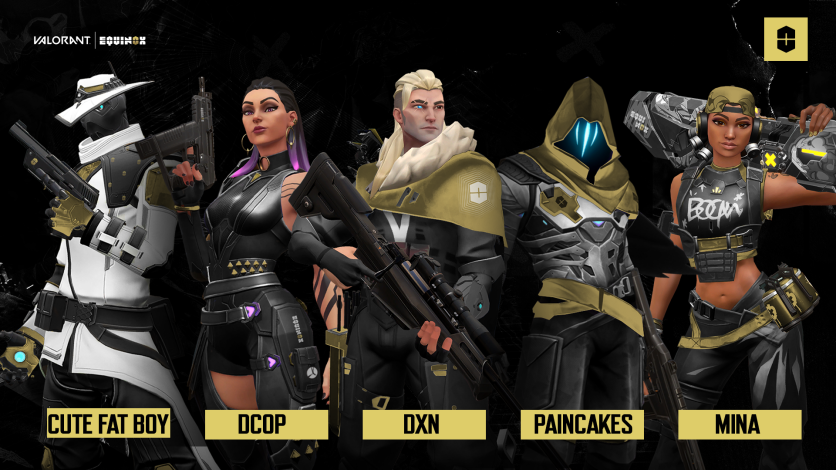 North America’s most promising unsigned VALORANT roster has finally found a home. China Nguyen have been one of the region’s top squads in the months following the game’s release, despite competing without the backing of a large organization. On Wednesday, the team, composed of David “DXN” Nguyen, Danny “cute fat boy” Nguyen, Carlo “Dcop” Delsol, Jake “Paincakes” Hass and Kevin “mina” Nguyen, announced their signing with newly established org Equinox Esports.

In July, psalm left the team, along with the other two founding members, Nicholas “Gh0st” Graham and Raymond “Rarkar” Xu. Despite a rebuild that brought in former Overwatch and Apex Legends pro, Dcop, along with Paincakes and mina, China Nguyen has continued their string of success in smaller tournaments.

In the two months since their roster was finalized, China Nguyen have amassed a 19-5 match record while claiming wins in the Nerd Street Gamers September Monthly and the 30Bomb Invitational. Chances to face off against the upper crust have been slim in the time since Riot’s Ignition Series events came to a close, but the team has consistently racked up wins against tier-2 competition.

The signing of China Nguyen represents the first foray into competitive gaming for Oklahoma City-based organization Equinox Esports. The org also intends to field competitors in Super Smash Bros. and League of Legends.

“Our goal was finding a team that could capitalize on pre-existing synergy and had a good, healthy team culture, and China Nguyen displayed that,” said Connor Knudsen, director of competition at Equinox. “We have immense respect for all of the players and are excited to let them continue building that culture together under our organization while we give them the resources they need to take their game to the next level. We don’t just want to win in the short term. We want to build something truly amazing at Equinox Esports.”

Next on the horizon for the team will be the upcoming Renegades Invitational, a final tune up before the start of North America’s First Strike Tournament, Riot’s first officially produced event. First Strike will feature a rigorous qualification process and will crown Regional Champions in eight regions around the world.

Valorant
Share
Bradley Long
Bradley is a freelance writer who started his esports journey with Overwatch’s launch in 2016. Since then, he’s thrown himself headfirst into the competitive scene at all levels. When he’s not writing about the Overwatch League, he’s probably casting Tier 3 tournaments or playing with his cats.
Follow me