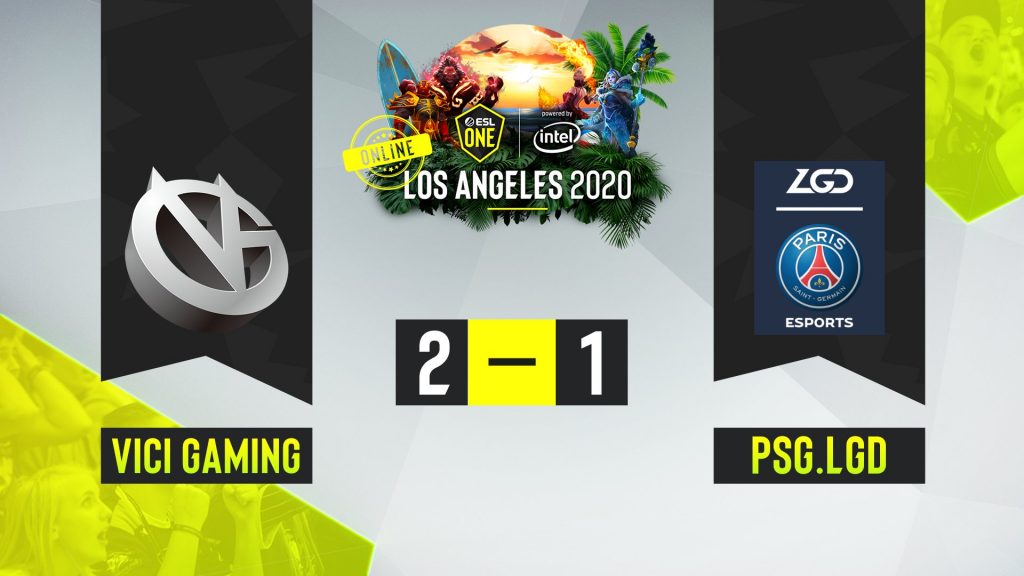 The Chinese teams at ESL One Los Angeles put on a real show on the first day. (Photo courtesy ESL)

China kicked off the first day of the ESL One Los Angeles online tournament in style, with exciting matches and tense moments seen across the board. There may not be a crowd cheering their lungs out this time around, but the teams from the far East have stepped up to the plate to provide great games for viewers across the globe nonetheless.

Three separate best-of-three series marked the start of the five-day competition, with fan favorites like PSG.LGD Gaming, Royal Never Give Up, and Newbee fighting for position in the standings.

Legendary Chinese carry Liu “Sylar” Jiajun and the rest of EHOME went the distance against The International 7 finalists Newbee, taking them down in three games to begin the day. Their first game was a somewhat back-and-forth affair, with both teams trading kills through nearly 32 minutes of play. But it was EHOME’s better laning that allowed them to get ahead, along with a great performance from Sylar on Lone Druid.

That was HUGE for @EHOMECN ! #ESLOne

Newbee struck back in the second game with a vengeance, securing victory with a Troll Warlord pick that sealed the deal in 27 minutes. Newbee started to run away with the lead in the mid game, having taken excellent engagements thanks to Yin “Aq” Rui’s dynamic Storm Spirit and Wen “Wizard” Lipeng being the backbone as Centaur Warrunner.

Alas, the comeback wasn’t meant to be for Newbee. They surrendered the deadlock to EHOME after nearly 40 minutes of nonstop action in the third game. A monstrous performance by Cheng “NothingToSay” Jin Xiang saw him pick up 11 out of the 30 kills scored by his team, along with a rampage in an engagement next to the Roshan pit. The slugfest came to a close after a decisive teamfight by EHOME in the waning minutes, allowing them to push straight down from bottom lane and into the ancient.

EHOME now has a solid 2-1 record in maps, putting them in second place in the standings. They’ll want to keep up the momentum and poise going, for they will face LGD in tomorrow’s matches.

Royal Never Give Up blitzed through the first day of ESL One competition, closing out their series against Invictus Gaming two games to none. The first game was neck and neck through the early and mid game stages, with neither team holding a significant advantage for very long.

The contest turned on its head, however, when RNG scored a huge four for nothing teamfight win at 32 minutes. Fueled by Du “Monet” Peng’s incredible DPS on Faceless Void, RNG wiped the floor with iG’s heroes and marched straight down the middle lane for the win.

The second game was even more gripping than the first, and lasted much longer at 47 minutes. Both sides ended with almost as many kills as the other, but it was RNG’s solid, consistent play that won them the match. Gao “Setsu” Zhenxiong carried the load for his team, raking in almost 750 gold per minute and dealing nearly 55,000 points of damage to iG’s heroes.

Monet also pulled his weight and then some on Riki, scoring nine kills and being a disruptive force throughout the game. Should they continue this kind of performance over the next few days, RNG should be a lock for the playoffs. iG didn’t look all that shaky either—and could still develop into a true threat in this tournament should they find their footing.

They’re not second in the Dota Pro Circuit standings for nothing. ViCi Gaming went on to put LGD and the rest of the league on notice, taking their rivals down in three games in pretty convincing fashion.

Zhang “Eurus” Chengjun imposed his will immediately in the first game, going a perfect 10-0 with his Faceless Void. His item timings were a sight to behold; Mask of Madness at 11 minutes, a Black King Bar at 22, and a full Mjollnir at 25 minutes tells you all you need to know about his performance.

LGD showed some fight in the second game, bringing Yang “Chalice” Shenyi’s brand of Nature’s Prophet play to the table. The TI8 finalist farmed up a storm, and terrorized all of VG with his presence. Not even the stellar Ember Spirit performance by Eurus saved VG from Chalice—and though it was touch and go for them at some points LGD held fast to take the win.

Unfortunately for them, it was all for naught. Eurus proceeded to slaughter LGD in the third and final game, going 17-0 on an extremely farmed Morphling. There was very little LGD could do to stop him from blowing them up left and right with the Ethereal Blade/Adaptive Strike combo—even with someone like Xu “fy” Linsen pulling off his signature Rubick plays.

There’s no doubt about it: ViCi Gaming are still the strongest team in China, and what better way to prove it by taking down one of their greatest rivals at ESL One. We can easily see them winning the Chinese division of this tournament, though they will have to keep their cool and not get too complacent. As for LGD, their roster woes have been the bane of their existence this whole season—and the effects can still be seen today. They will have to dig pretty deep to get far at this competition, or so it would seem.

Catch the second day of ESL One Los Angeles CN tomorrow, on the official ESL Dota 2 Twitch channel. Stay tuned to Hotspawn for further coverage of the online league!