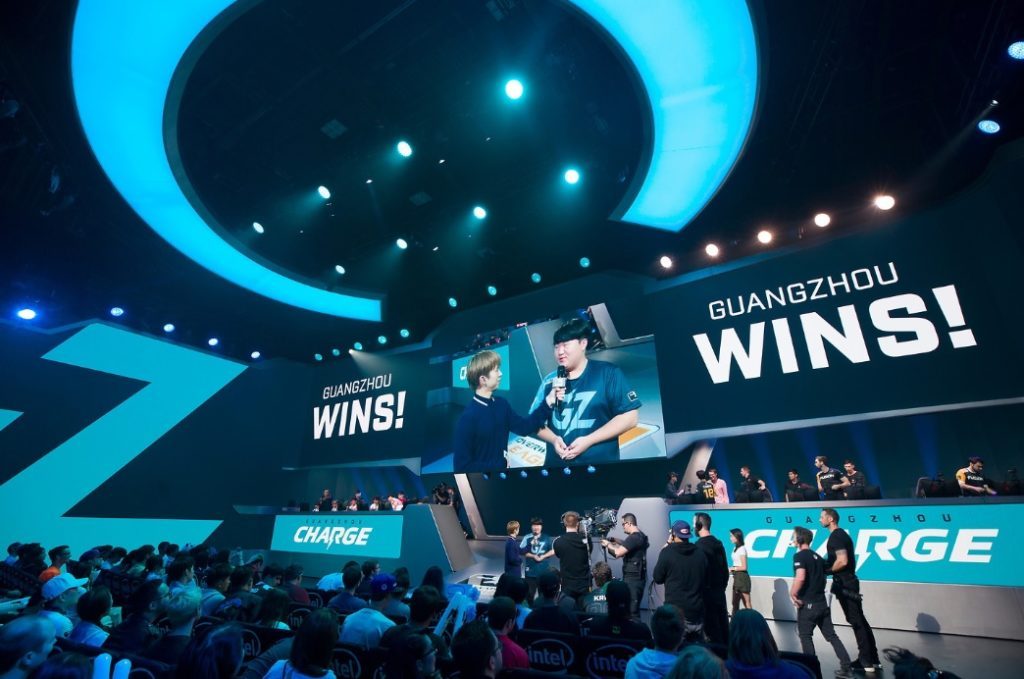 The qualifiers for the May tournament are heating up, with the Charge and Mayhem leading their regions. (Photo courtesy Robert Paul - Blizzard)

The Vancouver Titans debuted their brand new roster on Saturday, after parting ways with all of their former players and coaches this past week. On very short notice, Vancouver tapped six Tier 2 players to join their entirely new roster. The Titans also returned to the North American region of competition this week, after competing in the Asian division for several weeks.

The new squad struggled to find success in both of their matches, losing to the Washington Justice 3-1 on Saturday and the Florida Mayhem 3-0 on Sunday. They ended up only winning a single map the entire weekend. Although the debut wasn’t ideal, it’s difficult to expect much from a team who has barely had any time to practice together before playing in the Overwatch League. Even the worst Overwatch League team is better than the vast majority of Tier 2 teams, so these matches must have been a huge adjustment for these rookie OWL players.

The good news is that all of the Titan’s new players showed off impressive individual skill. New DPS Dalton “Dalton” Bennyhoff, in particular, played exceptionally in week 14. This team definitely has potential to win once they have had the time to sit down, get comfortable with each other, and actually practice together.

This past week, the Washington Justice announced the retirements of both Corey “Corey” Nigra and Ethan “Stratus” Yankel. While Corey immediately left the team, Stratus played his final match on Saturday, helping the Justice defeat the Titan’s.

Not only did Stratus win his final OWL series, he also won Player of the Match for his world class Sombra performance. In his final match, Stratus proved that he isn’t leaving the OWL due to a lack of skill. In his post game interview, He said he will be transitioning to streaming and will likely be staying with the Washington Justice as a content creator.

The Florida Mayhem swept their second match in a row on Sunday, soundly defeating the Titans’ brand new roster. During the first week of qualifying, the Mayhem swept the bottom ranked Boston Uprising in a 3-0 victory. On Sunday, Florida conquered Vancouver’s poorly prepared new line up in a 3-0 stomping. Following the two convincing wins, Florida is in the top qualifying position with a 2-0 record and a +6 map differential.

In their win over the Titans, Florida’s DPS showed off their high level of skill. Both Sang-bum “BQB” Lee and Jun-ki “Yaki” Kim are world class DPS players and that showed against the less experienced Titan’s team. Yaki put on a great performance as Echo and was named player of the match for his high impact plays.

Although Florida is far from the best team in North America, they have shown themselves to be capable of great things over the past month. The Mayhem started out the season with a very tough schedule, playing against the likes of the Philadelphia Fusion and the New York Excelsior. They struggled to find success against these high tier teams in the early weeks of season 3. However, they have really turned it around in the past few weeks. Ever since their sound win over the Paris Eternal in week 11, the Mayhem have looked like a whole new team. If they are able to beat the Washington Justice next week, they will likely be able to secure the #1 seed in the upcoming tournament.

After winning two matches in week 14, the Charge have are currently sitting in the #1 qualifying spot for the Asian May tournament. The Charge defeated the NYXL 3-1 on Saturday, and claimed the win over the London Spitfire 3-1 on Sunday. In both matches, the Charge utilized a very aggressive dive style which overwhelmed their opponents.

Gaungzhou Charge started out Season 3 with mixed levels of success, looking very strong in some games and looking mediocre in others. Coming into the May tournament qualifiers, Gaungzhou was sitting on an unimpressive 5-6 record. However, during the qualifier weeks they have seen unexpected success, going 3-0 with a 7+ map differential over the first two weeks of qualifying.

Not only have they won their matches, they won matches against challenging opponents. In the past two weeks, the Charge have defeated the Seoul Dynasty, NYXL, and London Spitfire, all of whom sit within the top six places on the OWL standings. With their ever increasing momentum, the Charge have put themselves forward as a strong dark horse contender in the upcoming tournament.

After three disappointing losses in a row, the Seoul Dynasty finally caught a break on Saturday, defeating the top ranked Shanghai Dragons in a close 3-2 bout. Seoul’s impressive victory broke Shanghai’s running eight game win streak and showed that the Dynasty are still a contender. The Dragons’ loss was only their second loss of the season.

The match was an intense back and forth affair, with the two teams trading maps throughout the series. Ultimately the victor was determined by a single point on the final control point map, making the match, essentially, as close as possible. Ultimately, the Dynasty were able to clinch the final teamfight and take the victory.

After a very strong 2-0 start to their season, the Dynasty have since struggled to find success. They moved back to Seoul from L.A. in April, which placed them back into their original Pacific East division. The North American and Asian regions tend to play Overwatch a little bit differently, which takes some time to adjust to. On top of the meta differences, the Dynasty also had to adjust to their new living arrangements and playing OWL matches online. However, with their impressive win over the Dragons on Saturday, the Dynasty look like they feel at home again.

After an extended 10 week break, the London Spitfire returned to Overwatch League competition this weekend. The Spitfire relocated their team to Korea since they last played, making this week their debut in the Pacific East division. In their match on Saturday, London swept the Chendgu Hunters in an explosive return to form, then on Sunday they lost their match to the Charge in a 1-3 fashion.

The Spitfire have been highly ranked all year, but they have yet to face a serious test of their skill. At the beginning of the year, they lost all of their matches against highly rated opponents like the Paris Eternal and the New York Excelsior. On Saturday, they defeated the poorly rated Hunters and on Sunday they lost to the well respected Charge. Looking at their season record, it’s difficult to say if London Spitfire is a force to be reckoned, or if they are overrated.

In week 15, the Spitfire will face the largest test in Asia, going up against the Shanghai Dragons on Saturday. If London can manage to defeat Shanghai, that would make a huge statement about their competitiveness in the Asian region going into the May Madness tournament.

Led by MVP candidate Jae-hyeok “Carpe” Lee, Philadelphia easily dispatched the Dallas Fuel on Sunday in a 3-1 blitz. Although the Fuel have been on a hot streak and their DPS played very well on Sunday, the Fusion’s tank and support core made fewer mistakes and played with more discipline, which was what ultimately swung the match in Philly’s favor.

The Fusion continue to put on strong performances week after week, showing very few weaknesses. The Fusion have clearly demonstrated that they are currently the best team in North America.

Despite their nearly perfect season record, Philly is currently only sitting in the fourth qualifying seed for the May tournament. This is because, although they have a 2-0 record, their match against the Eternal last week was a 3-2, which hurt their map differential. Next week they will have the opportunity to improve that map differential against the Vancouver Titans. Philly is a heavy favorite to win that match, especially considering the weak performance we saw from the Titans this week. 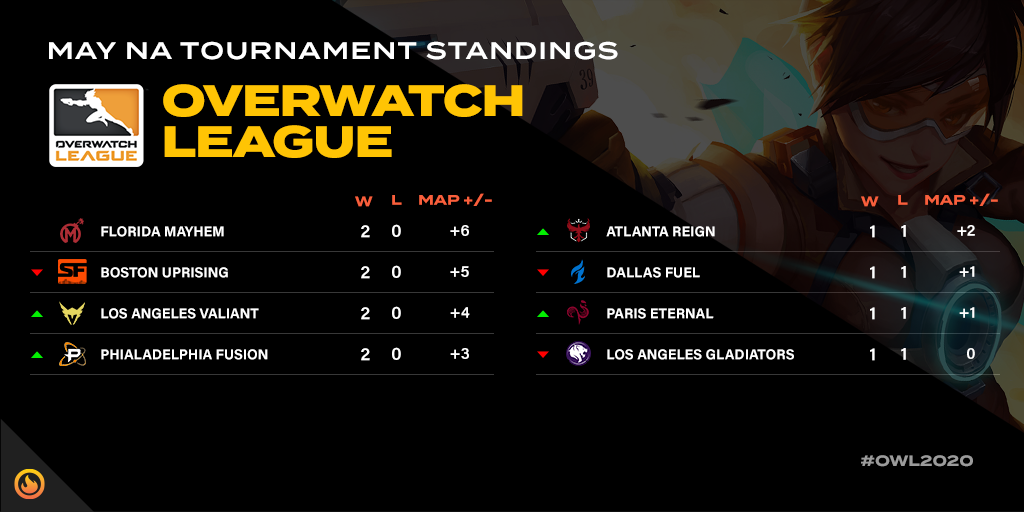 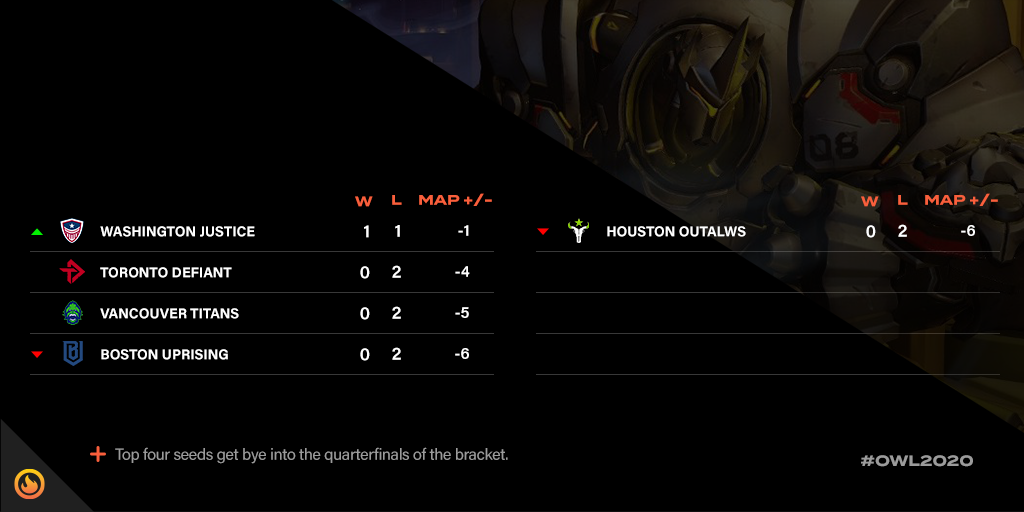 In North America, the Florida Mayhem, San Francisco Shock, Los Angeles Valiant, and the Philadelphia Fusion currently hold the top four qualifying slots. Those top four will advance directly to the quarter finals, whereas seeds 5-13 will have to earn their place in the quarterfinals through a knockout style tournament. 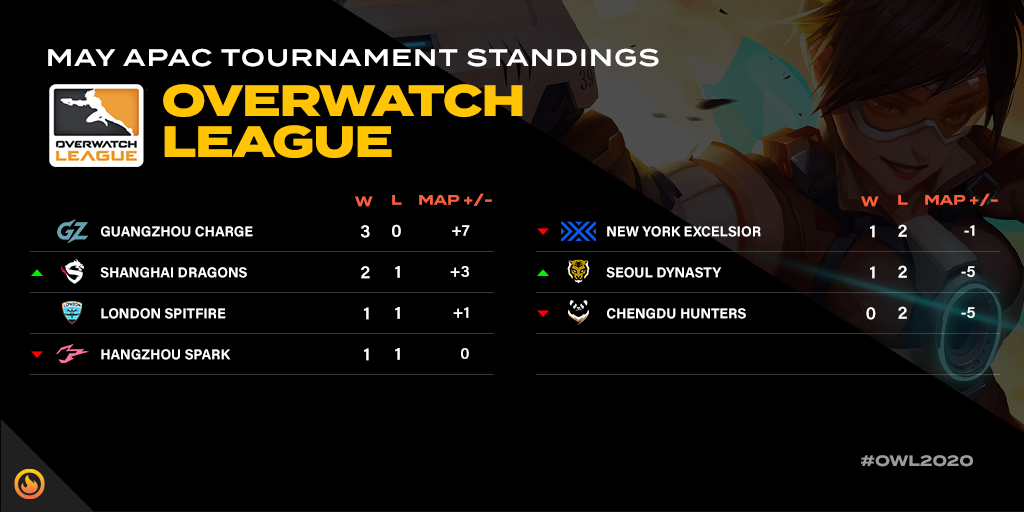 In Asia, the Guangzhou Charge, Shanghai Dragons, and London Spitfire are leading the pack. Since the Asian region is smaller, all teams will be competing in the quarter finals tournament, and the top seed will advance straight to semi-finals.

What to expect in week 15

Week 15 will feature twelve matches, with seven hosted on Saturday and five hosted on Sunday. Next week will conclude the qualifiers for the May tournament, which is scheduled to begin in week 16. Mei, Tracer, Orisa, and Moira will be unavailable from the hero pool.

One interesting match to watch will be the Houston Outlaws facing off against the Vancouver Titans. Both teams are currently in the bottom three seeds, looking to avoid the low seed knock out match which will determine whether the 12th or the 13th advances into the North American tournament bracket. As it stands now, the loser of this match will face the Boston Uprising in the knockout round.