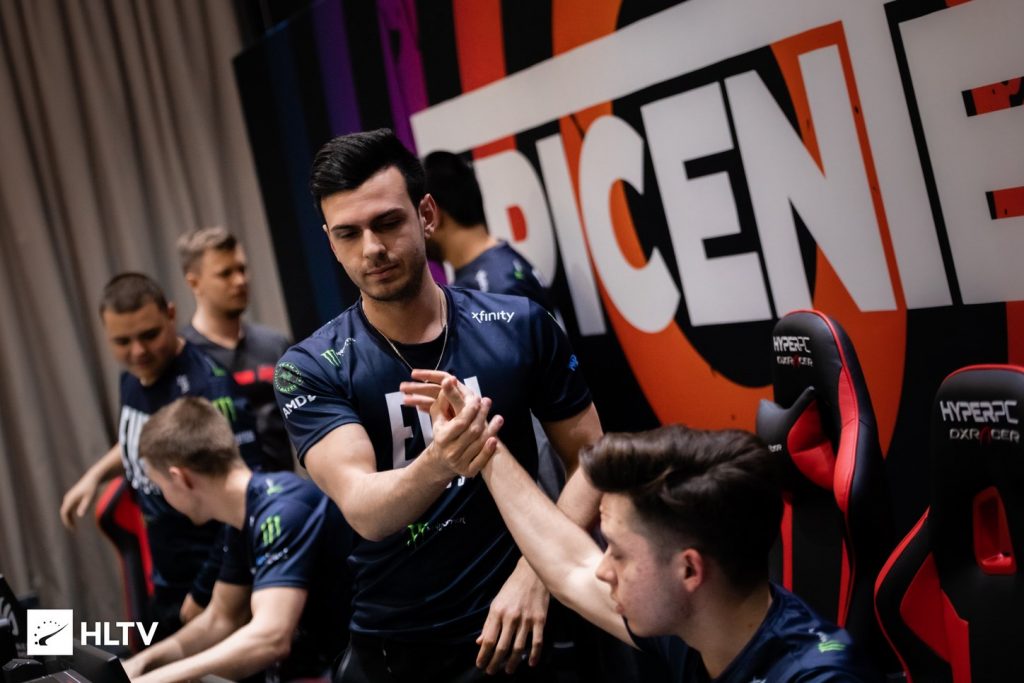 EG have completely dominated their group at ESL One Cologne, earning a top seed in playoffs. (Photo courtesy HLTV)

The North American side of ESL One Cologne has completed its Group Stage. Unlike the European side, only eight teams were competing. Half have been eliminated, leaving just four hopefuls to fight for the crown. The matches almost all went as expected, but with one big outlier. Stunningly, Chaos Esports Club came out swinging in Group A to earn first seed. FURIA finished right behind them. In Group B, Evil Geniuses cemented their spot as the favorite NA team while Liquid crossed the finish line in second.

The first match of ESL One Cologne NA was one of the most one-sided matches on paper. FURIA was set to take on Chaos in what should have been an easy matchup for the best Brazilian team in CS:GO. What happened was the complete opposite. Chaos slammed one of FURIA least favorite maps in Nuke then cleaned house.

Chaos lost the pistol round, then went to work. Their well-planned offense exposed FURIA’s weak points, allowing them to take a 7-4 lead. Jonathan “Jonji” Carey and Joshua “steel” Nissan popped off on the T side, earning a total of 30 frags and 210.9 ADR. Although FURIA did manage to take back a small 8-7 lead at the half, the damage was done. Chaos’s CT side was even more effective at shutting FURIA down. Once Chaos had guns, they won the last eight rounds in a row to take the 16-11 victory.

Now, Chaos had to contend on FURIA’s home turf of Inferno. They did a surprisingly good job early on the Brazilian’s most played map. Their 6-1 lead did dwindle by the end of the half, but Chaos still held the one round advantage. Their T side also started off really well, extending their lead to 13-8.  Still, FURIA were no pushovers. Henrique “HEN1” Teles led the way for FURIA to win seven of the next eight rounds and earn map point.

Chaos managed to win round 30 and force overtime. After two OT periods, it was the scrappy underdogs who took the 22-19 victory and swept the group favorite.

THIS MAN HAS THE BIGGEST BRAIN ON THE SERVER 🧠@JoshNissan hides on site to win another round 🐱‍👤 https://t.co/Z8HYtaIAYd #ESLOne pic.twitter.com/9m2SdguiDN

Chaos would face off against 100 Thieves for the first playoff spot in Group A. Both teams were able to secure their map picks with relative ease. Chaos put up a stalwart defensive performance on Nuke to earn a 16-10, while 100 Thieves ran all over that defense on Inferno for a 16-6 victory. The match came down to a winner-takes-all on Mirage.

100 Thieves took the first pistol round, but then Chaos fought back with their initial buys. With both teams battling for economic supremacy, Nathan “leaf” Orf pulled off a crazy 1v4 on 3 HP to give Chaos the momentum.

Chaos secured a 9-6 lead from the T side before winning the second pistol round to go up 13-7. 100T tried to come back into the game, but their deficit was just too huge. Chaos closed out the map 16-13 to earn first seed.

It only got worse for 100 Thieves as FURIA was awaiting them in the decider match. FURIA kicked off the festivities with an absolutely brutal 16-1 victory on 100 Thieves’ Inferno pick. Still, the Thieves showed great tenacity and managed to pull out a 16-13 on Mirage to force a tiebreaker. Unfortunately for them, they ran out of steam and gave up 13 rounds to the Brazilian Vertigo offense. FURIA took the final playoff spot in Group A with the 16-7 result.

Over in Group B, Evil Geniuses made the biggest statement of ESL One Cologne so far. In their road to first seed, EG swept every game while not giving up double digit rounds once. Triumph were the first victims. They couldn’t get anything going on their own Overpass pick and lost 16-6. Evil Geniuses then took them to school on Inferno by winning 11 rounds on T side then nearly shutting Triumph out. The 16-5 result put EG through to the winners’ match.

Awaiting them was Team Liquid. While the match should have been a battle between NA’s best, it very quickly turned into a one-sided affair. After taking a slight 8-7 advantage on Liquid’s Mirage, EG actually did pull off a perfect attackers’ half to end the map 16-7.

The exact same pattern followed on Nuke. EG’s T side won the first half 8-6 before they almost shut Liquid out with an unbreakable defense. Ethan “Ethan” Arnold led the way for Evil Geniuses with a 54-26 K-D ratio and 108.2 ADR. Meanwhile, no Liquid player earned a positive K-D in the rough match. Overall, EG played just over 100 rounds on their way to playoffs, far less than any other team.

The real rivalry in Group B came between Liquid and Cloud9. The two squads met in round one where C9 took map one on Overpass before losing two in a row on Vertigo and Nuke. C9’s victory over Triumph in the elimination match ensured a rematch with playoffs on the line.

C9 once again took the match to Overpass. The first time, C9 managed to scrape a 19-17 win over the favorites. Now, the match was just as competitive. Liquid did find a big 10-5 advantage from T side, but C9 matched them in kind. The map went to Overtime yet again, this time with Liquid landing on the right side of it. A 19-15 win put them on match point.

However, Cloud9 would not be easy to beat on Liquid’s own map of Vertigo. After losing the pistol round, Aran “Sonic” Groesbeek found an ace to put C9 on the board. Using that momentum, C9 snowballed out to a 10-5 lead at the half.

C9 even won the second pistol, putting them in a good position to close out the game. Unfortunately for them, Liquid unleashed the beast. Michael “Grim” Wince was absolutely instrumental in Liquid’s CT side performance. After clutching the second-round force buy, Grim found tons of kills everywhere he went. His insane 18-2 K-D ratio was accompanied by 131.7 ADR and a 2.37 HLTV rating. With Grim at the helm, Liquid won every single round left in the game to secure the 16-11 victory and the final playoff spot.

Only four teams remain in the battle for ESL One Cologne glory. There is hardly any time to rest for playoffs, so the first seed teams have had much more time to prepare for their opponents. The Semifinals schedule looks like this:

Which of the three highest rated teams in NA will take the trophy, or will Chaos pull off one of the biggest underdog wins in the game’s history? ESL One Cologne has a ton of action packed CS:GO ahead.