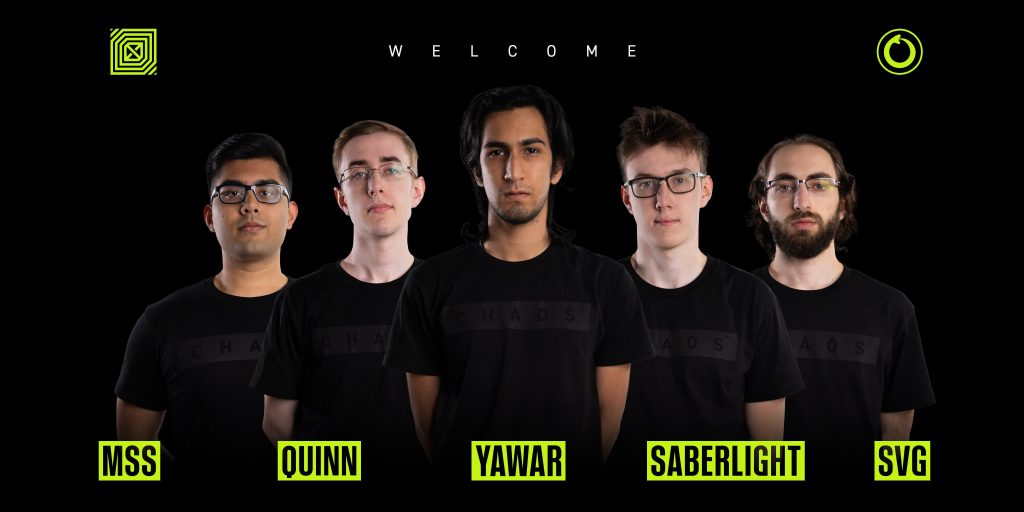 After slowly hemorrhaging players since the end of their The International 2019, Chaos Esports Club finally has a brand Dota 2 new roster: the Quincy Crew. The NA stack was officially announced as the latest members of Chaos EC in a post on the team’s official website made earlier today.

Our organization was born in Dota 2, and it is with great excitement that we announce the addition of Quincy Crew.

As previously mentioned, Chaos EC’s TI9 roster had all but disappeared in the months after the event. Star carry player Lasse Aukusti “MATUMBAMAN” Urpalainen announced a break from the game in late August, and other members departed to join other teams shortly afterward. MATUMBAMAN would eventually cut his break short to join the new Team Secret lineup.

The incoming Quincy Crew roster is made up of veterans of the North American Dota 2 scene, centered around mid-laner Quinn “CCnC” Callahan. The team most recently struggled to a 9th-10th place finish at ESL One Hamburg 2019 – a result that was almost certainly influenced by an untimely illness which afflicted CCnC, and forced the team’s forfeit of their series against Ninjas in Pyjamas.

The result was also not representative of the team’s other recent performances, which saw them secure a spot at the Dota Summit 11 Minor after victory in the North American Qualifier. The squad also narrowly missed out on securing a trip to the MDL Chengdu Major.

Not all of the Quincy Crew roster has officially been signed though. CCnC, Yawar “Yawar” Hassan, Arif “MSS” Anwar, Avery “SVG” Silverman, and coach KBBQ have been as members of Chaos EC; off laner Jonáš “SabeRLight-” and coach Volek Ilya “IllidanSTR” Pivtsaev are still set to undergo more tryouts with the team.

“Coming into the 2019-2020 DPC season we wanted to field a North American roster and Quincy Crew came as a natural fit” said Jared Fletcher, Chaos EC’s General Manager, in the announcement. “They share a passion for winning and constant learning that is necessary to becoming a world champion team, and it is my belief that we can work alongside them to build an enduring Dota 2 program.”

In their announcement, Chaos EC hinted at yet more roster moves and acquisitions. The team posted a tweet along similar lines yesterday, and the signing of a new Dota 2 roster seems to be the opening salvo in this campaign.

We're adding 17 new members to our organization this month.#CreateChaos

Chaos EC’s new roster will debut at the DOTA Summit 11 Minor, which is set to begin on Thursday, November 7. For information about the roster move, and the full announcement, check out Chaos EC’s official website.