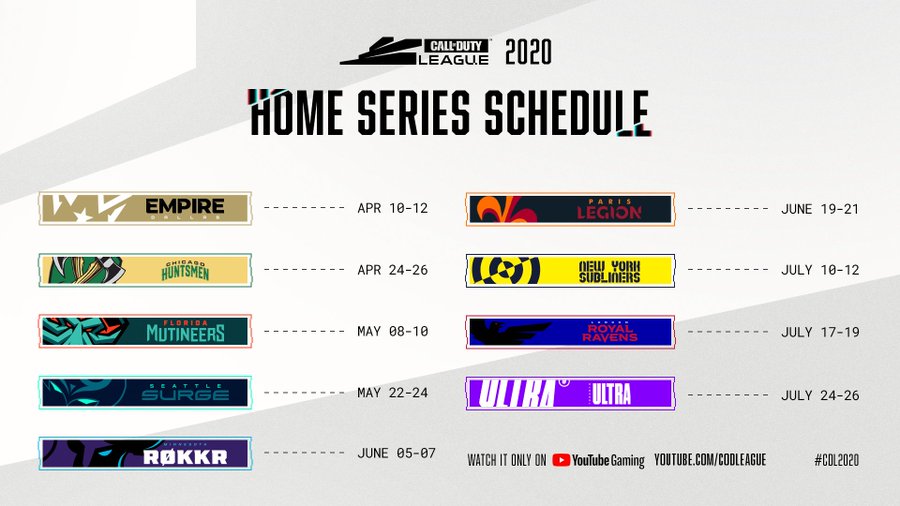 The Call of Duty League returns this weekend with the previously scheduled Dallas Empire homestand. The league announced the new online format and schedule which will have homestand matches played every two weeks throughout the next four months.

All nine of the remaining CDL Home Series events will be played on a Friday through Sunday schedule. Each event will begin at 1 p.m. PDT on Friday, and Saturday matches begin at 10 a.m. PDT. Each event will also feature the same teams originally scheduled going head to head from remote locations.

The Call of Duty Challengers events will also take place in an online format alongside the professional events, and the CDL will host five two-day Challenger events with a $50,000 prize pool in all three regions.

The CDL canceled all remaining home series events last month in response to the COVID-19 pandemic. The CDL’s promises to deliver the same intense action the previous home series events provided while keeping all participants safe:

“This new format also preserves the same competitive fire that fans witnessed at live events held earlier in the season. The action, intensity, rivalries, play-by-play, and good old-fashioned smack talk… while also giving players and teams the most safe and fair way of competing remotely.”

The Call of Duty League has not released information about the 2020 Call of Duty Championship weekend and promises to update fans at a later time.

All remaining home series events will be broadcast live on the Call of Duty League YouTube channel.