Can 1907 Fenerbahce Shock the World in the MSI Play-In? 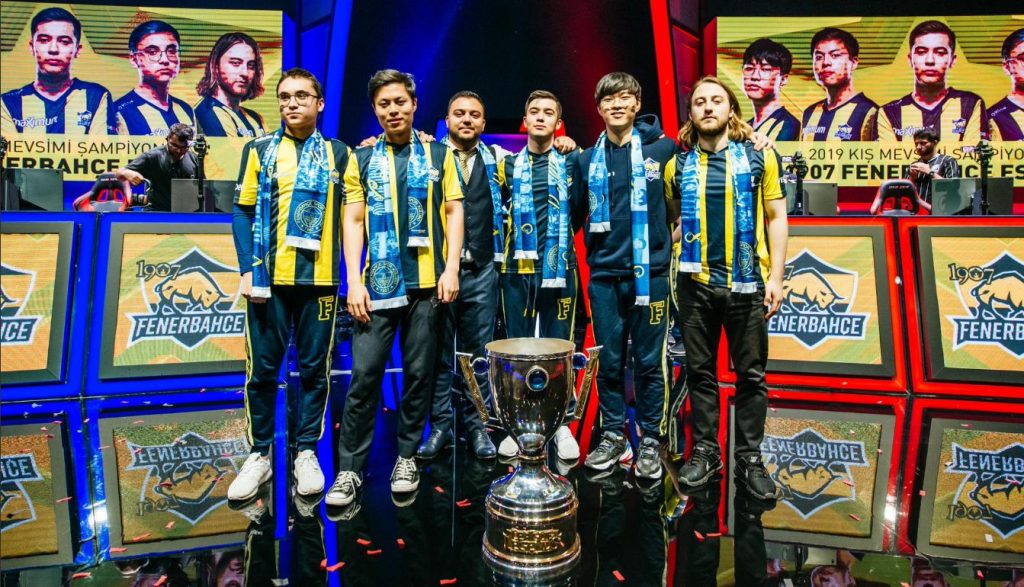 Known around the world for their curious demand at the last international event they attended to have casters always include the “1907” section of their name, Fenerbahçe Esports is again Turkey’s representative at the Mid-Season Invitational.

Drawn into the “group of death” alongside host representatives Phong Vũ Buffalo, Argentinian powerhouses Isurus Gaming, and Oceania’s champions the Bombers, Fenerbahçe certainly doesn’t have an easy road ahead of them. That’s not necessarily a problem for the Turkish champions, however. In their own domestic league, they were never supposed to win.

The Road to the Mid-Season Invitational

In the minds of fans, pundits, and even other teams, defending champions Bahçeşehir SuperMassive were the clear favorites coming into Turkish Champions League 2019 Winter Season. Upgrading their victorious roster with Fenerbahçe’s veteran Tae-il “Frozen” Kim, and SK Telecom T1’s veteran support Jae-wan “Wolf” Lee, it seemed obvious they would return to the Mid-Season Invitational after their 2018 appearance.

Comparatively, Fenerbahçe had a major overhaul from the roster that had earned them a place at the 2017 World Championship. The two biggest departures were top laner Berke “Thaldrin” Demir and mid laner Frozen. The team’s two solo laners had been focal points for the Turkish side for nearly two years, and at the beginning of the 2019 season, both left.

While SuperMassive had picked up a two-time world champion import in Wolf, Fenerbahçe had to settle for Thomas “Kirei” Yuen. The Dutch jungler had last been seen in a top-level league in the LCS with Dignitas, when the team dropped into relegation with a 4-14 record.

The new Fenerbahçe roster, built around Kirei and Hyeong-min “Ruin” Kim, turned out to be a masterstroke for the organization. Combining the European import with their new Korean-born top laner, the team marched to a first-place finish off the back of a 16-2 run in 2019.

While Ruin and Kirei (who would go on to claim Most Valuable Player, the top jungler award, and the fan-favorite vote) dominated the top side of Summoner’s Rift, rookie mid laner Onur “Bolulu” Can Demirol carved out a name for himself in the center of the map.

Signed from European organization Diabolus Esports, Bolulu was named Rookie of the Split in his first Split with a top-level team. On paper, Fenerbahçe may not have assembled a championship roster. In practice, they secured the esport club’s second international berth.

How Could the Turkish Champions Shock the World?

The Mid-Season Invitational’s group of death may just be the perfect scenario for a team that is used to being written off.

There’s a lot of elements that tie Fenerbahçe together as they head into the Mid-Season Invitational. For anyone that has been paying attention, however, there’s one clear path to victory for the Turkish titans—complete and absolute domination through the top lane.

According to sources close to the organization, everyone on the team knows that too. While the mid and bot lane held their own in the TCL regular season, the tournament’s grand final was a duo-carry effort from Ruin and Kirei. It makes sense then that the team’s mainline strategy takes just one form—draft top lane advantage and plenty of it.

That means there are three key matchups that Fenerbahçe are going to be worrying about heading into next week. They come in the form of the three enemy solo laners in Group A, all of whom have their own unique play styles and skills.

First up, Uruguayan top laner Mateo “Buggax” Aroztegui. The Isurus Gaming star has a versatile champion pool, shining on Urgot throughout the regular season with an 80 percent win rate before cracking out five games of Ornn in the elimination matches.

Between his Vladimir, Hecarim and Kennen choices, it’s clear the South American representative comes prepared for any situation. Ruin will have to be careful too— his first opponent has a number of interesting pocket picks prepared, including Riven, Yasuo and top lane Fizz.

After his Uruguayan challenge, Ruin and his jungle partner Kirei move on to the lethal combination of rookie of the split Hyun-jin “BalKhan” Choi and Oceanic MVP Ju-seong “Mimic” Min. The Bombers duo rampaged through their Australian adversaries, leading the Essendon team to a 19-2 record in the regular season. They polished off the clinical split with a 3-0 victory in the grand final and set their eyes on the best finish Oceania has ever seen.

BalKhan is similar to Fenerbahçe’s Bolulu—it’s his first professional split of League of Legends, and he’s already turning heads. Brimming with confidence, and eager to prove to the world he belongs in front of the competitive esports computer, Choi has nothing to lose and everything to prove as he faces Ruin and Kirei.

Finally, the Turkish representatives face perhaps their biggest challenge of the opening day – host team Phong Vũ Buffalo. It’s not just the backing that the Vietnamese esports club will have, however. Phạm “Zeroc” Minh Lộc, the team’s young top laner, was named VCS 2019 Spring split Most Valuable Player, clocking up 1100 points over the course of the season.

Alongside jungler Hoàng “Meliodas” Tiến Nhật, it’s all but guaranteed Zeroc will cause damage across the Rift. Supplemented by the region’s best support in Nguyễn “Palette” Hải Trung, who focuses much of his efforts into solo lane roams, Minh Lộc will stand as the “final boss” for Fenerbahçe’s talismanic top laner.

And then, once those three games have been played out for the Turkish team, they have to turn around 48 hours later and run the gauntlet of some of the best top/jungle duos in the entire Play-In phase.

So what’s the bottom line for Turkey’s greatest international hope in 2019?

If Ruin, Kirei, and the entire 1907 roster make it through to face Team Liquid at the end of the group stage, it will be about as deserved a qualification as anyone would have seen.

This Group A top lane and jungle pool is almost ridiculous in its talent and stardom dripping from the solo lane that was once left to play alone for the first 20 minutes of the battle across the Rift.

And here’s the clincher: major tank buffs in the last two patches by Riot has left the entire lane in a state of confused disarray, as its inhabitants try to figure out the best champions ahead of the international tournament.

We’ve already seen colossus tanks like Nasus return to the meta, while bruisers in the form of Darius, Jax and even Urgot have stayed strong throughout the changes. Hecarim has emerged as an interesting new pick, while Kennen has returned to the meta after years in the locker room.

Finally, Isurus Gaming fans will be celebrating the return of Riven to the top lane meta, as Buggax is likely eager to crack the Exile champion back out in front of the world.

The perfect time for Turkey to return

For Fenerbahçe, this is the perfect chance to show the world that Turkey demands respect.

After the exploits of the GIGABYTE Marines at the Mid-Season Invitational and the World Championship in 2017, many fans began putting Vietnam above Turkey in the world rankings. SuperMassive had forged a path for the Turkish scene with a 6th place finish at MSI, followed by two straight seventh-place finishes, but all that was forgotten in the excitement of the Marines.

SuperMassive may not be returning to MSI, but Fenerbahçe can take up the legacy of the owl-decorated team. If they can take the fight to Vietnam in their own backyard, and prove they deserve a seat at the big boys’ table, people will have to take notice.

It’s especially important that Turkey win the battle against Vietnam for now. Between the LMS weakening year on year, and Turkish resident Sergen “Broken Blade” Çelik showing the world there’s major talent in the TCL, all eyes are on the Şampiyonluk Ligi representatives.

Now is the time to show the entire League of Legends fandom why Turkey should be respected and feared.

Ruin, Kirei and the entire 1907 Fenerbahçe Esports roster will begin their quest toward the main stage of the tournament an hour later, at 4 a.m. PST. They will face Isurus Gaming in their opening match.

And just finally, according to diehard fans of the Vietnamese league, keep an eye on Kirei between the 10th and 12th minute of every game he plays. Apparently, he has an unbridled love of defeating the Rift Herald between those minutes. Keep your eyes peeled and you might see he gunning for the neutral object even earlier than that too.

Watch all the MSI 2019 action live at twitch.tv/riotgames, or on the YouTube stream.