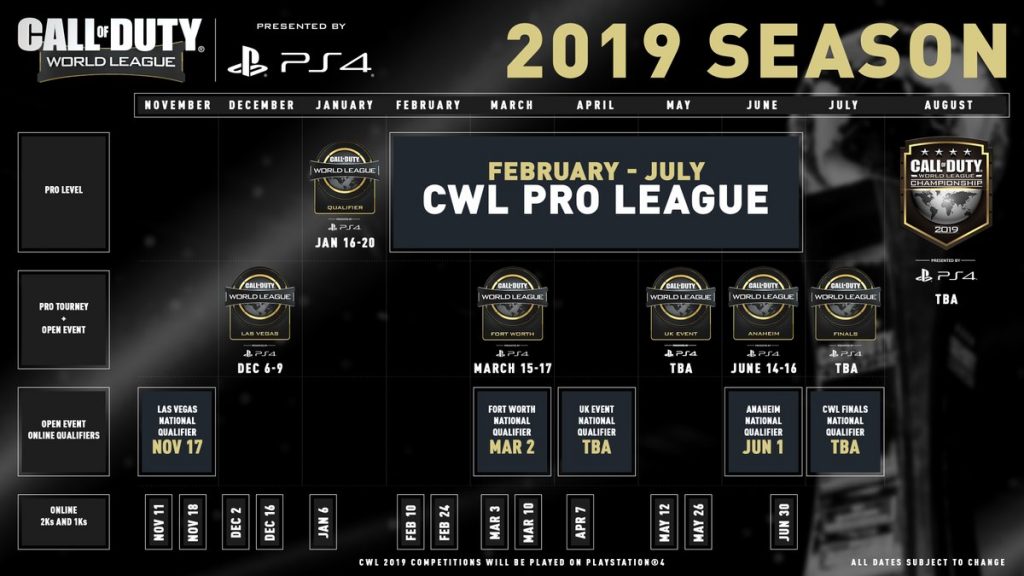 The CWL will be heading to Fort Worth, Anaheim and the United Kingdom in 2019.

The Call of Duty World League announced the final locations for the 2019 year during the first day of CWL Vegas. The final locations will be in Fort Worth, Texas, Anaheim, California, and a yet to be determined location in the United Kingdom.

The three announced events will be open events, like this weekend’s CWL Vegas. Players will be returning to Fort Worth, Texas for the event from March 15 to March 17. Call of Duty will be dropping back into Anaheim on June 14 to 16. The last open event to be announced will be taking place in the United Kingdom in May, however exact details were not available.

The CWL postseason is usually held at the MLG Arena in Columbus, Ohio. There was no official word on where the postseason and finals will be played, but the past two years have been at the studio. The CWL Pro League qualifier will decide the last 12 teams to participate in the CWL, will take place from January 16 to January 20.

The Call of Duty World League released the full schedule for 2019 including online 2Ks, open and online qualifiers, pro tournaments, and pro level events. The top four teams to finish in this weekend’s CWL Vegas will automatically qualify for the Pro League.