COD Scene Exploding Thanks to the Mysterious “CODBurner” 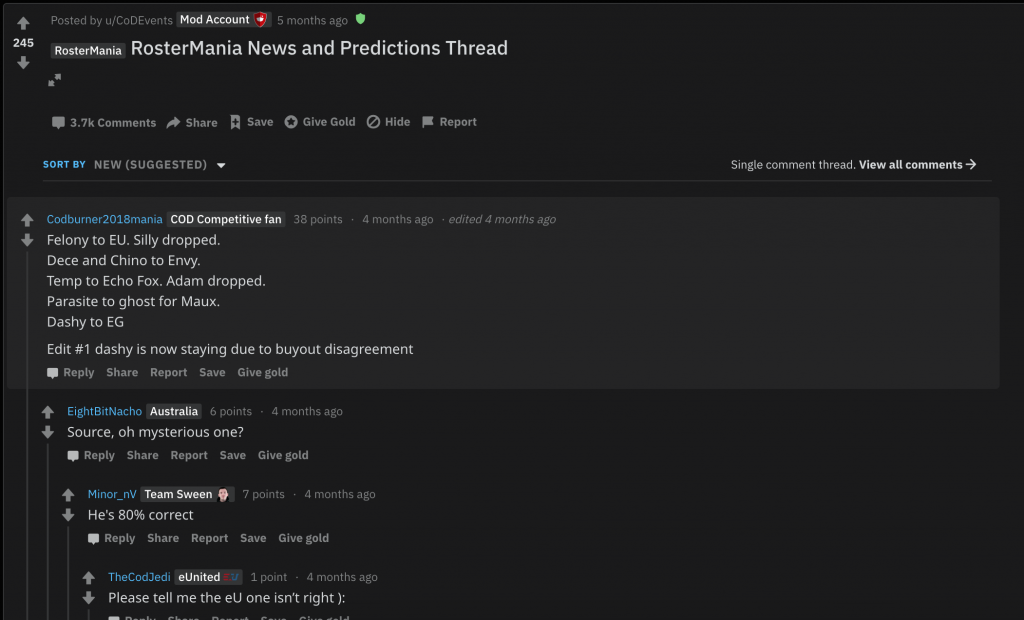 CODBurner has spent the past several weeks breaking news and revealing secrets of the Call of Duty scene on Reddit.

The Call of Duty: WWII season was full of rosters that disintegrated into mediocrity, while some rose to the occasion and proved everybody wrong. Last year’s Champions, OpTic, was looking to come back swinging as Call of Duty returned to boots on the ground gameplay, but they couldn’t even manage to take home an event win. OpTic was arguably the most upsetting team the entire season, as they changed their roster before Champs, swapping out two of the best players available at the time and changing their legendary lineup. This swap turned out to be a horrible gamble, as OpTic was sent packing before the weekend even started. Now, OpTic has changed their lineup already as they have dropped a player and fans are waiting for news on the other three players.

Each Rostermania is full of roster swaps, sales, drops, rumors, speculation, and petty drama all rolled into one. Fans and players are forced to sit back and wait months for the new Call of Duty to drop, and of course, they need to fill their time with entertainment. So far we have seen Thomas “ZooMaa” Paparatto appear on a Twitch show hosted by Rajj Patel. The show has four different girls choose between two different guys to claim the “King of the Hill”, which is marketed as a dating show. ZooMaa appeared on the show to defend Red Reserve’s Matthew “Skrapz” Marshall, who appeared on the show previously and was voted off. At the end of the show, ZooMaa was being hailed as a hero on Twitter while the girls were being shamed for being “two-faced”.

In the middle of all the drama happening between players and organizations, there has been a stranger lurking in the shadows. There has been an individual, or group of individuals, leaking roster announcements and other intel since the Spring, and goes by the name “codburner2018mania”. A burner account is an account somebody makes to cover up their real identity. Nobody knows why the CODBurner is leaking this information, and while fans are excited to have a slight look into the background, professionals are pissed that confidential information is being let out.

The CODBurner appeared in April during mid-season roster swaps. The first post was detailing some roster moves, and his information was correct as most of those announcements were made weeks later.  On April 26 the CODBurner finally left his mark with the scandalous “intel on OG” post that exposed that roster changes were coming for the legendary lineup. Again, fans were not sure if they could trust the CODBurner, but the roster announcement was made and confirmed weeks later on OpTic Gaming’s Vision show. Pros and organization staff were baffled that the CODBurner knew so much information, and was not trigger-shy about sharing the news they have received. Pros began digging to see if they could figure out who the CODBurner was, but nobody could come up with a solid name or proof. Even fans have gone scrambling looking for clues on who this person(s) could be.

The CODBurner took a break and stopped posting on social media for weeks, but he came back with a bang at the end of August. After Champs, the CODBurner has been active on Reddit almost every day, and there have been dedicated pages and subreddits created to track their every move.

All the information coming to light is electrifying for fans as they flock to social media to read about the latest development, especially since they have a peek inside behind the scene politics that come with esports and business. The CODBurner is not against sharing salaries and buyout agreements, as he has leaked several player’s salaries. FaZe Clan’s ZooMaa was particularly angry when his salary was released, which was not public knowledge. ZooMaa admitted that the CODBurner was about “80% accurate” and “very credible” about the leaks. ZooMaa hosted several streams with different CoD pro players to try and track down who the CODBurner could be. The streams ended with no solid proof and a lot of accusations.

The CODBurner is very much active and has “taken precautions” to keep their identity safe. Nobody knows who the CODBurner is, or nobody wants to admit who it is. Releasing confidential and behind the scenes information could damage their credibility online and offline. If this CODBurner is an employee of Activision, Blizzard, or CWL their leaks could lead to legal trouble. Following this thought process, if the CODBurner is a professional player, it would be safe to assume that their professional gaming career would be over.

Regardless of how the situation turns out, nobody can deny that this person(s) is bringing more eyes and attention to Call of Duty. The console shooter has been lagging behind other esports as League of Legends and Overwatch have gone into franchising deals, which helps boast massive prize pools. Some players get to play one weekend every year for their shot at $150,000 while other games, like Fortnite, offer gamers the chance at the same amount every weekend. There is no doubt that the community is spicing up, but at what cost? We have to enjoy the drama while it lasts.