Caedrel: “It Feels Like I Truly Have a Team Around Me” 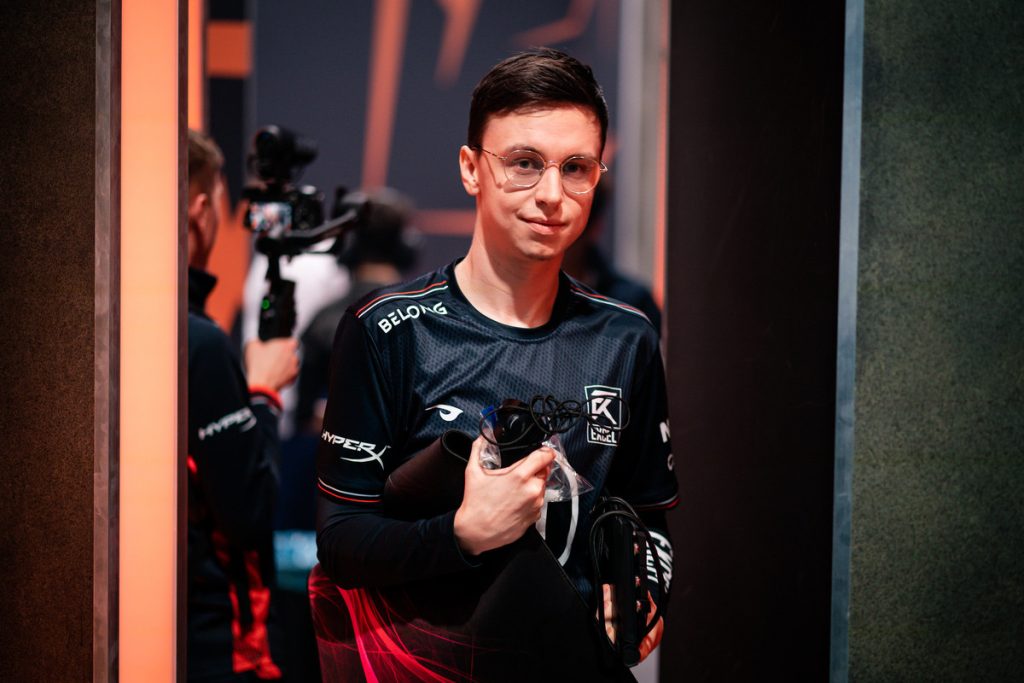 If it’s up to Caedrel, we’ll see him in the LEC for years to come. (Photo courtesy Michal Konkol for Riot Games.)

The upward trend is visible in Excel Esports’ run in the LEC Summer Split. Kicking off the Split disappointingly, the team is now playing more coherently and confidently with everyone on the team playing towards the same objectives. The results speak for themselves. After the team’s win against Schalke 04, Excel’s jungler Marc Robert “Caedrel” Lamont sat down with us for a talk. He spoke about his role as a veteran on Excel’s roster, how he helps rookies become comfortable with playing on the highest stage, and the longevity of his own career.

Hotspawn: I want to talk with you about your role within Excel. Since you are the longest-standing player on the roster, do you have a leadership role in the team?

Caedrel: In a sense, yeah. I wouldn’t necessarily say that it is something that stands out with this roster especially. I think with other teams it stood out a bit more. We mostly played with Koreans and a lot of new players, so I was the person who was on the roster the longest, as you said. I would be the ‘main voice’ in those rosters. But in this team, we’re just five players who are really good friends, so there’s no one that stands out as ‘the leader’ or anything like that. I would say that we’re just a group of guys who get along well.

For me, that’s the biggest difference compared to when I started at Excel two years ago. It feels nice. There’s a lot less burden on me, and I get to do more practice.

Hotspawn: Did it feel like a burden when you had to take that leadership role with previous Excel rosters?

Caedrel: Kind of, yes. In old iterations of the roster, I put a lot of blame on myself. I criticized myself to make it seem like the team overall was better. I was the main person that was being interviewed, that was being talked to, that people looked at for results. But now it feels like I truly have a team around me. They are willing to make a sacrifice themselves when they need to, but they can also step up when they can. It’s really nice. I think they’re really good.

It was always on me to get us ahead, and then from there the game progressed.

Hotspawn: Has that change, from you being ‘the guy’ the team hinges on to being ‘a guy on the team’ been a gradual change for you?

Hotspawn: Are there still moments where your seniority manifests itself?

Caedrel: Well, it has been almost two years that I have been with Excel. It’s kind of my home, in a way. It’s the team I have been the longest on. I trust them in their decision making. When they put this roster together, I was really happy with it.

Hotspawn: What about the other way around? Do you notice that they trust you with a lot too?

Caedrel: They do put a lot of trust in me, yeah. They really value my opinion, which I really like from an organization or team. They take into account what I think is good or bad. They listen to what I think throughout the year, which I think is really nice. They are one of the few organizations that I’ve been with that treat me like a human being, and none of the others did it as much as Excel. Some teams just sign the player and then say: “Ok, go win.” Excel cares a lot more.

Hotspawn: As the player who has been with the team the longest, do you take an active role in making new players feel comfortable when they join the organization?

Caedrel: I think everyone has a job to make sure they fit in and that they’re enjoying their time here, regardless of the results. I definitely try to put in as much effort as I can to make them feel like they’re enjoying themselves outside of the game. When new players join—especially when they make the jump from ERL [European Regional League teams] to the LEC—it’s really important to make sure they fit in and that they’re confident so they can open up more and express their feelings. Sometimes players may be scared to open up, or are unsure if their opinion is right because of the fact that they just arrived to a bigger league. Or maybe they’re afraid to play the way they want to play. I think we’ve done a good job with [Kryze and Special]. They’re slowly coming out of their shells. 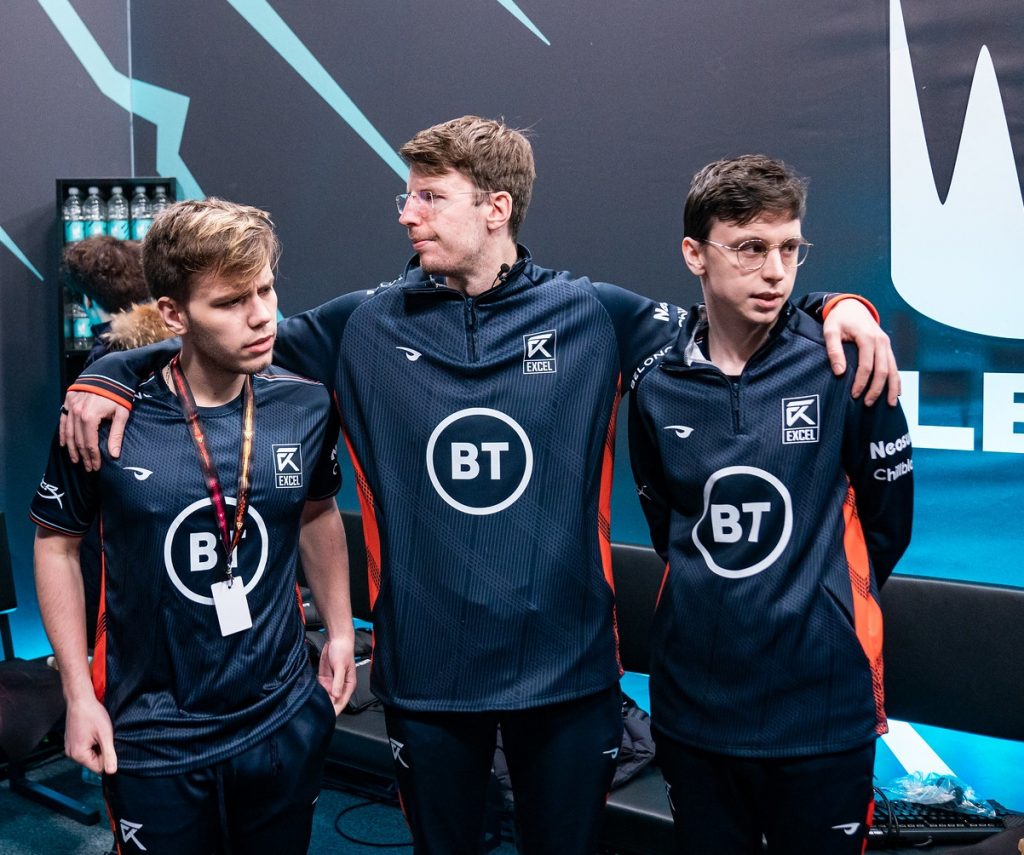 Hotspawn: What is something you do, as a player, to ensure your new teammates are comfortable about speaking their mind?

Caedrel: The most important thing is confidence, and being able to take both good and bad criticism. When a rookie puts his opinion forward and people agree, that obviously gives them confidence. When they share their opinion and they are told ‘no’ or shown that there are different ways, if they take it in a good way and they actually learn from it, then they won’t be afraid to say what’s on their mind and they will grow. But if they just stay quiet and just accept what they’re being told to do all the time, then the growth process is much slower.

Hotspawn: Do you like being a mentor for newer players in League of Legends?

Caedrel: Yeah I do. I think every pro player has to be open to introducing rookies to the league and playing with veterans. I think every pro player should listen to other pro players’ opinions and respect them. You should try and learn from it rather than instantly throwing away what people say, thinking you’re always right when you’re just being stuck up and stubborn. Being open-minded is super important.

Being open to it and giving rookies their chance is very important.

I think it’s a necessity for a player to do that. If you don’t, it’s going to be really hard to grow as a team with rookies on your roster. There are some veterans who aren’t very nice towards rookies I guess. But I think it’s really important, especially for players who have been in the LEC for two, three years, to realize that rookies are something they’ll all eventually play with if they continue with their career. Being open to it and giving rookies their chance is very important. When they join they’ll obviously make mistakes here and there, and they can be unsure. They need to overcome those hurdles. Once they’re actually unleashed they can be really f***ing good. Being patient is really important.

Hotspawn: When you were a rookie, did you have someone who helped you overcome those fears?

Caedrel: I would say that I didn’t really have players as my mentors when I was a rookie. Coaches were mentoring me more. I don’t think there’s anyone in particular that stands out, but I had a lot of friends on my teams in the past. Like Tore: on the old Schalke 04 roster I was really close friends with him, Upset, Memento and Smittyj. We were really good friends. I think that was the first team where I took a step up to pro play and made friends. I learned a lot about things outside of the game, like how to manage emotions and tolerate a loss. Growing as a person is really important. When I’m friends with the people I play with, that really helps me.

Hotspawn: You’re still actively playing at the moment. But if you look what comes next, after your career as a player, would there be an option for you to become a coach? Since you have this mentoring role you seem to enjoy.

Caedrel: Maybe. I’m not really sure. I think any pro player who has been in the scene for four to five years and wants to look at the future, deciding what to do when you retire, always branches out to those kinds of roles. But if they don’t want to stay in esports they can do whatever they want, obviously.

For me, it’s not sure yet. I’ll just keep playing. The average and mean age of pro players has been going up throughout the years. Five years ago, the average age of players was probably, like, 19? But now the average is probably more up to 21 or 22. Growing alongside players, especially junglers like Jankos for example, is kind of nice. They are still in their prime and they’re like a year or two older than I am. Or even Xmithie, who is almost 30, but he may be a more far-fetched example since he hasn’t had much international success. But the point is that I think the core value that the player has, the mental fortitude, really adds up towards the later stages of their career.

Hotspawn: So you still have many years to come in your career as a player, then.

Caedrel: Yeah definitely. I mean, Ambition was 25 when he won Worlds. He was married as well. If you look at the last two World Championships, there were quite a few players on those teams who were already married and stuff like that. I don’t know how long I will be playing League of Legends esports myself. But if you look at CS:GO, there are players in their thirties who still play on the top level. It’s hard to say how far that can go, because esports is kind of new still.

Excel’s next opponent in the LEC Summer Split is Misfits Gaming on Saturday, June 27th, at 6:00 pm PST.