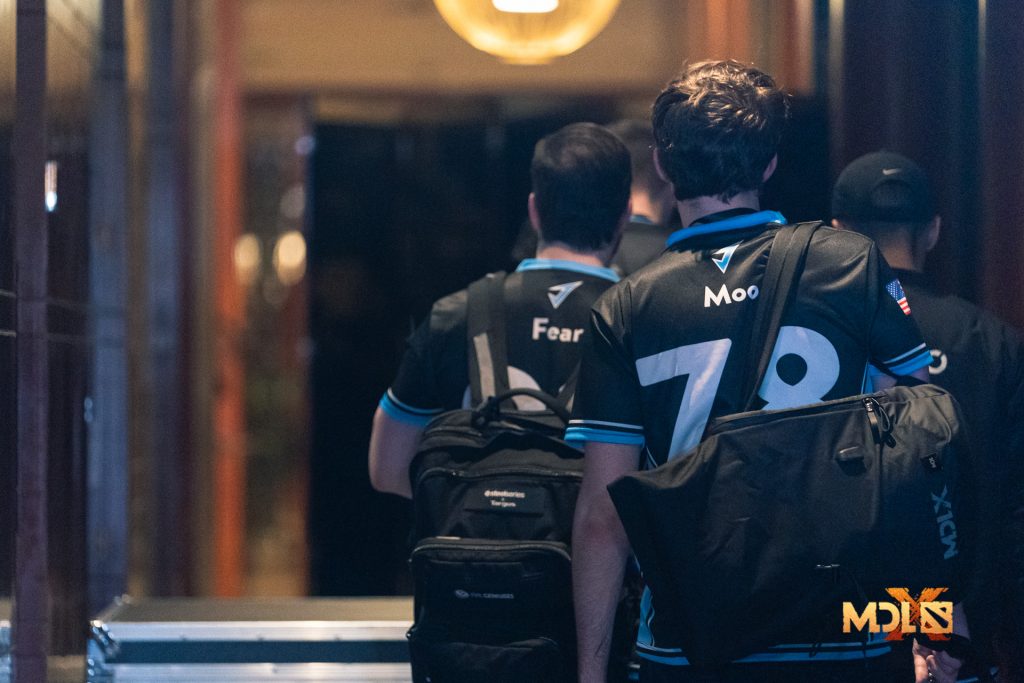 Another exit for business associates as they become the first team eliminated from the NA bracket of ESL One Los Angeles 2020. (Photo courtesy Mars Media)

After three days of close-cut matches in the NA bracket of ESL One Los Angeles 2020 Online we’re saying goodbye to our first team, as business associates find themselves eliminated. The squad fell to their opponent’s Evil Geniuses in a tight matchup which pushed both sides to the limit.

The final series of the day goes to @EvilGeniuses but not without a fight!

Congrats to both teams for doing their best and putting up an incredible show👏#ESLOne pic.twitter.com/pswnI2SNKL

Simultaneously, Quincy Crew vanquished foes CR4ZY to clutch their upper-bracket spot. The former Chaos EC squad is the strongest team in NA right now and proved it in two closely contested games. What’s more, with both matchups taking place at the same time, it felt very much like a race to the bottom for the two losing teams. However, ultimately some were racing quicker than others, with CR4ZY securing their lower-bracket spot in the playoffs after two losses.

With an undefeated Quincy Crew facing off against a team who’s only wins came against a business associates squad whose team captain disconnected, it was expected that CR4ZY would be on the losing end of this meeting. But the team wasn’t about to make it easy for their opponents.

After picking the Phoenix, which has been so effective in this region so far, for team captain David “MoonMeander” Tan, CR4ZY looked to create havoc for their opponents with as many fights as possible. But instead, the Phoenix failed to rise. In a lower downward spiral, CR4ZY lost control of their lanes, their structures, and eventually their base. While the team was able to pick off structures and farm up somewhat effectively, this game was never really out of their opponent’s hands. Despite taking 44 minutes to end, there was never a moment where QC looked like they might lose this game.

For game two, the squad tried something a little different. Taking away the pressure mid, which has been so deadly in the first game, CR4ZY picked away the Storm Spirit, and let Bryle go to work. For much of the early portion of the game, the roaming, ganking Spirit brother took control of this matchup. Until tragically, an awful fight from CR4ZY gifted the game to their opponents.

Ultimately this was a nail in the coffin for CR4ZY, who never recovered from this massive shift in gold back towards their opponents. With the loss, their playoff hopes rested in the hands of EG and whether the North American powerhouse could crush their opponents, the business associates.

Heading into the game against Evil Geniuses, the business associates need everything to go right for them. Not only did they need CR4ZY to lose 0-2 to Quincy Crew in a match they had no control over, but they’d also have to win their own game convincingly.

However, this was looking like too much of a tall order in game one. In an absolute stomp, EG rolled over their opponents in the quickest match of the NA portion of this tournament. It was a simple story. Every lane won, grabbed kills across the map, and pushed down towers efficiently. With almost no way to get back in the game, BA tapped out and called gg before even really attempting to defend their high ground.

But if EG thought their opponents would go down smoothly, they’d be sorely mistaken. Game two would be a long, drawn-out bloodbath, with each side desperately clinging to their lead. A drawn-out and scrappy laning phase would see the supports of either team feed deaths back and forth to the opposing carries, with Earth Spirit and Shadow Demon being the primary victims of their opponent’s aggression.

Throughout this, business associates maintained a slither of a lead, and from there, built into a more unstoppable force. However, after a dramatic fight within their own base, which saw both of their tier four towers die, BA was able to push into their opponent’s base and take the come from behind win, taking us to game three.

Here business associates would fight with everything they had. After once again building a lead, BA would look to push down and end this game with a win. At around 20 minutes, a hyper farmed David “Moo” Hull grabbed an ultra kill, and it seemed like BA would take home the victory.

But instead, the match would end in heartbreaking fashion for the business associates. Almost out of nowhere, EG rallied, snuck into BA’s base, and with no tier four protection, took down the throne for the victory. A tragic end to the tournament for business associates.

The biggest takeaway from this group stage is how much the gap has closed between Evil Geniuses and their next closest rivals in NA. Just a few months ago, it really felt like there was only one team in the entire region who could reasonably compete at a top-level. Now, with the performances of Quincy Crew, there’s definitely some more contenders to that throne. What’s more, even with their losses, the score lines and tight games which both CR4Zy and business associates have forces show they’re not far off reaching the same competitive level.

The NA portion of the ESL One Los Angeles 2020 Online will conclude tomorrow with the semi-finals and grand final matchup. All the action is available to watch on ESL’s official Dota 2 channel.