Bruce: “I Definitely Have Some Secret Weapons” 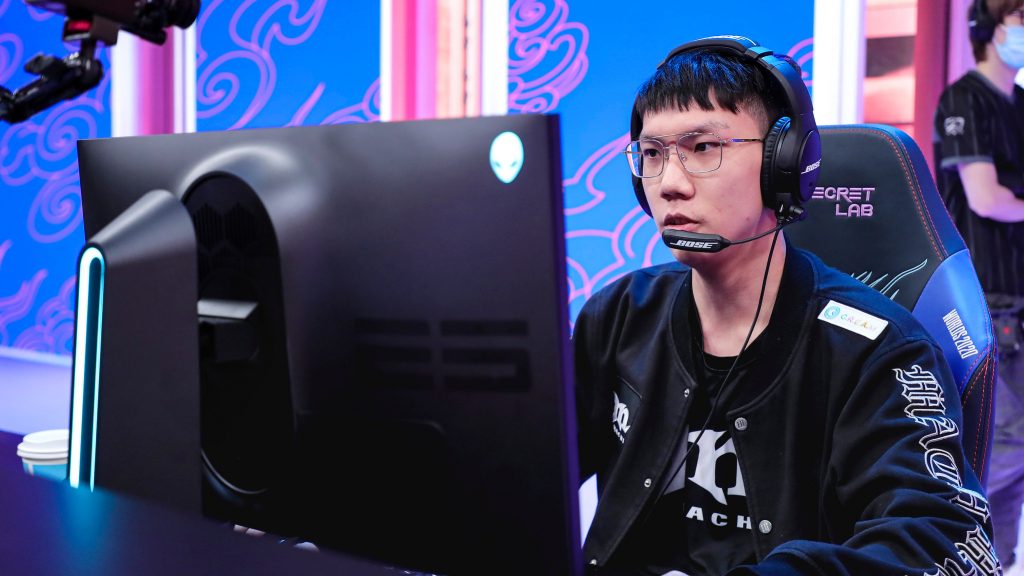 Machi Esports will have to overcome G2 or Suning to stay in the race for the Knockout Stage. (Photo courtesy Riot Games.)

The run of Machi Esports at the League of Legends World Championship so far has looked more promising than most would have expected. In their first match, the PCS champions wiped the floor with North America’s Team Liquid, showing that they’re not to be trifled with. Monday, they held up decently against G2 Esports and while Machi did end up losing the game, they made European fans quite nervous.

After the game against G2, Machi’s bot laner Chiu “Bruce” Chih-Chun was kind enough to join us for an interview to reflect on the game against G2, sharing how he prepared and what went wrong. Additionally, Bruce spoke about himself as a player. He told us how it feels to play at his first World Championship, how his teammates help him, and how comfortable he is with the current meta.

Hotspawn: Thank you for joining, Bruce. Unfortunately, you lost to G2 today and are now 1-2 in the Group Stage. What are your first thoughts on the game?

Bruce: For today, we didn’t manage to have the best conditions to play the game. Our opponents, G2 Esports, are a very strong team. So it was very hard to win this game. But after this match, we are going to make some adjustments and try to make some modifications. We have the confidence to get a victory in the next match-up.

Hotspawn: What do you mean by not having the best ‘conditions’ to play the game under?

Bruce: I mean our mechanics in the game and how the game went in general.

Hotspawn: Heading into the match against G2, how did you prepare? They’re considered to be the favorite for the groups, after all. Did you spot any strategies you could use against them?

Bruce: We did research about their macro play in the mid-game. We also studied their jungler’s pathing. G2 is quite famous for the fact that they prefer to push in the lane and find opportunities to find team fights in the mid-game.

Hotspawn: We saw Machi play very aggressively early on. Was this the counter-strategy something you had intended to use from the start against G2?

Bruce: Actually, for today’s game, we chose a few champions that would be very strong in the early phase, which is why we came off aggressively and tried to engage is so many skirmishes in the early game.

Hotspawn: I also want to learn a bit more about you because we don’t hear that much from the PCS region. How does it feel to play on the international stage against these top international teams?

Bruce: So, first of all, I really appreciate all my teammates. My teammates have just carried me here. Also, I’m very happy to see so many players that I really like to see play.

Hotspawn: How is it to play on this stage for you? Are you someone who gets nervous, or can you keep your cool easily?

Bruce: I am not that nervous on the stage, actually. I think this may be because there is no audience here in the studio. This means that we don’t have something like extra pressure.

Hotspawn: Are you somebody that feels a lot of pressure then?

Bruce: I definitely think that, if there was an audience, that I would feel extra pressure. But still, my emotions have mostly been ‘being excited’.

Hotspawn: You said earlier that your teammates ‘carried’ you. In what sense do they carry you?

Bruce: Well, my teammates are all veterans. They have a lot of experience with playing on stages like this, internationally. So they teach me a lot, actually. Our team was reformed for this year, and they helped me a lot with that too.

Hotspawn: Finally, I want to talk with you a bit about the meta. It’s something that’s continuously developing at Worlds. Are you comfortable with the current meta?

Bruce: I think in the current meta, some champions like Senna and Ashe, are champions I didn’t manage to play well. But there are some aggressive champions, more carry champions like Ezreal and Caitlyn. I think I prefer to play those champions.

Hotspawn: Do you think that, with your champion pool, you can surprise your opponents with picks that we don’t see very often?

Bruce: So there are champions like Twitch, who I played a lot of. But I think during the two games that we played, during the pick and ban phase, it was not a suitable choice for me. I definitely have some secret weapons. I can play Draven or Kai’Sa too. I played those champions a lot during scrims, actually. So maybe if I get the opportunity I will pick them.

Hotspawn: To round it up, is there anything you want to say to the people who have been supporting Machi Esports and will continue to do so?

Bruce: I really appreciate all the fans, and want to say thanks to the fans who always support our team Machi. Also, this time is our first time to play on the international stage of the World Championship. So although some people might not have very high expectations for us, we will definitely try our best to give a very good performance.

Machi Esports’ next match is against Suning, and will be played on October 6th at 11 a.m. CEST.