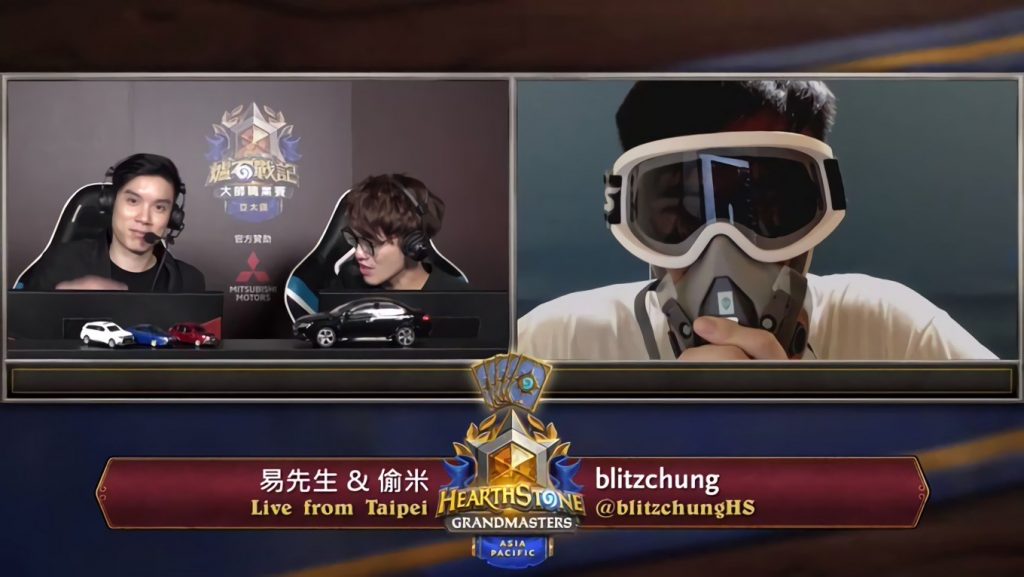 Blizzard Entertainment has announced that they have suspended Hearthstone player Blitzchung following his comments regarding Hong Kong.

Blizzard Entertainment has announced that they have suspended Hearthstone player Chung “Blitzchung” Ng Wai. Blitzchung is “ineligible to participate in Hearthstone esports for 12 months beginning from Oct. 5th, 2019 and extending to Oct. 5th, 2020” and will also not receive his winnings from his Hearthstone Grandmasters play.

During the Taiwanese Hearthstone broadcast, Blitzchung was interviewed following a victory. The Hong Kong-native wore a gas mask, similar to those being worn during the current protests in Hong Kong while saying “Liberate Hong Kong. Revolution of our age!” in Mandarin.

Not only was Blitzchung suspended but Blizzard has also announced that they will no longer work with the two casters who took place in the interview segment as well. According to the translations of several people online – specifically, ESLSucks on Reddit – the casters told Blitzchung “Ok, so if you just say the eight words we’ll stop here.”

“Engaging in any act that, in Blizzard’s sole discretion, brings you into public disrepute, offends a portion or group of the public, or otherwise damages Blizzard image will result in removal from Grandmasters and reduction of the player’s prize total to $0 USD, in addition to other remedies which may be provided for under the Handbook and Blizzard’s Website Terms.”

Demonstrations in Hong Kong started earlier this year when the Chinese government proposed an extradition bill that would allow criminal suspects to be detained and sent to mainland China. Many believe the bill would facilitate the disappearance of critics of the Chinese regime in Hong Kong.

The initial bill was pulled in September, however, the demonstrators have since made more demands. Specifically, the group is calling for an independent inquiry into police brutality and the resignation of Carrie Lam, Hong Kong’s chief executive.

The banning of Blitzchung also comes at a time when the situation in Hong Kong is receiving more notice in Western culture due to the tweet of Daryl Morey, the General Manager of the Houston Rockets. In a tweet that has since been deleted, Morey supported the efforts of the demonstrators in Hong Kong.

NBA Commissioner Adam Silver has since come out and supported Morey.

“The NBA will not put itself in a position of regulating what players, employees and team owners say or will not say,” Silver said in the statement. “We simply could not operate that way.” The fallout has already begun, with CCTV Sports, a division of China’s state broadcaster, removing NBA games from their programming. Tencent, the digital rights holders of the NBA in China, have also announced that they will blacklist Morey and the Houston Rockets, suspending all reports/streams of the team.

Hearthstone
Share
Justin Hartling
Justin has been writing professionally for his entire career with a background in journalism and broadcasting. After writing about what other people wanted for years, Justin came up with the idea for Hotspawn – allowing him to combine his love of writing and of esports.
Follow me