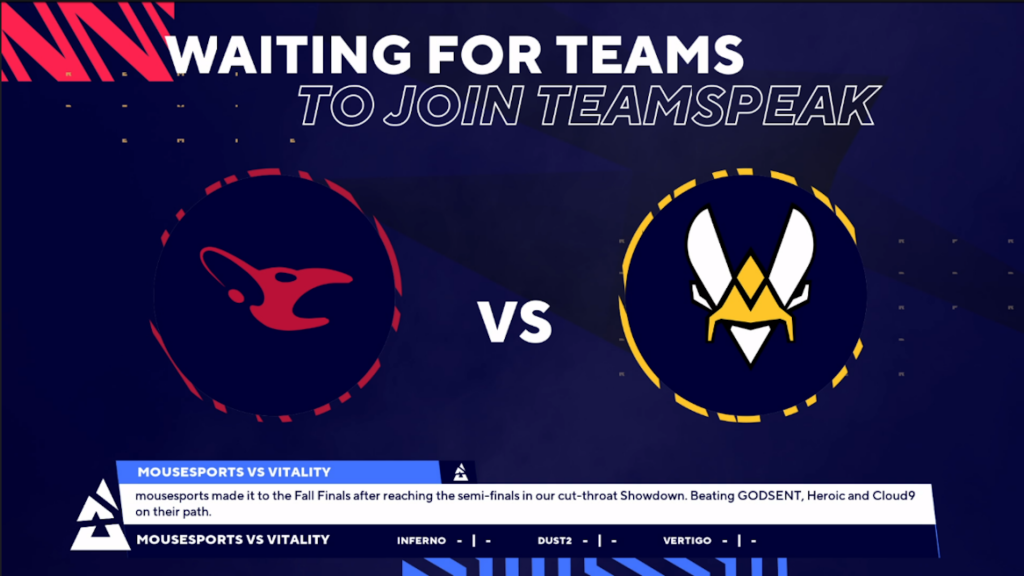 The BLAST Premier Fall Finals was delayed earlier today as CS:GO players have decided to protest current communication rules after a recent CSPPA revelation. The BLAST event organizers have been recording voice comms of various teams in-game, and players are no longer allowing BLAST to have access to their voice and game capture.

The BLAST Premier Fall Finals event was set to start on December 8th at 15:30 GMT. However, moments before the game was set to start, both mousesports and Team Vitality decided not to enter their team’s respective TeamSpeak server. As this occurred, the CSPPA, Counter-strike Professional Player Association, responsible for a fairer CS:GO space, released a statement detailing that both the players at the BLAST Finals and the CSPAA could not reach an agreement over the use of voice capture and game capture for the event.

Both the players and CSPPA are raising the issue as both parties deem there is a significant risk in the handling of current voice and screen capture. Teams feel that at any moment the BLAST can air key information, which would ruin a team’s gameplan and months of strategizing. The other issue is that the CSPPA reports that comms and personal information has been shared with analysts and others which has led to sensitive information being released to the community.

The players at the event are in unison on this issue, citing that “We players are disappointed in how BLAST have handled this situation. We have tried to engage with them, but they have not been willing to engage with us at all. They have left us no choice but to make a stand here. Hopefully, they hear our concerns this way.”

Some of the players have voiced their concerns over Twitter to explain why they are currently not participating in BLAST monitored TeamSpeak servers. Mousesport’s Chris “chrisJ” de Jong, who sits on the CSPPA’s board of players, has revealed that teams have tried negotiating for months and that the talks have failed.

Yes disqualify all teams. Who are you going to watch then?

On the flip side, Mohan “launders” Govindasamy believes that the quality of the BLAST’s production value is going to get worse. Over the last year, BLAST has implemented voice segments to bring to life behind the scenes of CS:GO. One of the show’s features was to reveal quality moments of in-game communication, which is an excellent insight for the spectator. Launders believes it has led to good moments, such as the Aleksi “Aleksib” Virolainen call.

Can’t wait for broadcasts to turn into the same shit 24/7 and we miss out on moments like Aleksib’s mid round calling and funny moments where we find out players have personalities.

I talked about this on HLTV confirmed, I’m dying on this hill.

The argument seems to be heading into the subject that it is “okay” to record voice comms for production highlights, but it needs to be well managed. Competitors such as Robin  “ropz” Kool believes that both ethical voice recording and production value can happen, which has been retweeted by his opposition Vitality’s Dan “Apex” Madesclaire. In addition, FunPlux Phoenix’s GM, Petar Markovic agrees on this stance.

I'm personally fine with recording the comms for the sakes of competitive integrity, although sharing the confidential information (strats/team talks) is a no-go for me.

This could be fixed with adding a simple NDA where TOs would agree not to share any confidential information. https://t.co/BcQy3W8XLB

I believe that is still possible with the right regulations, which this is all about

Finally ready to start the game! @BLASTPremier will start talks with @CSPPAgg about the use of voice comms and video. Sorry for the wait everyone at home and for those working there. 🙏