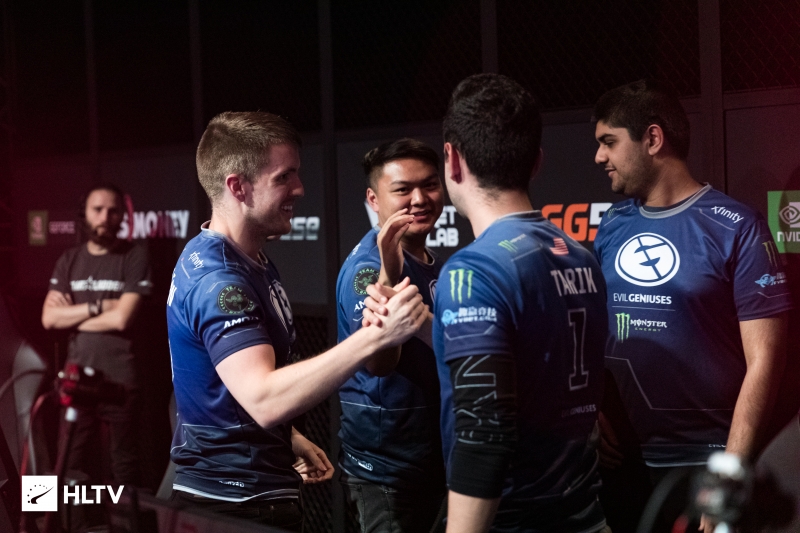 Evil Geniuses will be looking to start their year off hot. (Photo courtesy HLTV)

The third and final week of the BLAST Premier Spring Group Stage is upon us. There are only two guaranteed spots left at the Spring 2020 Finals and four teams battling for them. In addition, $100,000 of prize pool money is on the line. 100 Thieves, G2 Esports, Evil Geniuses, and OG will have to bring their best Counter-Strike for their biggest event of the year so far.

BLAST Premier Spring’s previous week saw Complexity shock the scene by advancing through the Group of Death. Natus Vincere also ran through the losers’ bracket after a first-round loss to take the first seed. Favorites Astralis and Team Vitality will still have a chance to advance at the Spring Showdown.

Two weeks of incredibly entertaining Counter-Strike is behind us.

Which team do you expect to stand in this position, when Group 3 is over?

100 Thieves will be playing their first matches of the year. The tenth ranked team in the world showed promise in their last two events, getting second at IEM Beijing and top eight at ESL Pro League Finals. While their recent performances have been good, 100 Thieves may have to warm into their games. The Thieves will have a tough road ahead of them to prove that they are a true competitor at BLAST.

G2 Esports are one of the more unpredictable teams to track. On one hand, they’re ranked within the top ten and have momentum from the IEM Katowice qualifiers. On the other, they haven’t had success at a major event in quite some time. Their roster on paper is good enough to compete with the best of the best. The problem is getting their strategy and teamwork in order. These upcoming matches will be a good indicator of G2’s trajectory.

Evil Geniuses come into the group as the highest ranked team at fifth. That said, they are not a surefire favorite. Talent wise, they have some of the most mechanically skilled players in the world. However, they’ve recently shown a tendency to not play up to their potential. At multiple events such as ESL Pro League Finals and IEM Beijing, EG have exited the competition much earlier than expected. When they play their best, Evil Geniuses have the ability to beat anyone. It’s just a question of if they will show up.

OG have the most recent match experience, having played at the ICE Challenge just over a week ago. Even with that, their underdog status in Group C is still very solidified. They have a roster of quality players, just not ones that have shown the ability to carry a team. They’ve also had cohesion issues in their first three events together that don’t look easily fixable. While they are expected to go 0-2 in the group, OG could turn up the heat enough to be competitive.

The first-round matchups take place on February 14th. Tune in to watch the exciting conclusion of the BLAST Premier Spring Group Stage.