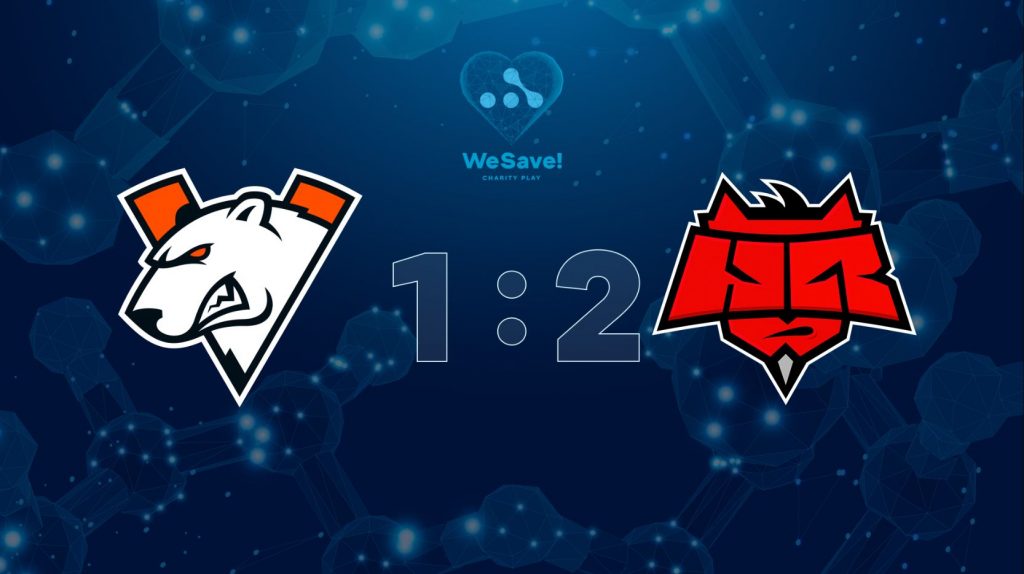 Virtus.pro and TNC Predator struggled against their opponent’s on the third day of WeSave! Charity Play. (Photo courtesy WePlay!)

Day three of WeSave! Charity Play featured three big matches, with three top teams taking on a trio of underdogs. Although you’d have expected another day of 2-0 victories, as was the case Saturday, Sunday provided some shocking twists and turns as the matches got underway.

The day’s games were introduced once more by the relaxing sound of a string quartet, followed by some oddly relaxing handwashing instructionals. Organizers WePlay! have made it their mission to make each day of this event so far a little bit different, keeping things fresh. It’s an extremely welcome touch, given that this may be some of the only competitive Dota 2 we get to see in some time.

People from all over the world are helping us to raise money to fight the coronavirus. And our talents also have their own motivations, thoughts, and stories

After some brief analysis and introductions, it was time for the WeSave! games, and Sunday started off strong with a dramatic Southeast Asian showdown.

Can’t Even Win With Ana?

TNC Predators are struggling. The team which dominated the first quarter of 2019-2020 Dota Pro Circuit season, winning back to back tournaments, has just never found its footing since the dramatic 7.23 update. Since that series of patches flipped the game on its head, adding neutral items and changing the way teams can close out games, TNC hasn’t won a single event, and failed to qualify for the ESL One Los Angeles Major or StarLadder ImbaTV Dota 2 Minor.

That said, the team was still the favorites headed into their WeSave! matchup with Team Adroit. With legendary OG carry Anathan “ana” Pham stepping up to fill in for an absent Gabbi.

We got your night jam-packed with action as the two-time TI champion Ana will stand-in for Gabbi, due to ISP issues, in our match versus Adroit tonight at 8 PM!

As the first match started off, there were signs we were finally seeing a return to form for TNC Predator. It wasn’t stand-in Ana that was the star of this show either, but mid-laner Armel Paul “Armel” Tabios. On his Void Spirit, he quickly took control of his lane against Adroit’s Ember Spirit, transitioning his lane into roaming opportunities. With this super-strong Spirit brother traveling lane to lane grabbing kills, it was only a matter of time before Adroit fell, and in short order, TNC’s opponents tapped out.

However, this initial victory proved to be immediately hollow. For the next game, Adroit put mid-laner Mc Nicholson “Mac” Villanueva on his comfort pick Kunkka, and suddenly the Void Spirit that had proved so potent last game was useless.

Meanwhile, in the top lane, Ana’s lack of synergy with his temporary TNC teammates seemed to show. His Spectre had no time to farm, and around 14 minutes in, he started to gift several deaths to his opponents, swinging the gold lead massively in his opponent’s favor. TNC would never recover from this deficit, and despite holding on for as long as they could, repeatedly died to a vicious combination of Oracle and Phantom Lancer.

With match point on the line, and TNC thoroughly humbled, Adroit went in for the kill. But the Predators weren’t about to just roll over and become the prey. Taking away the Phantom Lancer and giving it to Ana, TNC looked to punish Adroit for their sometimes passive early games. As the game started, nothing went TNC’s way. The Chen was killed on cooldown, the Lancer couldn’t farm, all the while Adroit’s carries scaling. But after a pair of crucial fights, Adroit lost control, and TNC’s lead spiraled into the thousands.

However, this was not going to be an easy win. Pushed onto their high ground, Adroit dug in. Their Troll Warlord cleared waves, and farmed up a storm, eventually to a point where he simply couldn’t die. And after two huge team fights at 50 and 60 minutes, TNC gave up the ghost, tragically losing this incredible game. TNC has been completely shown up by a team that now looks like one of the strongest in Southeast Asia

In yet another favorite versus obvious WeSave! underdog matchup, Virtus.pro took on HellRaisers in a CIS showdown. Virtus.pro has fixed many of their early-season problems by acquiring as many top talents in their region as possible. However, they suffer from synergy issues, and nowhere was this more evident than in this series.

The team started strong. In game one, cast by Owen “ODPixel” Davies and Gustav “s4” Magnusson, we saw three-position Roman “Resolut1on” Fominok pop off on Furion. In what was the perfect counter to HellRaiser’s Lycan. Unable to push, because of the sheer number of creeps spawned by his opponent, the Lycan was trapped. With VP’s mid and top also both securing impressive leads, the team could shut down their opponents and secure the first game comfortably.

Things would not go so smoothly for the rest of the games. Mainly because of the incredible play of Gleb “Funn1k” Lipatnikov. While VP’s three-position Resolut1on had been the carry for his team in games one and two, it was Funn1ks turn to be the 3-pos carry this time.

Our guys have been analyzing their previous games since early morning. Whatever it takes to improve!
What’ve you been up to today? pic.twitter.com/YHODSsWWp0

In-game two, he crushed on his Pangolier, dominating in lane before rolling around the map and easily snowballing the rest of his lanes. He followed this performance up in game two, with the Weaver. While not the most typical of hard-carry champs, again, the CIS veteran bullied his lane and secured his team a thrilling 2-1 victory over clear favorites Virtus.pro. HellRaisers continue in the WeSave! tournament, while Virtus.pro is left looking for answers.

With the two favorites in the past two WeSave! games losing to tier-two opponents, Evil Geniuses had good reason to be nervous headed into this game with business associates. The former J.Storm roster is definitely one of the better teams in NA, and was expected to put up a better showing than either of the opponent’s Virtus.pro and TNC Predator had faced.

However, business associates had a handicap. Their mid-laner Leon “Nine” Kirilin was playing from Germany with over 100 ping. As a result, it looked like EG would quickly sweep this series, even with two of their own standings. Coach Kanishka ‘Sam’ “BuLba” Sosale and NA veteran Eric “Ryoya” Dong stepped up to take the place of EG’s European players, and although they would lack synergy, they would definitely have better ping.

Instead of an easy win, though, what we saw was just an incredibly lazy looking game from Evil Geniuses. The standing meme is that EG throws games, but in this match, EG didn’t even get the chance to build a lead to throw. Nine, on 100+ ping with Lycan, was just allowed farm for free. As a result, we got the shortest game in the tournament so far, 19 minutes and 50 seconds, as Lycan pushed towers all the way to the throne with little opposition.

After a slow start to the series, we answer Business Associates with a victory of our own to tie it up 1-1.

Game 3 of our #WePlayDota 2 Charity Play match is up next. Winner advances to the NA finals! #LIVEEVIL

For the next game, EG wisely banned the Lycan but allowed Business Associates to have an incredibly strong draft, with multiple playmaking heroes. But much better early start for EG spelled disaster for their opponents. By giving Ryoma a more comfortable pick in Kunka, he was able to prevent Nine from doing anything. Business associates found themselves with too many heroes to sustain with the little farm they were getting, and not to be outdone, lost this game 49 seconds quicker than EG had done last match.

Before game three, it was time for a quick break with some more health advice, coronavirus info, and video calls from critters. The light-hearted breaks in the action have definitely helped maximum the charm on day three of this event.

For the deciding game EG picked up Ursa, and banned almost all the heroes that could counter him by spawning additional creeps. However, business associates did manage to grab the Ancient Druid, trying to hinder this super late game carry. However, the Druid was constantly disarmed by the EG’s oracle although this was no 19-minute stomp like the previous two games, with BA finding plenty of kills.

But ultimately the kills were too little, too late. Since Nine’s Templar Assassin hadn’t got the early gold it needed to scale, there was really no answer for business associates. EG managed to prevent the throw, and secure a win in the final game, and with it the series. They become the only top team today not to lose their matchup.

Sunday’s WeSave! Charity Play games saw three top teams being shown up. Each of the favorites to win each matchup faltered at least once in each series. TNC fell to Adroit, HellRaisers took two games off Virtus.pro, and EG didn’t even put up a fight in their first game against business associates.

Thank you so much for staying with us!

WePlay! also revealed Sunday that if the event reaches $160,000 total donation amount, they’ll have a 3-on-3 All-Star Match. With that to look forward to, and the final day of semi-finals, tune into the WeSave! Charity Play event on Twitch, Monday, March 23rd.