Beyond the Summit Warms Up Winter Dota with Pro Series 4 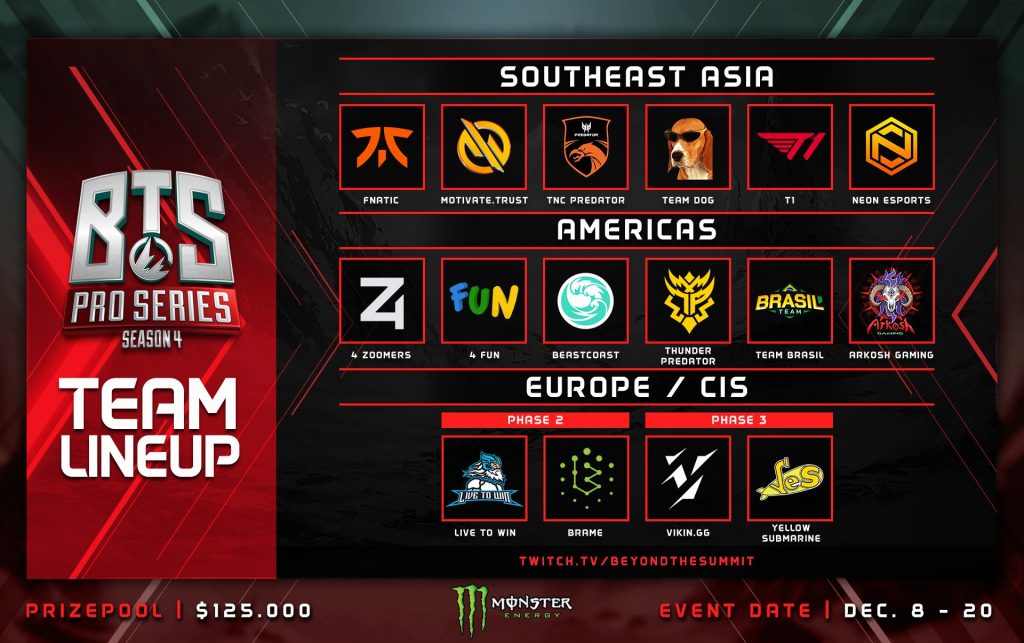 If you were thinking the holiday season was going to be quiet for Dota, then the announcement of the BTS Pro Series Season 4 has shattered those expectations. Revealed on December 1st across Beyond The Summit’s official social media, the BTS Pro Series 4 looks to bring competitive Dota 2 action to three international regions.

Get ready… because #BTSProSeries 4 is COMING SOON! 🤩

Across the Americas, Southeast Asia, and Europe/CIS, 24 teams are set to battle it out for a share of the $125,000 prize pool. From December 8th until the 20th, these teams will battle in three separate divisions for their chunk of the prize money.

You can find all the info regarding #BTSProSeries 4 format below! pic.twitter.com/FXysB8Ah1b

Not all the teams have currently been announced, but from those that have, it looks like a stacked event. The Southeast Asian division is filled with top names. Fnatic, TNC predator, T1 and Neon Esports are joined by previous BTS Pro Series winners Motivate.Trust. They’ll be competing for $50,000 in prizes.

In the Americas, 4 Zoomers, 4 Fun, beastcoast, Thunder Predator, Team Brazil, and the infamous Arkosh Gaming are set to compete for the $40,000 pool. Many of these teams have recently impressed as part of Realms Collide 2, a Valve-backed, South American-based tournament. Besides the notable names from both North and South America, this event will be the first tournament Arkosh Gaming, the NA organization revealed recently by Jake “SirActionSlacks” Tanner will compete in.

Over the pond in Europe and CIS four of the most exciting up-and-coming teams from those regions are set to face off for a chunk of the $35,000 pool. These include Live To Win, Brame, Vikin.gg, and Yellow Submarine. Each one of these teams has gained notoriety in recent months for their impressive competitive records. Live To Win, and Yellow Submarine topped the group stage of EPIC League Division 2, with both just dropping a single series. Yellow Submarine also previously made headlines because of their dramatic upset win over Team Nigma at ESL One Germany.

Vikin.gg rocked the Dota 2 world with a victory at last BTS Pro Series, and then an upset of Team Liquid at DOTA Summit 13. The team have been widely praised as an inspirational story about the benefits of sticking together as a roster. Last, but by no means least, are a Swiss-backed stack of players who’ve been making a stir in tier three events such as the ESL Meisterschaft 2020 Season 2. But it’s their performance at DOTA Summit 13 that really turned heads. The squad played far better than most expected, defeating 5men and heading to the playoffs, before only narrowly finding themselves eliminated by Team Liquid.

Despite having to battle for the time slot with the playoffs of the EPIC League (which also runs from December 8th to December 13th), the BTS Pro Series is definitely worth a watch for the caliber of the teams competing. You can catch all the action from this event on Beyond the Summit’s official Twitch channel.