BETWAY Midas Mode 2.0 Day One: The Show Will Go On 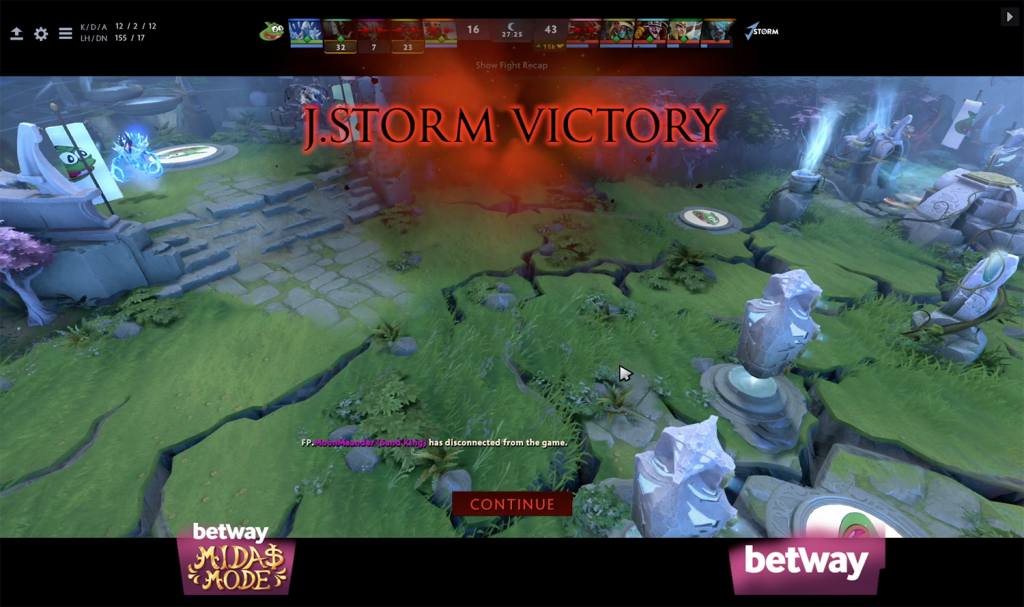 We're only one day into BETWAY Midas Mode 2.0, and J.Storm looks like the dominant team in NA.

We’re only one day into BETWAY Midas Mode 2.0, and already the North American standings are starting to shape up. But before we get to North America, which were the last two series of the day, we should discuss the morning.

Midas Mode opened with a quick ceremony. Sir Sadim, as played by Lawrence “Malystryx” Phillips kicked things off, calling for “flute boy.” This initiated a parade of talent armed with ribbons and a man with a recorder, who then played the Dota theme (accompanied by Jake “SirActionSlacks” Kanner and Shannon “SUNSfan” Scotten) while the teams competing at the event were introduced by Gareth Bateson and Kyle Freedman.

After this, we were treated to Gabe Newell himself welcoming us to Midas Mode.

The other reveal in the morning was delivered by Hotspawn’s own Gillian Linscott. She had the pleasure of interviewing beastcoast streamer Alex “Sheepsticked” Roberts, who is on-site as an on-call stand-in for any teams who need a spare player.

The games of the day were fairly one-sided across the day.

The International 2013-winning Alliance, minus Gustav “s4” Magnusson, looked hot in the first two series of the day. Rasmus “Chessie” Blomdin stood-in for the squad (despite Sheepsticked being on-site). Ironically, he played Meepo in the first game of the day, a hero for whom Sheepsticked’s affinity and prowess is fairly well-known.

Game one featured a slight bug on hero bounties, meaning we saw many kills through the early game worth less than 50 gold apiece. Alliance kept the pressure on, achieving mega creeps by 38 minutes, and then the full game within 42. One of the highlights of the first game was the VIP-ticket-holding attendee who controlled Roshan.

Game two saw gold bounties back to normal. Alliance weren’t going to slow down though. They took the game in 38 minutes, giving us our first look at the ESL-themed Kunkka in the process.

Day 1 not even over and we already have match highlights!!!

Check out the best moments from our opener, @theAllianceGG vs Sir Sadim's Stunners!!!!

After the first series, Moonduck made the call to swap from their custom map to the traditional one for the rest of the day. Why? Observer issues created by some kind of bug in the custom mode. The hope is that the custom map will return tomorrow with the observer problems resolved.

While the initial Midas Mode saw teams messing about, so far, the teams are out for blood in 2.0. J.Storm, debuting their new roster, looked fantastic in the first of their series. By contrast, beastcoast didn’t have a strong outing. That said, beastcoast is fielding a roster purely for the purposes of Midas Mode. Braxton “Brax” Paulson, Enzo “Timado” Gianoli, Jaron “monkeys-forever” Clinton, Andrew “Jubei” Evelynn and Michael “ixmike88” Ghannam are temporarily donning the beastcoast logo just for this event.

J.Storm not only won both games versus beastcoast, but they also completed four bounties. This gave them a solid chunk of moonbucks to work with, and also made them the first team to really acknowledge the importance of bounties for managing your team’s cash.

This series started out with more of the same. J.Storm’s Pangolier looked especially good through the beastcoast series and game one versus the Pepegas.

Game two was much closer. J.Storm’s Alchemist got a solid head start early on. The team took advantage of an early skirmish in the top lane to pick up another bounty, Technical Difficulties, which required a hero to declare the bounty and survive standing still for 30 seconds in enemy vision.

The struggle for Pepegas in game two was having enough damage to win teamfights early in the game, and there was some hit-or-miss usage of their Faceless Void ultimate, Chronosphere. There was a great Roshan play, where Chrono allowed the Pepegas to steal Roshan. When J.Storm didn’t push their advantage far enough, Pepegas had enough room to turn the game around. Taking out heroes without buybacks, they went in for the Ancient, and sent us to our first game three of the tournament.

J.Storm was not to be denied. Though Pepegas spent an impressive 880 moonbucks on their draft, they couldn’t convert that investment into success on the map. The action started early on, and J.Storm kept the pressure on. David “Moo” Hull’s Spirit Breaker was relentless across the map, and unlike in game two, J.Storm didn’t leave the door open for Pepegas to make a comeback.

This puts J.Storm in a great position for the tournament, with two series won and only one more, versus Team Anvorgesa, remains.