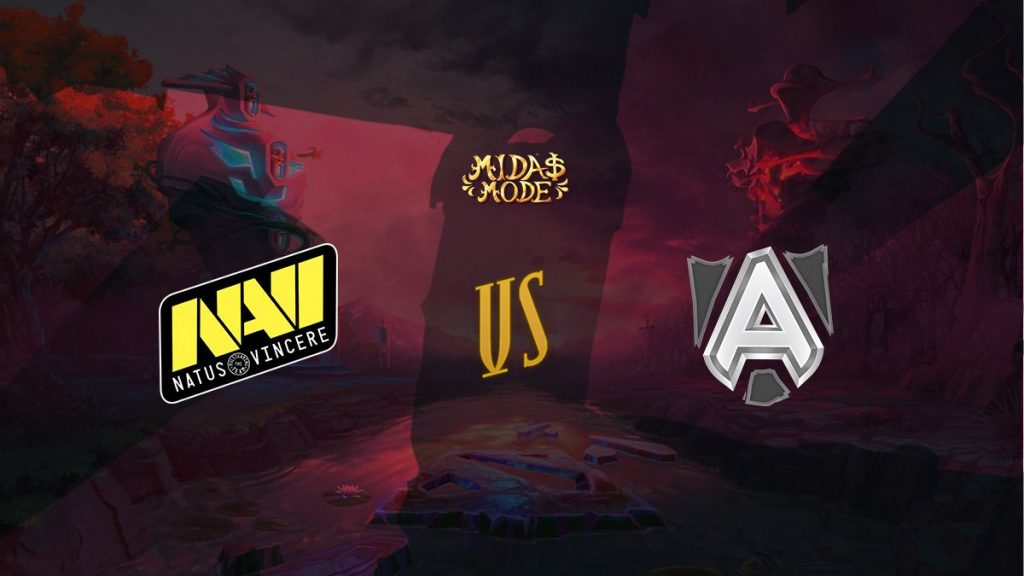 Alliance were victorious over rivals Natus Vincere. (Image via Moonduck)

Day four of BETWAY Midas Mode 2.0 kicked off with a legendary rematch from The International 2013 (sort of), as the classic The International 2011-winning Natus Vincere roster took on TI3-winning Alliance. Danil “Dendi” Ishutin, Clement “Puppey” Ivanov and the rest of the TI1-winning Na’Vi lineup were the last real obstacle in the way of an Alliance team that’s looked unstoppable this tournament.

We did it against the TI3 roster, can we do it against TI1 @natusvincere? LET'S. FIND. OUT!🔥🔥

What’s more, the match-up was influenced by a host of new bounties. Some were geared towards sending people into Roshan, creating more team fights and one was entirely based around recreating the TI3 finals. And even more chaotically, the new “Evil Creep” modifier was eligible to be bought by both teams, giving them the potential to unleash up to eight dastardly allied minions on their opponents.

As the drafts started, we immediately saw the economic difference between the two teams. Alliance’s performances had netted them a cool 2007 Moonbucks, with the squad having more than doubled their starting money. Meanwhile, Na’Vi was barely breaking even, bringing 950 Moonbucks to the draft. And this resulted in them picking a more cost-effective team comp.

Even with this penny-pinching, Na’Vi was able to select the fifth pick Broodmother, leaving Alliance with no counters. And as the game started, Na’Vi looked to capitalize on their advantage, by immediately attempting and succeeding the “It’s Soon Right?” Bounty. As the match began, the Alliance stack found it had no favorable lanes, being bullied out by the Venomancer and Treant Protector combo. To further this advantage, Na’Vi even rotated into a tri lane, to punish how weak Alliance looked. Finally, Alliance attempted to shoot back as Night Stalker reached his power spike, only for Henrik “AdmiralBulldog” Ahnberg to overextend and die

The main problem was that Alliance just weren’t able to stop Dendi farming on his Broodmother. So with nothing else to do, the TI3 stack attempted to slow down the game. Finally, they were able to spring a trap, evening out the gold score, but it wasn’t enough. Even the Evil Creeps, which Alliance had purchased to hinder Na’Vi, weren’t able to slow them down.

Suddenly though, the momentum swung. After Na’Vi took Roshan, they found themselves unable to push in against the Rapier-enhanced Medusa, and Alliance pushed back. After a brief fight on their high ground, Na’Vi tapped out, and TI3 Alliance took the win.

For game two, Na’Vi found themselves with a much smaller amount of Moonbucks to play with, but still picked up the Ancient Apparition (with his delicious-looking ice cream skin) and Tusk. But as they started to feel the pinch, the team resorted to Underlord and Bounty Hunter, both low-cost heroes. Meanwhile, riding high with their significant net worth, the TI3 Alliance stack picked up Ogre Magi (with Green Swamp Man skin) and Slark, two heroes that had seen success and risen in price over the tournament.

The talent reaction to AA ice cream being picked! 😆🍦 pic.twitter.com/YWQLF3RwOQ

The game kicked off, Henrik “AdmiralBulldog” Ahnberg  getting caught out by Ivan “Artstyle” Antonov and Puppey, immediately grabbing a lead for Na’Vi. As the game progressed, top lane became the focus of the game. Both teams attempted to secure an edge and shut each other down, with both mids and supports roaming to the top to try and gain an advantage. And after ten minutes, Alliance had a clear advantage.

But as the teams started to roam around the map, Dendi, on Mars, began to create problems for Alliance. The TI3 stack couldn’t win team fights and found themselves caught out again and again. However, at the 16-minute mark, Alliance revealed they’d once again purchased Evil Creeps to mess with Na’Vi. This time the creeps were able to reveal the Na’Vi players wherever they went and gave Alliance a notable vision advantage. With the gold lead, and item advantage, and now creep help, Alliance was able to push in and defeat Na’Vi, with the TI1 winners throwing in the towel at the 26-minute mark.

TI3 Alliance with @AdmiralBulldog & @FollowAkke on their signature heroes win their series vs Old Na'Vi 2-0! pic.twitter.com/boCWpsN0hQ

This highly anticipated series ended with the same result as the historic El Classico final from TI3, albeit with a slightly quicker pace to it. These two veteran stacks both looked strong, but ultimately it’s the Alliance squad who’ve come out on top in all of their matches, and are headed to the playoff finals. Na’Vi will have to face Sir Sadim’s Stunners in the lower bracket, ideally looking to defeat the mercenary streamer stand-ins and get yet another rematch against their rivals on Alliance.