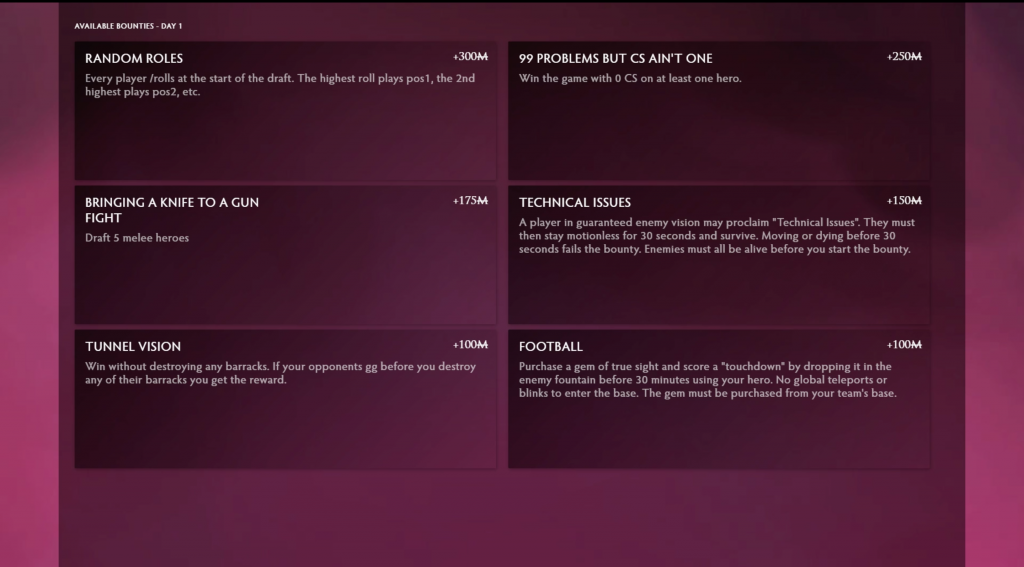 Hotspawn has the complete list each day of Midas Mode bounties, with ongoing updates.

One of the best parts of the actual game mode for BETWAY Midas Mode 2.0 is the bounty system. It’s a unique way to have fans around the world contribute ideas for the event. We will keep a running list of Midas Mode bounties and who has claimed them in this space, so return each day to find out what antics your favorite teams are up to.

All the bounties, by day:

Midas Mode operates using an out-of-game economy centered on Moonbucks. Teams use their Moonbucks to pick heroes, ban heroes, purchase buffs for the game and so on. To earn more Moonbucks, they have to complete bounties.

Midas Mode bounties could be anything. They might dictate a specific hero line-up or have a team perform specific and unusual action within the game. The only limit is which suggestions from the community delight Moonduck Studios the most.

RANDOM ROLES:
Every player /rolls at the start of the draft. The highest roll plays pos1, the 2nd highest plays pos2, etc.. (300 Moonbucks)

TECHNICAL ISSUES:
A player in guaranteed enemy vision may proclaim “Technical Issues”. They must then stay motionless for 30 seconds and survive. Moving or dying before 30 seconds fails the bounty. Enemies must all be alive before you start the bounty. (150 Moonbucks)

*This was completed in the second game of the third series of the day. J.Storm versus Fighting Pepegas. J.Storm completed it. This happened early in the game. J.Storm took an engagement top, and while the two teams were busy fighting it out there, their mid Tiny declared technical issues and stood still for the required 30 seconds.

FOOTBALL:
Purchase a gem of true sight and score a “touchdown” by dropping it in the enemy fountain before 30 minutes using your hero. No global teleports or blinks to enter the base. The gem must be purchased from your team’s base. (100 Moonbucks)

A MANGO A DAY KEEPS THE DOCTOR AWAY:
Have 5 active mangos in one hero’s inventory at all times until the first tier 1 tower falls in any side of the map. (100 Moonbucks)

TUNNEL VISION:
Win without destroying any barracks. If your opponents gg before you destroy any of their barracks you get the reward. (100 Moonbucks)

TEAMBUILDING EXERCISE:
When a member of your team dies, they must all chat an apology to their own team for something they did IRL. Each person on the team must do this once during the game to collect the bounty. (75 Moonbucks)

*This was completed in the first game of the second series of the day. J.Storm versus beastcoast. J.Storm completed it. There were some real gems in the apologies, including an apology from Roman “Resolut1on” Fominok for winning at ping pong, and from Joel Mori “MoOz” Ozambela for stealing Clinton “Fear” Loomis’ keyboard.

GAME THEORY:
Teams agree to deny their bounty runes at game start. If both teams deny all 4 runes, they get moonbucks. If not, well, they get the in-game gold (except for the deniers lul). (75 Moonbucks)

IT’S HALLOWEEN:
A person with invisibility can type something spooky in chat. The bounty is won if they manage to kill an enemy hero in 5 seconds after saying “boo.” (5 Moonbucks)

Return each day for all the new bounties and updates as teams complete them through the tournament!