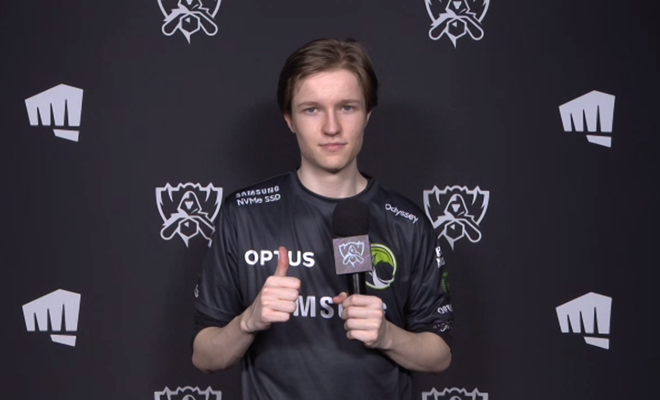 Babip, who debuted with Legacy in 2016 as a rookie, has been a key player in the team’s success during Play-ins. (Photo courtesy Riot Games)

Legacy Esports kicked off their first set of games in the Play-in Group Stage with a volatile 1-1 record. We got a glimpse of how good they can be as a team, but also how unstable they can be. Now, they’ve locked into the top of their group behind Team Liquid and are well-positioned to make it to the main event.

After a long day of games ending in a loss to TL in the first place tiebreaker, we sat down with Leo “Babip” Romer as he reflected on Legacy’s surprising run through Play-ins and his thoughts on representing the Oceanic Pro League.

Hotspawn: Unfortunately you lost the tiebreaker for first against Team Liquid, but in your player cams after the game the team seemed to be in good spirits. Can you break down what was going through your heads after the game?

Babip: To be honest, because it was such a stomp, we got stomped twice by them, there’s not really any other emotion you can have. It’s just funny.

Hotspawn: It’s funny you say that because I spoke with James “Tally” Shute the other day and he was saying your first loss against them was just a wash and it was easy to figure out what went wrong. Did you have the mindset of “these guys might be the strongest team in the group, we might win, we might lose,”?

Babip: I mean, after versing every team, we definitely realized that they were the strongest opponent. It being best-of-one, we knew that we could win, but obviously both games we made different mistakes, but they were both extremely crucial. Team Liquid is sort of a team that won’t give you opportunities to get back into the game, and if you try to get back into the game they make it look like you’re just inting. So once they get a small lead, and I feel like we got outdrafted twice as well, it’s just super hard to come back against a team like TL.

Hotspawn: TL aside, you guys were heavily underrated coming into Play-ins and a lot people have you at the bottom of the standings. You guys showed up big, and that least game easily could’ve gone either way. How does it feel smashing those expectations?

Babip: Obviously as the underdog, you don’t really have any expectations. Obviously we exceeded expectations. When we were building this roster, we didn’t really have “we’re gonna do super well at Worlds” in mind, to be honest. But yeah, it feels pretty amazing to just play super well on stage. Honestly I feel like the games that we won, obviously they weren’t perfect, but it felt like we were super together as a team and everyone was doing their part. That just felt good, to be a team that isn’t bad.

I would love to get picked up [in NA or EU], but going to Worlds every year is just as awesome

Hotspawn: It’s interesting you say that, because I think the general consensus among the OPL players I’ve spoken with is that they’re more focused on playing their best game than worrying about carrying the weight of the OPL’s hopes and dreams. But I have to ask you, how does it feel to be an OPL team that’s really shown its strength? You guys are constantly underrated and face a lot of obstacles.

Babip: Honestly, when I came to Worlds now, the expectation is that we might not be the worst team, but we’ll probably be close to the worst team. Just taking into consideration infrastructure, how much money gets put into leagues, I feel like obviously we completely exceeded expectations in comparisons to other regions. I think we’re definitely good. Obviously it’s best-of-one format, best-of-five it will be showing teams’ new skills, so hopefully we can bring the same momentum to b05’s.

Hotspawn: Going from there, I was actually speaking with Mitchell “Destiny” Shaw after he joined Origen and he actually shouted you out as a player that deserves to be playing in EU or NA. What do you feel about your own level of play? I know for a lot of you players your goal is to achieve success and be recognized and maybe move on to another region or something.

Babip: Last year, when everyone got picked up except me or Kim “Topoon” Ji-hoon, it definitely felt like “oh, maybe you weren’t as good as your teammates,” so it did kinda give me a lot of motivation as my goal to come to Worlds and do really well, so I’m really proud of myself and my team for doing well so far. Also, in saying that, I didn’t really let it destroy me or impact me too much. Because, at the end of the day I kind of thought about it. It’s like “okay, I am from OCE, I would love to get picked up, but going to Worlds every year is just as awesome. So I dunno, it still feels really good to win OCE back to back, come to Worlds, and do really well. Honestly that, to me, would be better than playing in NA Academy or something like that. Obviously, I still wanna get picked up, but I’m not too disappointed.

Hotspawn: Right now, who do you think is the strongest jungler in Play-ins?

Babip: Seeing as we’ve only played every team once and TL twice. It’s honestly hard to gauge. I feel like Mads “Broxah” Brock-Pedersen. I would have to say him because TL as a team and Broxah don’t make small mistakes that allow you to gain small leads which you can run with. It’s really unlikely that they’ll make a mistake like that game that we fought in bot river and they had just TP’d and we would’ve won the fight, but they’re just more prepared. I just feel like their drafts, and their gameplay, and their preparation, it’s all very procedural and it’s very hard to break down their procedures and how they play the game and their macro and obviously they’re all super good laners. It’s just hard to break the shell that they have.They have a very strong armor and it’s hard to break that. But other teams, the game’s a bit more messy, it’s all about how you play fights and the micro.

Hotspawn: If you could give a shoutout to one of your teammates, which one would you say you’re most proud of? Maybe it’s a play or just their overall play throughout Play-ins.

Legacy Esports’ next match will be on September 30 at approx. 11 p.m. PDT against the winner of Elimination Round Group B.