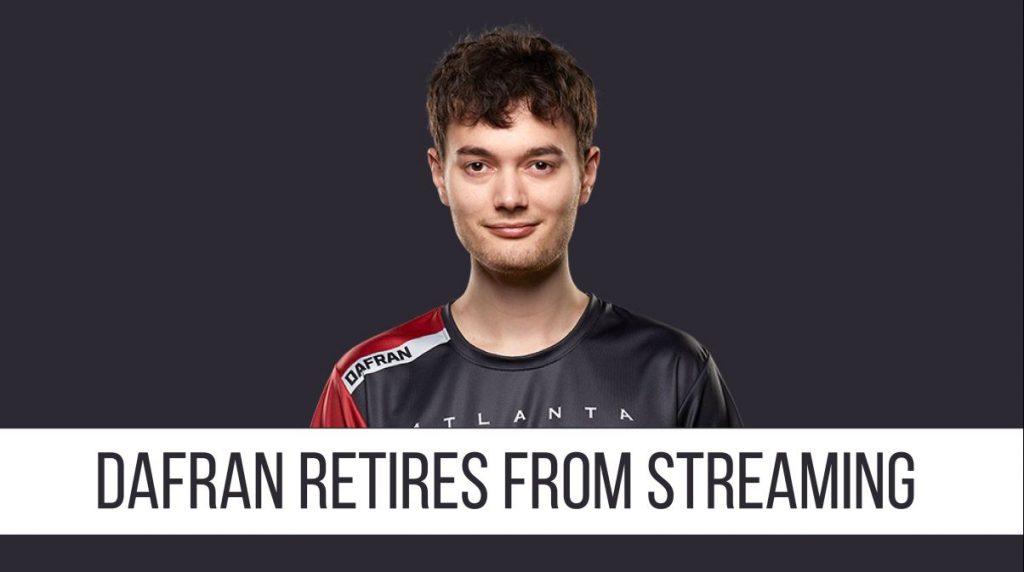 Dafran leaves behind a complicated legacy in esports and streaming. (Photo courtesy Blizzard)

Daniel “dafran” Francesca, streamer for the Atlanta Reign and former professional Overwatch player, announced his retirement from streaming and esports on Wednesday. The Danish player posted a twitlonger entitled “The new chapter!” in which he revealed he will be leaving the esports community to pursue education.

Dafran explained: “It is time for a new chapter in my life. I am going to be starting on an education that has to do with growing fruits, vegetables, etc.”

He offered two reasons why he is leaving. Firstly, he stated “we only have one life to live, do what makes you happy” and secondly that he, “has already spent 1/3 of [his] life in front of the computer.”

Dafran had a tumultuous career in professional gaming, to say the least. He started his esports journey back in 2016, playing for the Danish World Cup team. In 2017, he joined the North American organization Selfless Gaming where he played for a short stint. While playing for Selfless, Dafran was suspended for a month for throwing matches at Blizzard sanctioned events. After this experience, Dafran posted a Twitlonger in which he claimed he threw matches in order to get banned.

“Let’s get straight to it.” Dafran stated in response to his 2017 suspension. “I did what I did to get out of professional Overwatch, it was the only way. I was not sure if I would get banned or not but I would accept it openly and very happily if it happened. I have wanted to get out for a long time, competing and scrimming made me very depressed and bored. The only thing that kept me going was streaming and enjoying the fame.”

After leaving Selfless, Dafran was picked up by NRG Esports as a streamer before eventually landing with the Atlanta Reign, where he played in the Overwatch League from the end of 2018 until March of 2019. In March of 2019, Dafran retired from OWL competition and transitioned over the streaming for the Reign.

Most recently, Dafran made headlines by earning himself the first ever lifetime ban from Solary VALORANT tournaments, after he threw a profanity laced hissy fit on stream targeting the Solary tournament organizers. The conflict started because Defran’s team missed their semi-final match of the Solary Cup after the tournament organizers changed the start time. His behavior also earned him a seven day Twitch ban.

After the ban was announced, Defran continued his immature tirade online, doubling down on his insults and childish behavior. Defran’s continued aggression and unsportsmanlike conduct has dealt serious damage to his reputation over the past month. His highly unprofessional comments and declining reputation in esports may have been part of his decision to retire from streaming.

Dafran leaves behind a complicated legacy in gaming and streaming. Although many only know him for his angry antics, others are loyal fans who will miss his explosive personality. Regardless of what you think about Dafran, he definitely left an impression.