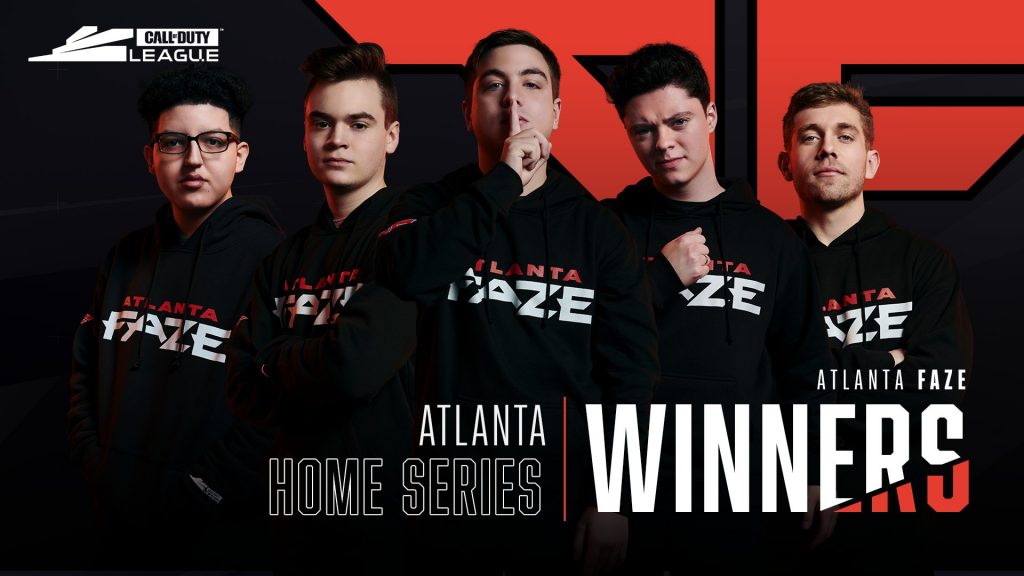 The second Home Series of the Call of Duty League (CDL) was expected to be dominated by Atlanta Faze and Chicago Huntsmen. FaZe were able to secure the tournament championship in front of their home crowd but had to make it through very tough competition. Huntsmen received their first loss of the season at the hands of Florida Mutineers in a shocking defeat. The Atlanta Home Series consisted of some of the most intense matches fans have seen so far and showed every team still have a shot at the title.

Atlanta were the predicted powerhouse of Group A and did not disappoint. FaZe swept Optic Gaming LA in a mostly one-sided series. Optic Gaming hit a late stride in Domination on St. Petrograd but could not force a fourth map.

London Royal Ravens beat Florida Mutineers in a quick 3-1 series that seemed to indicate the team would maintain their impressive performance from their Home Series two weeks ago. Wuskin and Skrapz continued to be a strong asset to the team and helped secure every rotation on Hardpoint St. Petrograd. Mutineers were able to achieve a Domination St. Petrograd win third map, but it was a tough win. The score was within 20 points and each team constantly third capped or neutralized flags to maintain the score. London secured their win with a Hardpoint Azhir and looked great in their first appearance of the weekend. The performance would not be a preview of things to come, unfortunately.

Atlanta FaZe and London Royal Ravens went head to head in the semifinal’s qualifier match. FaZe came out strong with a 250-195 Hardpoint win on Hackney Yard and maintained the momentum through the second map. London was able to secure a hard-fought Domination win on St. Petrograd and force the series to game four. FaZe sealed the deal however with a 250-189 Hardpoint win on Gun Runner. McArthur “Cellium” Jovel helped secure the Atlanta victory with a 40-kill performance.

Florida Mutineers were not down for the count and knocked out Optic Gaming with a dominant 3-1 victory. They were able to redeem themselves with a 3-2 victory in their rematch with London Royal Ravens.

Florida and London took turns dominating each other in the first two maps. The Mutineers were able to hold almost every hill on Hardpoint St. Petrograd and London only gave up one round on Search and Destroy Arklov Peak. The third map was a hard-fought domination match in which Florida was able to win with a five-point lead. Prestinni continued to be a star performer for the team and helped secure the series win with a 13-kill streak.

Chicago Hunstmen have dominated the league so far and continued their reign in the Group B bracket. They beat Toronto Ultra in a hard fought 3-2 series win. The series went all the way to map five which was Gun Runner Search and Destroy. Both teams traded rounds which led to a round 11 face off. Pierce “Gunless” Hillman was able to secure the final kill for Huntsmen and secure the series victory.

Chicago @Huntsmen with an absolute NAILBITER round 11 win over the @TorontoUltra. They move on in the Winners bracket here at Atlanta! #BeTheHunter pic.twitter.com/8WSUz5FLo2

Paris Legion secured a first map victory against Minnesota RØKKR but were not able to maintain the success. Minnesota won Search and Destroy on St. Petrograd and Domination on Hackney Yard. Minnesota sent Paris to the losers bracket with a final Hardpoint win on Azhir Cave.

Rokkr was unable to replicate the same success against Chicago Huntsmen in the Group B qualifier match. Minnesota started off strong with a 250-107 Hardpoint victory on St. Petrograd but could not maintain the momentum. Chicago went on to win Gun Runner Search and Destroy where Arcitys managed to secure 14 kills and help tie the series 1-1. They went on the win a Domination match on Hackney Yard where Envoy dominated Minnesota and constantly slayed out the team on their home flags. The Huntsmen won the final Hardpoint match on Gun Runner sending Minnesota to the loser’s bracket.

Paris Legion faced Toronto Ultra in the loser’s bracket and achieved a quick 3-1 victory. Toronto started off strong with a Gun Runner Hardpoint win and a strong Search and Destroy performance on the second map. Toronto could have secured the second map victory, however Paris achieved a 6-5 victory. Paris wrapped up the series with two more consecutive wins.

Minnesota and Paris faced off for the second time this weekend in the second Group B knockout match. The series went to map five with each team taking turns winning a map. Minnesota RØKKR secured their victory with a brutal 6-0 Search and Destroy victory on Gun Runner knocking out the European team. The victory secured Minnesota’s spot in the semifinals against Atlanta FaZe.

The semifinals started off with one of the most intense series’ of the weekend. Atlanta almost suffered a shutout defeat from Minnesota but were able to come back and secure a reverse sweep.

Atlanta maintained a lead through most of the first Hardpoint match on Hackney Yard. Minnesota managed to make a comeback and secure a 250-211 victory. Minnesota maintained their strong performance on Piccadilly Search and Destroy with a 6-2 victory. Atlanta was not down for the count, however.

FaZe won a 169-140 Hackney Yard domination led by an incredible performance from Chris “Simp” Lehr. Simp managed to secure 28 kills in the match and outslay the Minnesota roster. Atlanta took the series to map five with a 250-205 Hardpoint victory on Gun Runner.

Map five was an intense Search and Destroy match on Gun Runner. Tyler “aBeZy” Pharris helped secure the reverse sweep with a 13-kill performance. FaZe achieved a 6-4 victory and secured the spot in the Grand Finals.

REVERSE SWEEP.@ATLFaZe come all the way back to defeat Minnesota @ROKKR and punch a ticket to the Finals of their own Home Series! #EZAF pic.twitter.com/IoHyWyOPO5

Chicago Huntsmen and Florida Mutineers competed for their spot in the Grand Finals which resulted in the biggest upset of the weekend.

Huntsmen won the Home Series in London earlier this month and were predicted to make another appearance this weekend. Chicago started off strong and secured the first two map wins which seemed to indicate a sweep was on the way. Florida refocused and gave Chicago their first lost of the season and achieved a reverse sweep.

Florida maintained the lead for most of the Hardpoint match on Azhir Cave. Chicago was able to come back and win with a strong performance by Dylan “Envoy” Hannon. The second map was Arklov Peak Search and Destroy where both teams traded rounds and had stellar performances. Chicago again secured the map with a 6-4 victory.

Florida managed to turn things around and win the third map with a 167-121 St. Petrograd Domination win. The team maintained the momentum and won the fourth map with a strong performance from Cesar “Skyz” Bueno and Preston “Prestinni” Sanderson.  Chicago Huntsmen’s Alec “Arcitys” Sanderson is Prestinni’s twin brother which added another layer of intensity to the series.

Florida Mutineers continued to dominate Chicago and took a 6-2 Search and Destroy victory on Gun Runner. Florida delivered Chicago their first series loss and secured their spot in the Grand Finals against Atlanta FaZe.

Florida @Mutineers complete the reverse sweep and are moving on to the finals vs @ATLFaZe! #FearTheDeep pic.twitter.com/cd5EHNlmsx

Florida Mutineers were able to deliver one of the biggest upsets of the weekend but failed to go all the way. Atlanta dominated Florida on Hardpoint St. Petrograd with a 250-138 victory. Florida was able to secure a few rounds in the second map but ultimately lost 4-6 on Gun Runner Search and Destroy.

The third and final map was Domination on St. Petrograd which was a very intense match. Florida did not lose without a fight and managed to keep the score within 20 points. Atlanta was too much for Florida to handle, however. The hometown favorite achieved a 148-137 victory over Florida and became the first team to secure a championship in front of their home fans.

The Atlanta Home Series proved that Chicago Huntsmen can be defeated, and Florida Mutineers are a team to keep an eye on. Atlanta secured 50 CDL points for their victory which places them in second place behind Chicago.

The next CDL Home Series will be hosted by the two Los Angeles teams, Guerillas and Optic Gaming on March. 7-8.