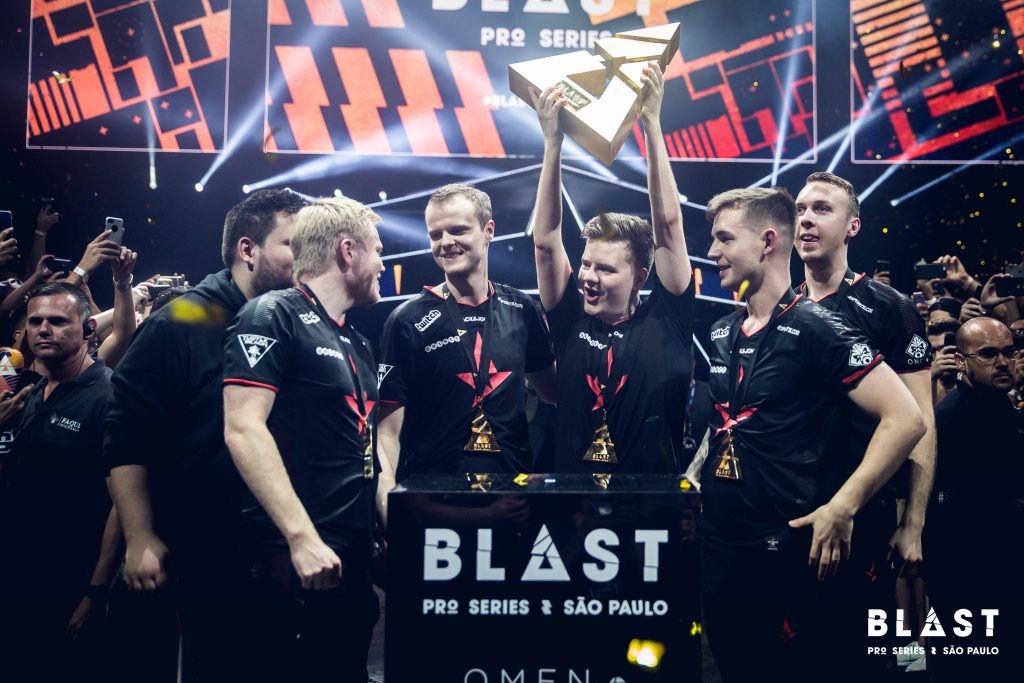 Home to perhaps the most impassioned Counter-Strike fans on the planet, Brazil housed six of the best teams this weekend at the Ginásio do Ibirapuera in São Paulo for BLAST Pro Series. In the end, it came down to another nail-biting series between the North American and Danish juggernauts where yet again, Astralis came out on top.

There’s always an undertone of excitement when a professional team has the chance of playing an international LAN in front of their home crowd; that’s amplified through the Brazilian fanbase where Counter-Strike embodies more of a religion than a game. In the case of hometown heroes, MIBR, though the tournament proved to be a very sobering experience.

After bowing out in last place without managing a single map win, Gabriel “FalleN” Toledo admitted “This tournament was kind of a wake up call for us.”  The team continues to try to draw off previous success in 2017 under the SK Gaming banner. Just last week, MIBR fell prematurely in the WESG Quarterfinals to Windigo Gaming where on paper, they were a heavy contender for first — adding some unnecessary salt to the wound.

Big changes happened with the organization at the end of last season with the reacquisition of Epitácio “TACO” de Melo and coach, Wilton “zews” Prado. MIBR has struggled to get into the form we all presume them capable of being in, though, it seems that the team is on the right track. Sure, the results at this event were far from indicative of some sort of progression, but the attitude of the team appears to be sensible and dedicated to improvement. Despite the rough placing and their performance, the Brazillian crowd still stayed true to their roots and rallied them on to their finish.

ENCE Hangs Alongside the Best

Unlike MIBR, ENCE had decided to withdraw from the WESG Finals in Chongqing, China after their IEM Katowice run. It was a choice that had them looking refreshed and conditioned in their BLAST Pro Series performance.

The well-matched series ended with a draw on Overpass where Liquid’s 11-point kill differential would be the decider in pitting them against Astralis over ENCE. Beyond what was surely a disappointing placing for the Finns at this tournament, we can’t overlook just how far this team has come in such a short time. Katowice was our first real taste of what this team is capable of, and they’ve already fully embodied their new global ranking among the professional Counter-Strike circuit.

With the fall of ENCE, the Liquid vs. Astralis Grand Final would be staged in São Paulo. Liquid showed prowess and dexterity while Astralis boasted a faultless 5-0 Round Robin record coming into the best-of-three series.

In the veto, Liquid picked Dust II, which has historically been a very comfortable map for the North American squad. Astralis would go on to ban Cache, a map that may have been more evenly matched and an overall good choice by the Danes in the name of coming out on top in this series. Naturally, the veto would end with an Astralis Inferno pick—one of their best maps, second only to Nuke—then leaving Overpass to be played on the third, if it were to go that far. Needless to say, the series was looking spicy before it even got started.

Things opened up on Dust II where Liquid would show exactly why the team feels so at home on the map. It’s tough to feel any level of comfort while sharing a server with Astralis and the 13-16 scoreline barely gives the whole story here. A collection of star plays from both sides kicked the intensity up several notches and audibly got the crowd going. Ultimately, Liquid would be able to dish out a little more, allowing them to edge past Astralis as they moved onto the second map.

Astralis shined bright on Inferno as they normally do, establishing what felt like a phantom presence around the map. This left Liquid timid and slow to adapt as the Danes strung together the first ten rounds. One thing noticed in the first half collapse of Liquid was the absence of Jake “Stewie2K” Yip—at times, a catalyst for the team’s map success, he was virtually invisible on the CT-side of Inferno. Though, Stewie and company would turn things up before the half, putting a few on the board setting the scoreline at 11-4 as they transitioned onto the other side.

Winning the pistol got Liquid off on the right foot, parlaying that momentum through the next three rounds and getting them back in the game. However, the Danes were too hot to handle on Inferno, closing the series out 16-8.

Everything in São Paulo came down to Overpass on a map Liquid were willing to settle the final score on. The reality of what they would meet though was a stiff Danish offensive side – garnering 13 rounds in the first half. The North Americans have been known to pull things close together and salvage a lofty deficit but not here—Astralis were simply too sharp. The coordination and cohesiveness of their opposition forced Liquid into situations that they weren’t prepared to handle. Liquid quickly lost control of the map, resulting in a 16-2 loss.

With a 2-1 series score, Astralis were crowned as the champions.

Thank you SO MUCH to everyone in the arena, our sponsors, everyone back home and our families 🖤❤️#ToTheStars ✨ pic.twitter.com/eMJibDNY1x

The Danish legacy is extended farther by the win here at BLAST Pro Series: São Paulo as they add another accolade to their already impressive resume. As for Liquid, it seems to be the same song and dance for the team as the group played bridesmaid to Astralis for all of 2018. Though São Paulo wouldn’t house the beginnings of an Astralis overthrow—there are healthy signs being shown from the overall evolution of the professional circuit when it comes to teams narrowing the distance between the Danes and the rest.