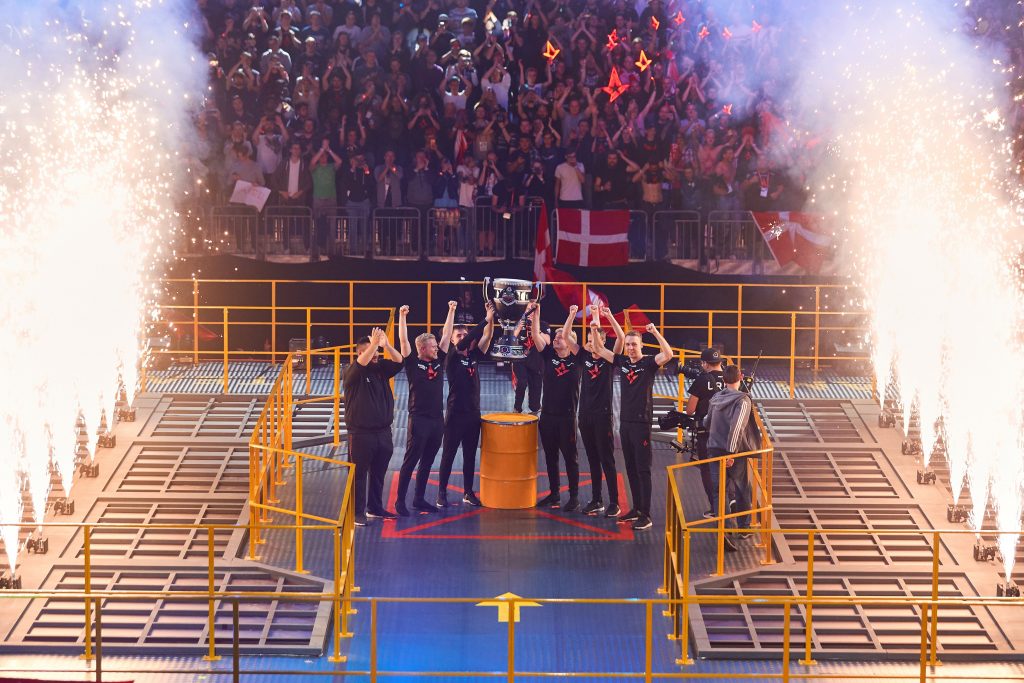 Astralis lifted the trophy at the StarLadder Berlin Major. (Image via StarLadder)

Astralis has become the Starladder Berlin Major CS:GO Champions with an impressive 2-0 victory over AVANGAR. With this result, Astralis has set two records, by becoming the only organization to win four Majors and to win three back-to-back. In addition, they took home US$500,000 as a reward for their success. With these highlights set, let’s look at how they did it.

Astralis did not hold back in this final. Astralis opened the series on their Inferno map pick and ran away with the first half. Their Terrorist-side was amazing, to say the least, with eight consecutive round wins. AVANGAR got themselves on the scoreboard with three round wins, but it was a devastating 12-3 lead for Astralis. Hope did glimmer for AVANGAR though as they won T-side pistol. However, when Astralis got their gun rounds they took control and closed the game to a 16-6 win.

A similar story occurred on the second map on AVANGAR’s Dust II pick. Astralis once again won the pistol round and found themselves a few easy rounds. AVANGAR purchased on round 3 and took a round win. Although, Astralis rallied after the early defeat and snowballed more round.  AVANGAR put up some resistance but it wasn’t enough; Astralis had earned an 11-4 half. On the side switch, AVANGAR showed promise with a round defuse. Although, Astralis managed to plant and could afford the next round. This momentum was all they needed to win the series 2-0 with a 16-5 scoreline.

AVANGAR’s glamour they showed throughout the legends and early Champions stage seemed to have dissipated. Their Dust 2 seemed to fall apart at the hands of Astralis despite the successful runs against Renegades and Team Vitality. Their ability to shut down their opponents didn’t exist and that was a key to their victories in their last few games.

As for their individual level, the X-factor they carried around disappeared. Whether that was because the old Astralis had returned, or whether stage fright got the best of them. Whatever the reason was, their notable stars in Timur “buster” Tulepov, Dauren “AdreN” Kystaubayev, and Dzhami “Jame” Ali had a noticeable dip in performance. In particular, buster had a 4/3/18 KAD on Dust 2, the map he earned a highlight on merely 24 hours before. However, not all is doom and gloom for these underdogs, everyone other than AdreN has never been to a final. Maybe next Major they will not have the fear of God inside them.

Anyway @astralisgg played super well, shoutout to them. Deserves win!
We’ll keep working and we will try show our best for the next one. And big thanks to @StarLadderCSGO for this awesome event

Astralis has managed to break two world records this tournament. First, they have had their third back-to-back Major championships, having won in Berlin and previously at the IEM Katowice Major 2019 and the FACEIT Major: Londo 2018. The second achievement is they are the only organization to win a Major four times, the fourth being the ELEAGUE Major: Atlanta 2017. These two achievements are fantastic, creating history in Berlin.

Furthermore, the context surrounding their success at Berlin makes this feat even more jaw-dropping. Since IEM Katowice, the previous 2019 Major, Astralis had entered a slump. They were known for skipping events, making excuses and when they did turn up to an event, they’d lost their x-factor. This was noticed throughout the summer at various events. Meanwhile, their rivals in Team Liquid found their own era. Astralis’ shaky form continued throughout the Berlin Major until they found themselves in the quarterfinals when they took down Team Liquid 2-0. Given the sharp rise in performance over the Champions Stage, this is an incredible feat of strength.

CS:GO may be re-entering the Astralis era. The next big battle for the team will be at ESL One: New York 2019, where they will once again be attending alongside Team Liquid. If Astralis continue to impress as they did in Berlin, then there will be no questioning a resurgence of the Astralis era.