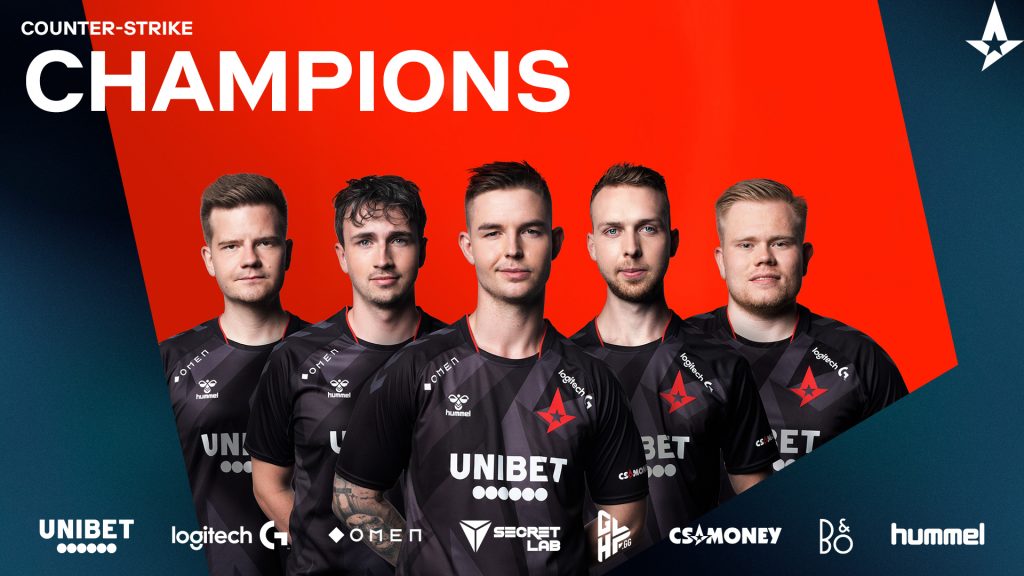 Europe’s long and arduous ESL Pro League Season 12 playoffs have come to a close. In the end, Astralis are back on top of the Counter-Strike world after a massive lower bracket run and a reverse sweep against Na’Vi in the Grand Finals. The Danish squad’s road to the trophy contained both dominant showings and close calls.

FROM THE LOWER BRACKET, FROM TWO MAPS DOWN.

They reverse sweep @natusvincere and take the series 3-2!

Astralis came out of the group stage in good shape. They earned a 6-1 record and first seed with their only loss coming in their first match against Complexity. Astralis were looking to continue their six match win streak against fellow their Danish countrymen in Heroic. However, round one of the playoffs did not go their way in the slightest. After two incredibly demoralizing 7-16 losses on Vertigo and Nuke, Astralis dropped down to the lower bracket.

Astralis now needed to win five matches in four consecutive days to take home the ESL Pro League title. Just one more slip up would see them eliminated. It was no easy gauntlet to run either.

Their first opponent would be the CIS’s Team Spirit. Spirit did very well to hold up on their own Inferno pick. At one point, they even held a 13-11 lead on the map. Overtime was eventually needed to separate the teams. Astralis’s composure allowed them to take the win 19-16 to go up in the series. Nuke was up next. The Danes looked much better than in their match against Heroic and found the 16-12 victory after winning nine of the last 10 rounds on defense.

Astralis’s next challenger was a Complexity squad still reeling from the loss of Owen “oBo” Schlatter. The match was a quick one. Astralis had little trouble dealing with COL, taking them down with a 16-6 on Vertigo and a 16-8 on Nuke. Peter “dupreeh” Rasmussen was the standout performer, earning a 47-18 K-D ratio.

At this point, the top four at ESL Pro League S12 had been solidified. Every team remaining would be difficult to beat. Coming from the lower bracket, Astralis had tough a double header day on October 3rd to determine who would meet Na’Vi in the grand finals.

First up was mousesports, a team who also lost in the first round of playoffs but were on a strong run. Starting on mousesports’s map pick of Dust2, Astralis ground them into the dust. A 16-3 performance quickly gave the Danes a map lead. However, mousesports were able to fire right back on Inferno. A nearly perfect 14-1 CT side allowed mouz to take map two 16-6 and even up the series.

Nuke was the tiebreaker map. Both squads played a very strong defensive game, resulting in back to back 12-3 CT halves. Astralis only managed to take one round on their T side. That one point was enough after the Danes won all three defensive rounds with aggressive play. The 19-17 result put Astralis through to rematch Heroic in the lower bracket finals.

After a three hour break, the match was under way. Heroic opened up with another Vertigo pick. Unlike in their first round matchup, Astralis were very prepared this time. Their one T side round during their initial meeting increased to six in this one. The second half saw Astralis effectively shut Heroic’s offense down. They only allowed four rounds on their way to a 16-13 victory.

Astralis then threw a curveball in the form of Overpass. Despite losing five of the first six rounds, Astralis fought back on their T side to secure a narrow 8-7 lead. Heroic won the second pistol round as well to get themselves on double digits. The advantage would not last long as Astralis laid down an iron defense. A 16-12 win completed Astralis’s revenge match in a 2-0 sweep. Only one more team stood in their way.

Na’Vi was the final boss of ESL Pro League Season 12. The upper bracket representatives had only dropped one map in the playoffs. Their spot in grand finals came after just seven maps played. Meanwhile, Astralis had played 11. Na’Vi started with a one map advantage, meaning they only needed two to win while Astralis needed three.

Dust2 was up first courtesy of Na’Vi. The CIS squad got going early on the T side, taking an 8-2 lead. Astralis managed to pull it back to a 6-9 deficit, but Na’Vi still held a firm advantage going into the second half. The Danish side evened up the score off of a pistol win but couldn’t keep that momentum going. Na’Vi’s defense rallied behind Aleksandr “s1mple” Kostyliev’s AWP and ended the map 16-12.

With Na’Vi now up 2-0, Astralis had no choice but to reverse sweep if they wanted the trophy. Nuke would be their first test. Starting on the T side, Astralis won the pistol round and went up 3-0. The usual CT sidedness of Nuke took over as Na’Vi quickly racked up points. The Danes still were able to find three gun rounds, putting them down 6-9 at the half once again. This time however, Astralis found the defense they needed. They came back from a 6-12 deficit, winning the last three rounds of regulation in a row to take their first map 16-14.

Next up was Na’Vi’s second pick of Train. Initially, the map looked like a complete wash in favor of Astralis. After losing two of the opening rounds, their CT side was flawless. Their newest addition in Patrick “es3tag” Hansen was playing one of his best games for the squad yet. A 13-2 half nearly guaranteed that we would see a final map.

Astralis found map point at just 22 rounds in. Even so, Na’Vi was not about to give in. Rallying behind s1mple, the CIS squad took the last eight rounds in a row to secure their own 13-2 half and force overtime. It took two extra periods to decide a winner. In the end, Astralis managed to take the 22-19 win. Es3tag’s 40 kill performance also barely edged out s1mple’s 39.

One final showdown on Overpass was needed to determine the ESL Pro League Season 12 winners. Both teams had played the map twice so far in the tournament, so it was anyone’s guess as to the victor. Astralis came out on the T side guns blazing. They started with a five round win streak before Na’Vi could even react.

They then put six more on the board before the side swap. Nicolai “device” Reedtz led his team with 20 kills just in the first half. Na’Vi needed a similar performance on their offense. Things looked good early on as they won seven of the first eight rounds. The deficit slowly but surely closed to just one round as Na’Vi were looking to make the comeback. However, the day belonged to Astralis. The final four rounds of the game all went the way of the Danes. With a score of 16-11 and a map score of 3-2, Astralis completed the reverse sweep and earned their third ESL Pro League title.

This win marks a monumental return to form for the once undisputed top team in Counter-Strike. Their roster issues over the past few months have certainly been rough. Even so, Astralis have once again proved that they can never be underestimated.

As for Na’Vi, this grand final was yet another so close but so far moment for them. They have been a title contender in every big event of the online era but still haven’t found a trophy in Europe since IEM Katowice in early March. The next time they will have a chance at glory will be at BLAST Premier Fall in late October.