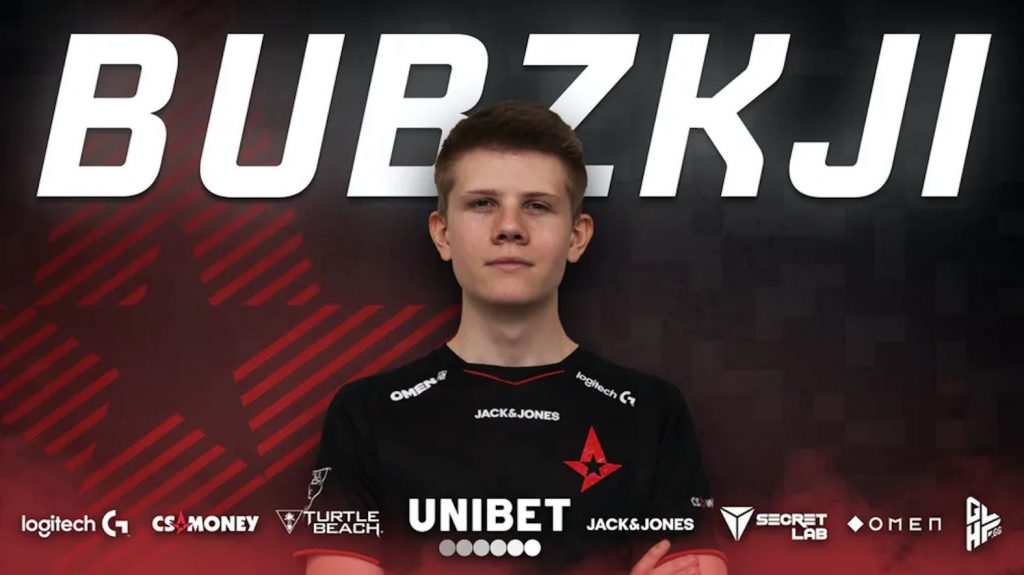 Caption: Bubzkji joins Astralis as a part of their seven-man roster after leaving MAD Lions. Image via Astralis.

Astralis has confirmed that Lucas “Bubzkji” Andersen has signed to the team on a two-year contract. Instead of joining the team as an extension to their rotating player strategy, Astralis management has decided to release Jakob “JUGi” Hansen.

Welcome @Bubzkji to the Astralis roster. We're looking forward to play with you.

This announcement confirms that Bubzkji is part of Astralis’ seven-man roster. He will operate in the same capacity that Patrick “es3tag” Hansen has on the team. Astralis currently have both es3tag and Bubzkji in the starting line-up for the team ahead of their competition post-player break. Both players will then rotate in and out of the starting line-up, depending on who is resting. As it stands, both Andreas “Xyp9x” Højsleth and Lukas “gla1ve” Egholm Rossander are on leave, although the latter will return sometime after the player break ends, as his three months expires soon.

Bubzkji joins after spending the last seven months on MAD Lions. MAD Lions is a rising Danish team recognized across the world, after their success in FLASHPOINT, DreamHack Opens and more. Astralis have signed yet another promising Danish star to aid the team in future events. This comes after the likes of Marco “Snappi” Pfeiffer and JUGi were the first to try for Astralis with both players failing to give Astralis the boost the brand’s prestige needed at the time.

In the Astralis announcement, Bubzkji said: “When I heard about Astralis’ interest, I already made up my mind: I want to be a part of this team and this organization and this is where I want to play! I had other options, but after talking to zonic and Kasper about the role I will have, the ambitions of the team, and how they work I am convinced I can contribute to the team and I can become a better player.”

Astralis aim to kick off their return to work with an offsite bootcamp beginning August 3rd. The team and their two new players will get together and train for their first big event post player break, ESL One Cologne.