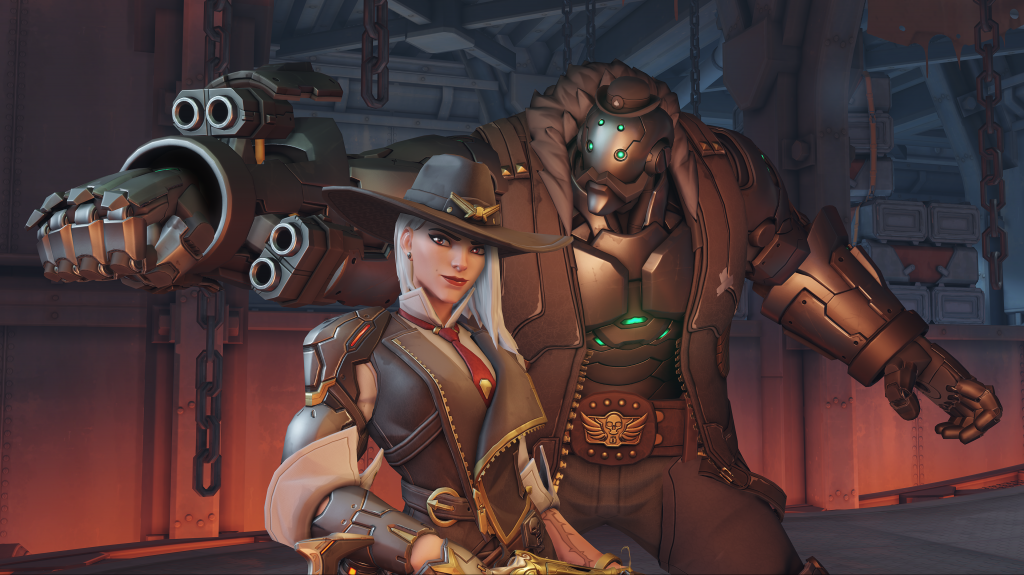 Ashe - the leader if the notorious Deadlock Gang - was unveiled as Hero 29 at Blizzcon. (Image courtesy of Blizzard Entertainment)

The mystery is solved– our 29th Overwatch Hero has been announced!

Elizabeth Caledonia Ashe, more commonly known as simply “Ashe”, is an American Southwest beauty with a cowboy’s demeanor and a mean shooting arm. Growing up in a wealthy family, Ashe didn’t suffer the hardships of many around the globe. She never took part in Overwatch or Blackwatch, never dipped her toes into poverty or war. Instead, she grew up with the most charismatic of parents, talkers who were able to get themselves far in life. She had “tea and biscuits, she had her butler” and that’s about all she kept from her former life.

After a chance encounter with the young debonair McCree, her eyes were opened to the “possibilities of the criminal side of things.” Nothing crazy, mind– a heist here, a stick-em-up there. She fell for this new world where she could twist her charisma from a way to move up in the world into a tool to unite the outlaws of the South.

Now, Ashe acts as leader to a notorious band of outlaws: the Deadlock Gang. Without the background of Overwatch to balance her out as it did McCree, Ashe fell to the outlaw lifestyle though not alone. She grew up with a butler and kept an Omnic butler throughout her adventures in the badlands: B.O.B.

A rifler with a token gun — Viper — Ashe is able to fire on all cylinders. Two, to be precise: semi-automatic and aim-down-sight. The Viper is her main attack, allowing her to shoot rapidly with a high spread in semi-automatic mode or line up precise shots in aim-down-sight mode. In aim-down-mode, she sacrifices speed for increased damage. This dual attack allows her to be incredibly versatile in her role as a ranged damage dealer.

Similar to Pharah’s Concussive Blast, Coach Gun allows Ashe to utilize her “short-range, high-impact” sidearm to knock away enemies — or knock back Ashe for mobility — and deal a burst of damage.

Her Dynamite ability throws an explosive that detonates after a set amount of time (think Junkrat’s basic attack) which deals a massive amount of damage to enemies while also applying an incendiary DoT to those damaged. Ashe can shoot the dynamite to detonate it early. Essentially, Ashe lives out her role as fiery vixen of Overwatch both literally and figuratively.

Ashe’s Ultimate is her crowning glory. Frankly, we all held a small wish that he would be his own Hero. He’s the one, the only: B.O.B.! Ashe summons B.O.B. into combat to fight by her side. He throws down suppressing fire with his arm cannon; he knocks enemies up, down and all around; and he rushes forward to get in the enemy’s face and give Ashe the space she needs for Viper to rain down on her competition.

Using her full arsenal, Ashe is able to accomplish the role of a longer ranged sniper DPS or a closer ranged spray-and-pray damage dealer. With her burst damage and massive amounts of utility from Coach Gun and B.O.B., Ashe is a force to be reckoned with. Expect her to be a counter to longer ranged DPS like Widowmaker or Pharah, while also fulfilling a similar role as McCree or Reaper. In fact, at BlizzCon the dev team revealed that they had trouble creating a niche for Ashe between McCree and Reaper– let’s hope they’ve struck the perfect balance.

There will be hell to pay if you mess with Ashe. Count on it.