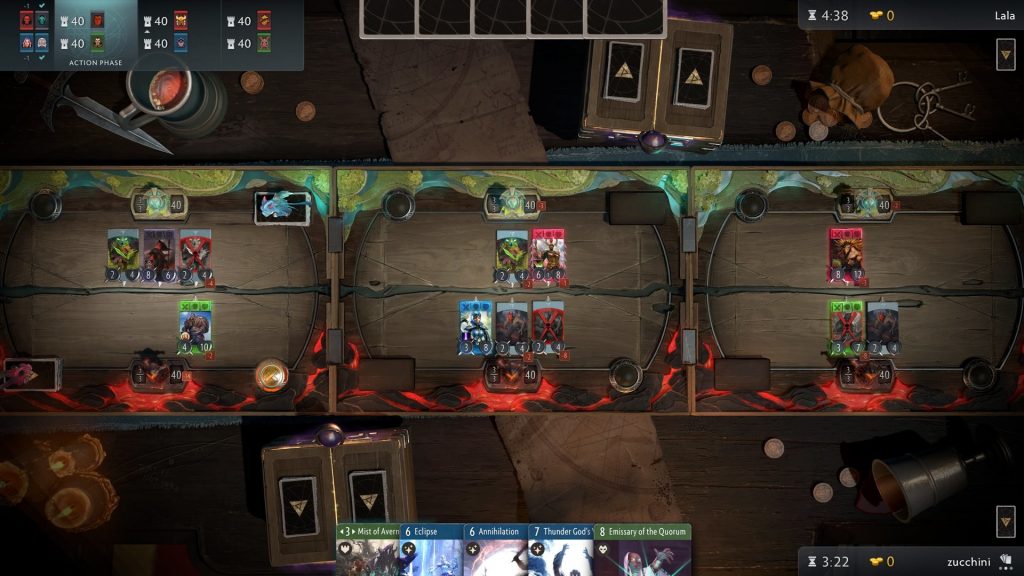 Joel Larsson, a top Magic: the Gathering professional who skipped a Pro Tour event to participate in the Artifact tournament, took home $4,000 (USD).

On November 11, Joel Larsson won the Artifact Preview Tournament. Larsson, a top Magic: the Gathering professional who skipped a Pro Tour event to participate in the Artifact tournament, took home $4,000 (US) from the $10,000 prize pool. Second place and $2,000 was won by Miguel “Mogwai” Guerrero, a notable Gwent player.

The tournament began with one day of Swiss group stage play. A pool of 128 registered players began the day with thirty minutes to draft a deck. Once completed, they were being paired off for a Round One match. Each subsequent round had players matched with someone who had the same win-loss record. Winners of Round One were paired together, while losers were paired. Another deck draft was done before Round Four, and by the end of the seventh round, we had the Top Eight players in the tournament.

Larsson was the only player to make it through the group stage without dropping a single match. His 7-0 record put him in the top seed, while the remaining seven players shared a 6-1 record.

Day two opened with another deck draft. Larsson drafted a low mana cost Green-Black deck, with only one card costing more than five mana. This meant all his cards could come online in early rounds, leading to more aggressive play than possible with a deck with more high-cost cards.

Additionally, Larsson was able to draft two Sorla Khans, a Black hero. Her signature card is the improvement card Assault Ladders, which gives allies a +2 damage bonus when attacking towers. This card puts pressure on a lane because the tower can be brought down more quickly. He also picked up a pair of Gank cards, which allow an allied black hero to battle a unit in any lane. This can be used to protect units in other lanes or to create a pathway to that lane’s tower.

Larsson’s Grand Finals opponent, Mogwai, drafted a slightly slower deck due to a pair of seven mana cost cards and being tri-color. He drafted Green/Black with a splash of Red – a single Red hero (Bristleback) and four Red cards. Mogwai’s deck also included four Oglodi Vandals, a Black card that deals four damage to the enemy tower in the lane when played.

Both players sailed through the single elimination bracket to the Grand Finals without losing a match.

The first game of the Grand Finals came down to a strategic use of the “hold” option during shopping. During the shopping phase, three items are available to the player for purchase. One is from the player’s item deck, another is a consumable, and the third is a random item from the Secret Shop. That last item changes from one round to the next, but there’s an option to spend a single gold to “hold” the item. At the end of Round Six, Larsson was able to hold a Red Mist Maul—an item that grants +2 Attack and +5 Siege. When played, the latter allowed his mid-lane Sorla Khan to deal five damage directly to the tower when she was blocked by Mogwai’s Centaur Hunter. Larsson won the game with two tower kills.

The second game of the Grand Finals featured Larsson’s Savage Wolf cards. When deployed, this card gains +1 Attack and +2 Health after the combat phase. This means the wolf can grow to be a more intimidating creature over multiple rounds. Counteracting those was Mogwai’s Chen. This hero has an Active Ability, with a four-round cooldown, that can be used to take control of one of the opposing player’s creeps. The cooldown begins from the start of the game, meaning Mogwai had to wait until Round Five to make use of it, by which time the hero had been killed and had to wait to respawn. When the Chen returned, Mogwai did not immediately take control of an enemy creep, and Larsson was able to swap the Chen to another lane.

The Artifact Preview Tournament was commentated by Beyond the Summit (BTS), a popular esports studio known for their cozy Summit series of tournaments. It took the casters a day to find their rhythm in terms of casting for an audience who had only seen limited gameplay prior to this tournament and who had not yet been able to play the game themselves.

The second day began with a gameplay tutorial video, helping ease new viewers into the rules of Artifact. The rest of the day had a balance of newcomer-friendly explanations and some discussion of the higher-level strategies that the Top Eight players were employing.

Larsson was one of four competing players on hand at the BTS studio to provide analysis during the event. Players Adrian “Lifecoach” Koy, Janne “Savjz” Mikkonen and George “hyped” Maganzini were also present but didn’t make the Top Eight.

Artifact is currently available on Steam for pre-purchase. The game releases on November 28th. A beta period for individuals with keys begins on November 19th and the NDA for current testers will lift on November 17th. Expect to see many players beginning to stream content on that day. Beyond the Summit has announced it will host an Artifact House Party from November 17-19 with several personalities invited to attend.