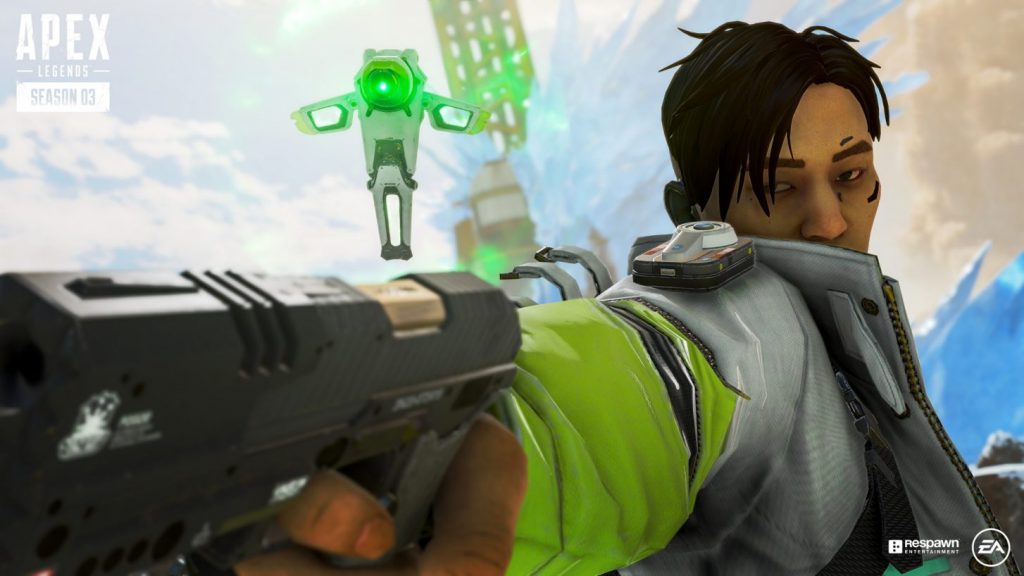 Crypto and his drones are the latest addition to Apex Legends. (Image via EA)

Apex Legends Season 3 dropped October 1, gifting us with a host of changes, a battle pass for the season, a brand new map, and of course, a new Legend to play with in the form of Crypto, a surveillance specialist with a hidden past. And after a few days with Apex’s latest combatant, let’s cast a verdict on him.

Crypto, real name Park Tae Joon, is a Recon-type hero, like Bloodhound, who specializes in scouting out his opponents. His primary ability is his “Surveillance Drone,” an area camera with a 40-second cooldown if destroyed. If not destroyed, the drone will remain active until recalled. The ability also works like an automated pinging system, which highlights enemies. His passive, “Neurolink” allows his teammates to see what his Surveillance Drone (his tactical/active ability) highlights, adding an extra level of utility to his

This is the core of Crypto’s kit and the thing that makes him unique to play. The drone gives you another set of eyes, and it’s perfect for throwing behind you as you enter a building to ensure you’re not being flanked. Or for final showdowns where you absolutely have to get the drop on the enemy.

Crypto’s ultimate is “Drone EMP,” an area of effect blast centered on your drone. The explosion deals 50 shield damage, slows players, and destroys traps (sorry, Caustic mains), making it the perfect opening salvo in an engagement.

Join our cast of Legends – including the newest Legend, Crypto – on the dropship as they’re whisked from Planet Solace towards World’s Edge on Planet Talos. pic.twitter.com/vp7UzVrXaC

Besides his abilities, Crypto is your run-of-the-mill Legend with no special movement quirks. His drones have collision, although it’s unreliable, and are also easily destroyed, making path-blocking shenanigans unviable. Because of the inconsistent collision, while drones can occasionally be used to gain access to platforms etc. there’s not some game-breaking strategy that only Crypto can facilitate.

Crypto’s strength comes from taking being able to pick the fights his team engages in. His drone should allow you to spot enemies before they spot you, and either use your ultimate to start the fight or back off accordingly. He struggles against Wraith or Pathfinder, who can use their maneuverability to reshape a fight. However, he can also keep the pressure on these Legends far more effectively, because his drone can spot them out easier. It’s also worth noting that Crypto is hugely vulnerable while activating his primary ability.

Pro tip: Keep your Crypto in a safe spot

In the competitive scene, it’s unclear why a team would pick Crypto over a Pathfinder or Bloodhound, who all arguably perform better in the scouting role, and still have utility left over after their primary ability has been used. His ultimate all but ensures that you win a fight if it lands, but experienced teams shouldn’t be baited into fighting a Crypto close range, where he can nuke shields and limit escapes.

Ultimately, Crypto is an incredibly interesting addition to the game with some notable flaws. With no true passive, and instead just the ability to share his active, Crypto feels very much like a one-trick pony. Apex Legends’ design philosophy has prevented it from creating a character that thrives in a defensive position. While a surveillance-based role would, in theory, be perfect for camping, the offense-oriented nature of the game prevents that. Instead, Crypto is a scout, who relies on getting the drop on his opponents, and hoping he can activate his ultimate before they run away from his drone. Full details on Apex Legends Season 3 is available on the official website.