Among Us, TNC Exhibit Top Form at DOTA Summit 13 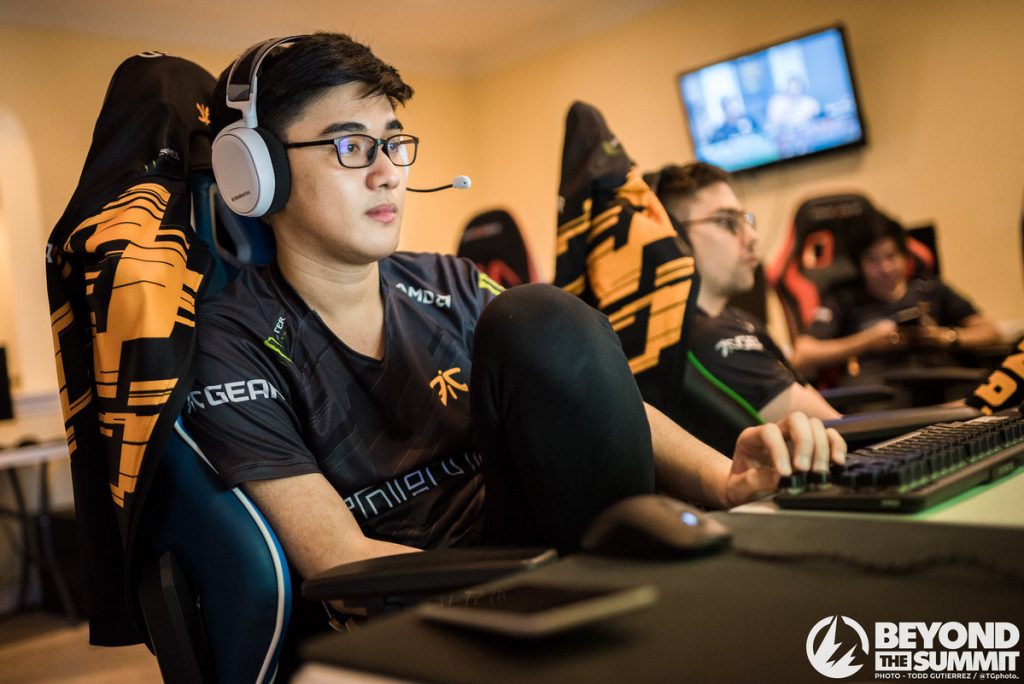 Even with a sudden roster change to worry about, the SEA dream team Among Us does not seem to have missed a beat. (Photo courtesy Beyond the Summit)

The Valve-sponsored 13th edition of DOTA Summit is well underway, with the competition in the Southeast Asian division heating up after eight days of play so far. Teams in the region are currently battling online for their share of the $100,000 prize pool — with the playoff picture slowly coming into view as the group stage rolls on.

Among Us, who placed third at their first appearance in an online tournament at the BTS Pro Series in September, have once again made their mark here by executing a fast start in the group stage. The roster led by Carlo “Kuku” Palad and newly-acquired Park “March” Tae-won have notched the best record in the preliminaries so far, notching nine wins and three losses in terms of maps to hold onto the top spot.

True enough, their only stumbles thus far have been against three of the four teams after them in the standings — namely TNC Predator, Adroit Esports, and BOOM Esports. Of course all three are highly respected and capable members of the SEA region, so to lose a map here and there to such lineups is expected even with a stacked roster like that of Among Us.

They began their Summit campaign quite auspiciously, putting Filipino team Neon Esports away two games to none on the first day of play. Muhammad “inYourDream” Rizky immediately made good on his arrival in the team, playing the carry role to perfection off the bat. Game 1 saw him with eight kills and no deaths as Faceless Void, helping his team hold Neon to the same number of kills across their whole draft. Among Us meanwhile scored 25 of their own, boosted of course by the immaculate play of Azel “Abed” Yusop as Void Spirit. 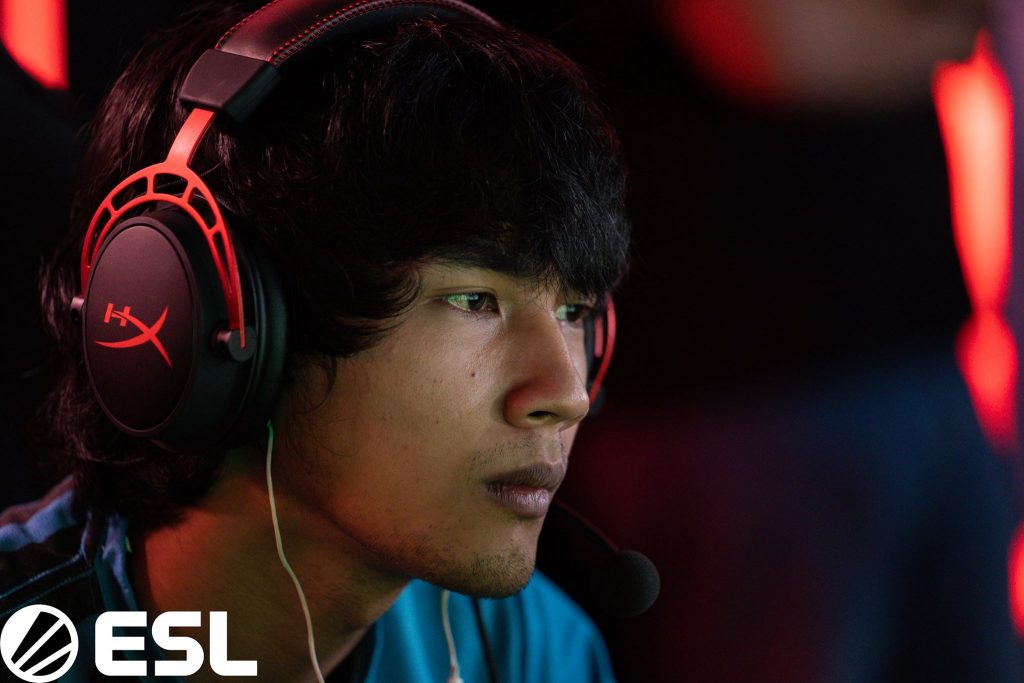 inYourDreaM has been excellent for Among Us so far, wasting no time getting into his groove. (Photo courtesy ESL)

Game 2 had a bit more action to it, with Neon finding their rhythm in the laning phase and carrying a decent amount of momentum into the mid game. Thanks to the efforts of Erin Jasper “Yopaj” Ferrer as Tiny and Andrei “skem” Ong as Sven, the Filipinos held a lead that swelled to as high as 16,000 gold by the 33 minute mark — but some scrappy play by their opponents meant that the advantage evaporated in a single botched teamfight.

Caught entirely on the backfoot with Among Us’ fed cores barreling down the middle lane, there was naught that Neon could do to stem the tide.

Among Us followed their fantastic start with yet another 2-0 victory — this time against the all-Malaysian TEAM STAR. They barely even broke a sweat in their series against Ng “YamateH” Wei Poong and his cohorts, needing just 70 minutes of total game time to put the match on ice. As expected, inYourDreaM carried the load for his team in the first map with a 15-1 performance as Lifestealer. Although the Malaysians were able to fight back here and there, the sheer power of the Lifestealer was something that they could not contend with at all. The second game was more of the inYourDreaM show, as he made heads roll with his 19-0 Phantom Assassin.

The rest of Among Us’ Summit run so far has naturally been great, and they are looking like a serious threat even with the sudden roster change that took place just nine days ago. They will need to keep the momentum going if they want to capture the title here however, as they know all to well the pain of hitting the ground running in the group stage only to falter in the late playoff rounds.

There seems to be plenty of hope right now for fans of the ever-popular TNC Predator, who find themselves currently in second place in the Summit group stage standings. Definitely a bright spot for a team that supposedly removed their captain after he had a career year with them, and for one that hasn’t had any results to really be proud of in a long time.

Much like Among Us, they started the tournament on the right foot, defeating OMEGA League Asia Divine champions 496 Gaming in both maps. TNC were quick to strike in the first game, with Kim “Gabbi” Villafuerte and Armel “Armel” Tabios dominating the contest as Faceless void and Queen of Pain respectively. Not to be outdone though, the rest of the squad definitely pulled their weight, with Timothy “TIMS” Randrup showing his immense skill as Mirana with 21 assists. The game ended after just 23 and a half minutes, showing that the Viets truly didn’t stand a chance.

The second game did not trouble them at all either. Gabbi cruised to nearly 700 gold per minute as Spectre despite not even having a Radiance, with Armel in front of him as Templar Assassin with 702 gold per minute. It was Gabbi that dealt the most damage for his team by the game’s end though, clocking in at an eye-watering total of 30,900 points. 496 Gaming looked anything but ready for their opponents, and were forced to concede the series after just 31 and a half minutes.

Certainly not bad for a team that’s been down on its luck as of late. If TNC can maintain their composure and stay on their toes, perhaps they’ll be back to winning ways — and none too soon, we might add.

The Rest of the Pack

As for the remaining teams in the Summit field, their results have been more or less what we’ve come to expect. BTS Pro Series SEA champions Motivate.Trust Gaming have recorded seven wins and just one loss so far, and with the number of games remaining on their plate going forward they have a serious shot at usurping the likes of Among Us and TNC for the top seeds in the playoffs. Heck, they could even make it all the way like they did at the Pro Series, so there’s definitely merit in watching them over the rest of the group stage.

Right below Trust are usual suspects Adroit and BOOM, though for BOOM in particular we’re sure that they’d rather not be teetering on the edge of being relegated to the lower bracket as they are now. They have just three matches to make up some ground though, so they need to get back on track if they want some of the higher seeds to themselves.

What a way to finish the day! 😱@boomesportsid secure a back-and-forth series 2-0, clawing their way back to win Game 2!

That's all from us today for #MonsterEnergyDS13 Online: SEA today, we'll see you tomorrow! 👋

The bottom five on the other hand are struggling to keep their heads above water, though given their performances as of late relative to the top teams, it’s difficult to expect much more. We’ve seen that Neon Esports are certainly capable of sneaking their way into the bracket stages of tournaments past of course, so there’s still reason to think that they might make it.

Make sure to catch the rest of the group stage from October 29th to November 2nd, via the official Twitch channel hosted by Beyond the Summit. Hotspawn will be back with more coverage of the event at the end of the preliminaries!