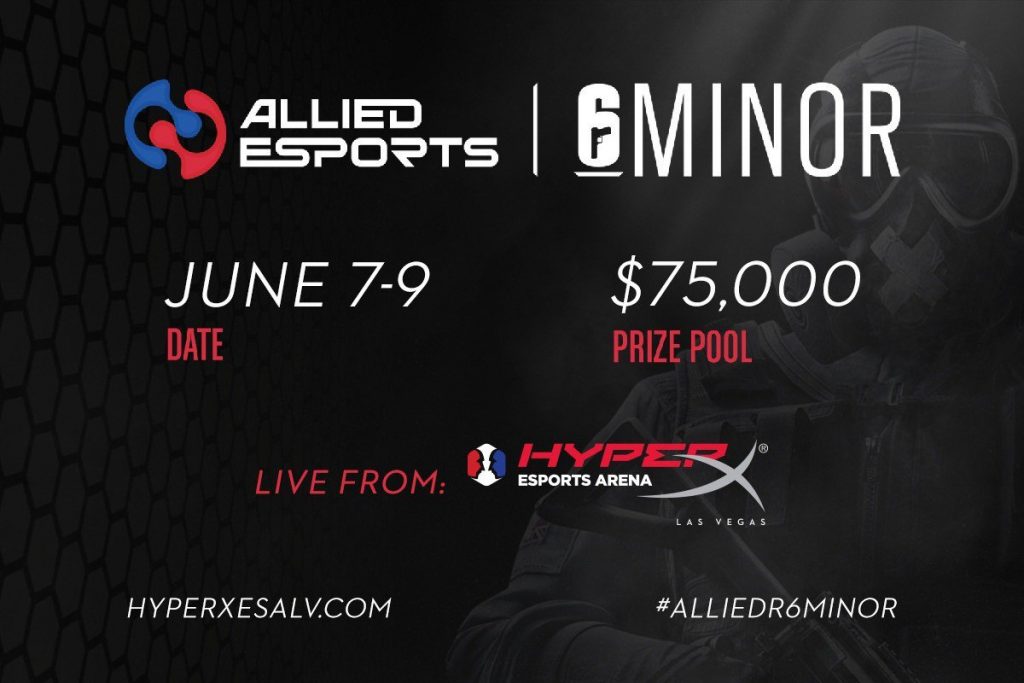 Which of the sixteen teams attending will take home the invitation to the Six Major Raleigh? (Image courtesy of @HyperXESALV / Twitter)

The Allied Esports Las Vegas Minor 2019 approaches and is the first opportunity we’ll have to witness Rainbow Six Siege Pro League Season 10 competition. The event takes place in Las Vegas from June 7-9, with one of the most unique international line-ups ever assembled for a Rainbow Six esports event.  Sixteen teams will be competing for a share of the $75,000 USD prize pool, whilst aiming for first place to secure their spot at the Six Major Raleigh in August.

Teams were selected on a first-come-first-served basis that filled the first 12 spaces. The remaining four teams qualified from their respective region’s online qualifiers.

Divided among the top eight teams only, the prize money is significant, but it’s the invitation to the Six Major Raleigh that all the teams want.

The group stage format for the Las Vegas Minor uses the Swiss System, which Counter-Strike Global Offensive Majors also use.

To qualify into the playoffs, a team must win three games. This condition can be met across the five available rounds. Two teams will qualify via a 3-0 record, two more teams on a 3-1 record with the remaining four on a 3-2 record. Losing three games eliminates a team from the tournament.

Each team has been drawn into the first round at random. Once when the first round ends, the Lower Bracket will randomly draw 0-1 teams, whilst the Upper Bracket does the same for 1-0 teams. This random seeding occurs throughout the five rounds to accommodate every possible scoresheet scenario, i.e.  2-1, 1-2 , 0-2 teams etc. The Swiss System ends when eight teams have qualified. The qualified teams will then be seeded into the quarterfinals of the playoffs where they will progress through a single-elimination bracket to conclude the Allied Esports Minor. The first round of games is available here:

Due to the large variety of teams in attendance, there are many teams to watch for, so we will pick out the best.

DarkZero Esports – This team is number two in North America. They attended the Season 9 Pro League Finals. They went out early in the quarterfinals via a 1-2 defeat at the hands of the Season 9 Champions, Team Empire. With Paul “Hyper” Kontopanagiotis (NA’s standout player despite being on the worst team) on the roster, this team is the tournament favorite.

Aerowolf – As the only APAC representative, hailing from Singapore, this team is one to watch. In the APAC LAN Finals, Aerowolf upset Cloud 9, the usual third-place team in the region. APAC now has a history of upsetting and surprising the world by how competitive they are. This team has some positive curiosity towards them and should be an exciting team to watch.

Rogue – Rogue made international appearances at every tournament in 2018. However, NA has seen a huge growth in competition in 2019, whilst Rogue’s performance has dropped-off. Consequently, they failed to perform at the Six Invitational 2019 and failed to qualify for the Season 9 Finals in Milan. The question for them this tournament is if they can still hang out on the international stage and regain some lost confidence.

Chaos Esports Club and PENTA Sports – Both of these teams have a reputation of being middle or below the pack in the EU Pro League. However, they both surprised EU fans and contested the top half of the league many times in Season 9. It was only at the final week of play they returned to the fourth and fifth position with small points between them both and second place. With such a buzz around both teams regionally, it will be great to see if they can harness it internationally.