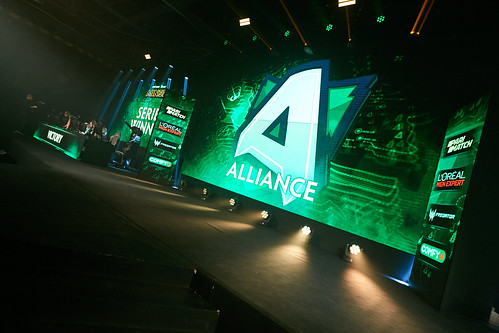 Alliance, Gambit Esports, and Team Aster are the last three team’s standing after the opening day of the StarLadder ImbaTV Dota 2 Minor Season 3 playoffs. After a thrilling day of games, European, CIS and Chinese stacks are now set for two final series to secure their place in the Major.

Despite these teams being the obvious favorites from before the start of the tournament, today’s games were no cake walk. The fourth competitor, BOOM Esports had earned their spot in these playoffs, and they weren’t about to be eliminated without a fight.

Upper Bracket Round One: BOOM Esports vs. Gambit Esports

Attempting to defy expectations, BOOM brought everything they had for this first StarLadder Minor game against Gambit. They facilitated their star mid lander Rafli Fathur “Mikoto” Rahman with Void Spirit. But despite having better lanes, BOOM didn’t win the early game. They couldn’t push against their opponents, and relied on catches and cheesy kills to stay in the game.

This tactic worked out fantastically, as Mikoto’s Void scaled into a monster. By 25 minutes, the team was pushing down tier two and three towers. Ultimately Gambit would give up the first game, outscaled by BOOM’s superior draft.

But Gambit weren’t about to be taken down by one lucky draft. The next pair of games must have been a blur for BOOM, as Gambit turned on the jets and dominated with one of the most impressive showings we’ve seen from Kiyalbek “dream`” Tayirov on his Morphling, and Danil “gpk” Skutin. For the latter, this was very much a redemption arc. Having sat out of WePlay! Tug of War: Mad Moon due to the issues revolving his attempted move to Virtus.pro, gpk was playing with a chip on his shoulder and a lot to prove. Going forward, Gambit finally looks like a team that could challenge for a Major title.

With these dominant two games Gambit had secured at the very least a top-three spot in the StarLadder Minor Playoffs.

Upper Bracket Round One: Alliance vs. Team Aster

In the opening game against Team Aster, things looked promising for Alliance. Picking up the Medusa which had been so potent for Nikolay “Nikobaby” Nikolov, the team grabbed an early lead and attempted to push. This was facilitated by a lot of strange mistakes Aster started making, such as Pangolier blinking back in and dying for free.

However, Aster were not done. Turtling and building up a substantial amount of farm, the team managed to get crucial catches again and again. Nikobaby found himself repeatedly caught with no way of escaping, and no help from his supports, who either died super quickly, or just didn’t have their cooldowns. As a result, Aster could push down lanes uncontested, and take the win.

Perhaps demoralized by this first loss, Alliance fell apart in the second game. With the incredible amount of catch from Aster’s Mars pick, the team could pick of their opponent’s with ease, right from the start of the match. Alliance’s middle barracks was taken just 24 minutes in, and with no vision they were stuck on their own high ground. With no other options, Alliance forced one desperate fight, but it was too little too late.

Aster advanced to the Upper Bracket Finals looking like the clear favorite to win this entire event. Their decisive action, dominant play and slick team fighting meant they could roll over Alliance before their carries could even have an effect on the game.

With tournament survival on the line, BOOM took on Alliance in the lower bracket. BOOM’s draft looked deadly on paper, with a Lifestealer for late game, and a Tiny and Kunkka to bully early. Meanwhile, Alliance saved their last pick for Nikobaby, giving them a slight advantage by hiding the Troll Warlord.

The game started off with better trades for BOOM, while Mikoto’s Kunkka was able to bully. Even with the mid advantage, Alliance were able to farm up very quickly, and rotate for early pressure

On the front foot, this is the attitude we want to see! Let's keep the pressure up!😤#LongLiveAlliance #KyivMinor pic.twitter.com/mrLSXgkCYP

Even with the super strong troll warlord, though, there was a problem. BOOM’s incredible high level decision making meant that they were able to constantly pick better fights. Again and again, they’d catch out Alliance, get kills, and prevent the push.

In part, this was because of Brizio Adi “Hyde” Putra’s incredible play on Tiny. This catch forced Alliance into making desperate plays, as they smoked onto the secret shop just to get Nikobaby his Divine Rapier.

This was the win condition for Alliance, and from there BOOM could do nothing. Even a clutch move from Hyde to throw Nikobaby onto the cliff during a team fight wasn’t enough to stop BOOM from winning the first game.

The next draft, BOOM took away the Troll Warlord, retained the Tiny, and picked up Invoker. Meanwhile Alliance flexed the Bat Rider, kept the Mars, gave Nikobaby Death Prophet, not something he’s played a lot in recent tournaments.

However, Alliance’s draft gave them a sizable advantage in the early game. The Templar Assassin could counter Mikoto’s Invoker mid, and for the most part, the side lanes had better harass. To prevent Alliance from getting too out of hand, BOOM sent Hyde roaming, who managed to get a lot of aggression across the map.

But the roaming was to be the death of BOOM. Three separate times, the supports of BOOM wandered into Limp on his Templar Assassin, allowing the carry to scale out of control. Quickly the game turned into a stomp, and after an initially promising game, BOOM esports found themselves crashing out of the tournament in a quick stomp.

You know whats cooking, BOOM!💥
We smash our way through Game 2 and secure Top 3! GG's @boomesportsid!

Aster have looked dominant so far in the playoffs, and so it was expected they’d dominate the Gambit. To keep that prophecy fulfilled, Aster picked up the snapfire, one of the strongest supports in the game right now, with a Slark to give them hard carry potential. On the side of Gambit, Razor and Storm Spirit were expected to do the heavy lifting.

As the game started, lanes seemed initially even, and despite a few kills given up by Gambit across the map, no one team could take the lead. Looking to grab a mid game advantage, Gambit pushed into Baron Roshan, only to get themselves killed by Aster’s superior team fighting.

This was the case for almost the entire game. Gambit would make a move, and Aster’s team fighting would win out in the end. Only Aster’s own mistake could enable a Gambit comeback. A massive throw from Aster equalized the situation, giving up almost 6k in net worth.

But even this wasn’t enough to slow down Team Aster. After a disastrous engagement in the top lane in which gpk died, Aster was able to push down mid and start a brutal two lane siege which saw three barracks fall, and eventually the end of the game.

Keen to not let this situation repeat itself, Gambit grabbed the Razor, Nyx assassin combo which had proved deadly for them earlier in the tournament. Bizarrely though, they allowed Aster’s Alchemist a free lane bottom for the start of the game. This move seemed completely insane, and given all the farms in the world, Song “Sccc” Chun scaled out of control. Aster’s supports stacked up camps for Sccc, and the cores set up engage. Every fight, Aster would just clean the floor with their opponents.

All Aster needed to do was wait for Gambit to break. Sccc could push to his heart’s content, and as the team pushed into Roshan, Gambit attempted a make or break engage. Although it was a perfect combo, the Alchemist survived, and the fight was loss.

Amazingly Gambit got a second chance to do their super wombo combo, and this time it worked. After ignoring an Alchemist for almost 30 minutes, it looked like Gambit could win the game with just a single insanely strong combo.

But ultimately, it was all for nothing. Aster overall was just too strong, and when they didn’t group up, Gambit’s combo wasn’t able to land. Gambit drop to the lower bracket, as Aster advances to the Grand Finals.

After our first round of playoffs, it’s a little disappointing how short the day of games was. In part, that’s because of how dominant some of these teams have looked. In particular, Team Aster has leveled up to a point where they look completely ready for the jump to a Major. Gambit and Alliance, on the other hand, seem to have some way to go.

The Lower Bracket Finals and Grand Finals of the StarLadder ImbaTV Dota 2 Minor are our final two series. In the first game Alliance will take on Gambit to decide who will be headed home in third place. The winner of this will meet Team Aster in the Grand Final, with a chance to head to the ESL One Los Angeles 2020 Major. It all kicks off on StarLadder’s Twitch channel from 12pm CET tomorrow.