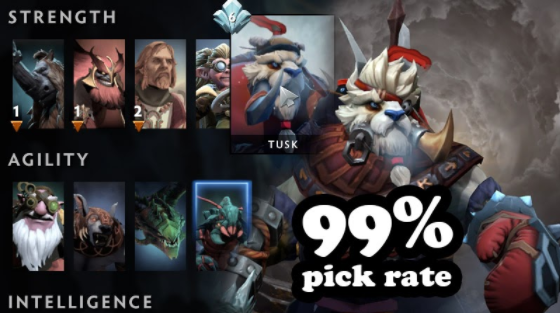 The first Aghanim Trials is done and dusted, and players seem to have already found the perfect hero comp. Valve kept track of the top 100 quickest team times to complete Aghanim’s Labyrinth, but rather surprisingly 96% of the teams achieved success with the exact same line-up of heroes. The big winner of the Trials? Tusk.

Now very early on in the trials a team on the Russian server achieved a record time of 19:47, and news of their comp spread via the downloadable replay and a YouTube video (below). The team used Winter Wyvern, Sniper and Weaver, all of which had already been very popular, but their 4th pick was a rather unusual – Tusk.

While they may not have been the original creators of the comp, the team still had the best time by the end of the first wave of Trials, and finished 4th out of the global top 100.

The quickest time to complete the labyrinth was 19 minutes and 25 seconds. Globally, just nine teams managed to defeat Aghanim in less than 20 minutes, and all nine had the exact same hero combination of Weaver, Sniper, Winter Wyvern and Tusk. 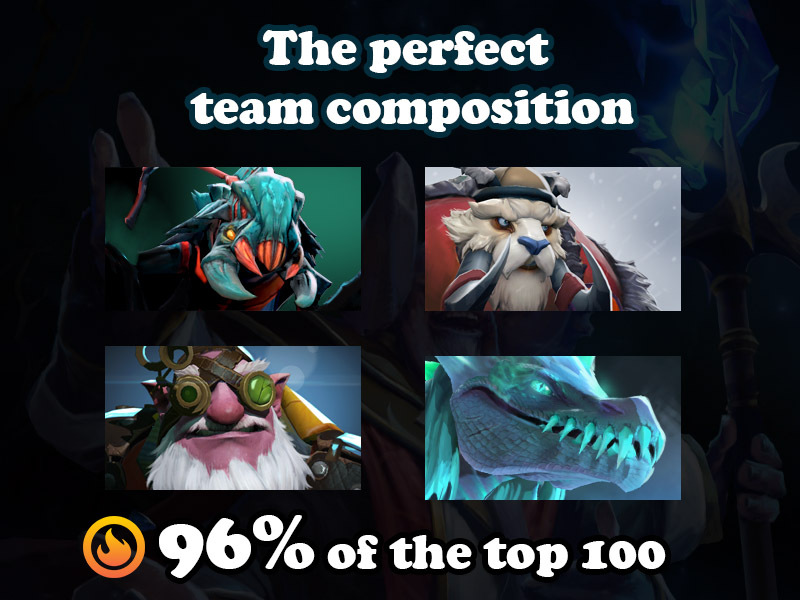 With the top 100 comps almost identical, we should expect changes very soon.

The Trials are about speed and not long drawn out fights, and the swiftest teams in the trials went for pure right click damage. Agility heroes Weaver and Sniper’s quick attack rate was frequently buffed with Mask of Madness, and their damage amplified with not one, not two but sometimes even three Daedelus. Typically, Solar Crest was bought on Tusk to reduce the armor of heavy duty targets, and ALL four heroes bought Black King Bar. Here is a quick overview of the items picked by the three quickest teams in the first global Aghanim Trials. 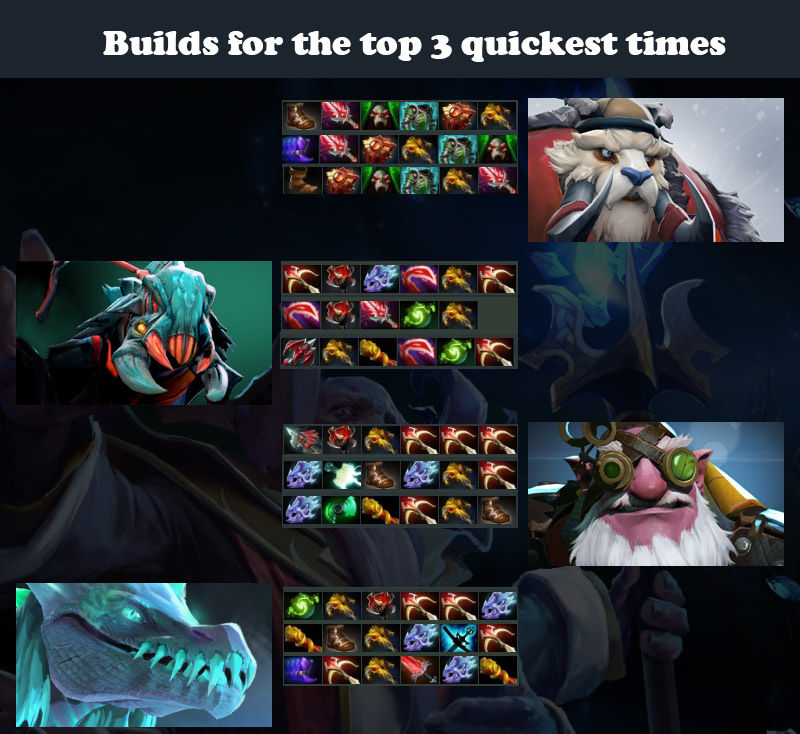 All three teams managed to finish the labyrinth in under 20 minutes.

Omniknight falls out of favor after Valve nerf

In the run-up to the Trials, the trend was for comps to feature three ranged heroes and one melee. The reason for this is that being able to kite enemies is critical in the Labyrinth, and many of the bosses such as Rizzrick the Razorsaw or Storegga the Ample have devastating close-ranged AOE abilities. As a result, Omniknight became a hot pick for his ability to “make space” by tanking damage, while also offering saves in Purification and Heavenly Grace.

Omniknight’s big selling point was his Ultimate – Guardian Angel. The cooldown could be reduced and unique buffs granted magic immunity and flight. However, Valve decided to smack Omniknight with the nerf hammer on July 17th, and with his ultimate now far less prolific, he is not the perfect tank he once was.

With Omniknight the news for the serious Aghanim Trial runners, the other four options for the solo tank role were Mars, Magnus, Ursa and Tusk. Of the four however, Tusk stands out as the real team player and here’s why. 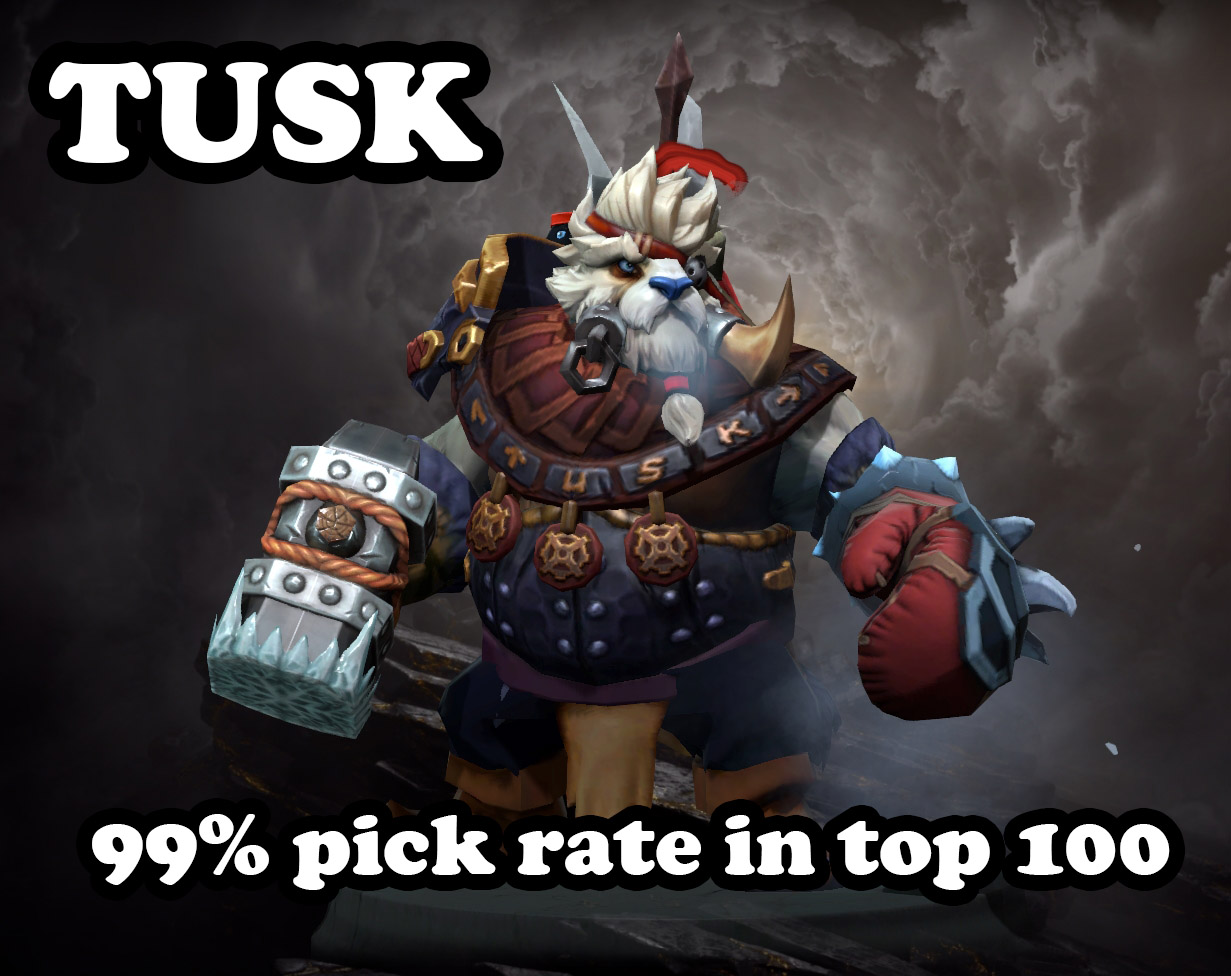 Tusk featured in 99 out of the top 100 teams in the Trials Leaderboards.

While Mars does have some juicy upgrades that significantly buff the damage output of his spears, none of his upgrades affect allies. Ursa provides even more raw damage than Mars, but outside of the upgrades for his Ultimate, Enrage, likewise does not buff or improve his team’s survivability. Magnus has the least impressive resume of the four, with underwhelming damage and perks. Empower is a nice touch, especially with the potential for 10% lifesteal, but overall Magnus is awkwardly not an out and out tank nor a good DPS dealer.

When teams running the trials began picking Tusk it raised eyebrows, but on closer inspection of the hero’s upgrades it makes perfect sense. In terms of damage Tusk’s Walrus Punch is legit, especially with the upgrade Add Another Punch that refreshes it after killing an enemy.

If we inspect the match report of the 19:40 run on DOTABUFF, we can notice that Tusk managed 25,500 healing, which is rather interesting. Even with Vladimir’s Offering in his inventory, this number doesn’t make sense as Tusk does not have any healing spells in Dota 2. However, in Aghanim’s Labyrinth the Cool Party upgrade for Tag Team grants 8% lifesteal to any ally attacking the target. Considering in this run for example, that both Sniper and Weaver had Masks of Madness, it means they could heal 28% of their damage for every strike on a Tag Team target. However, even without the Masks of Madness, 8% lifesteal on a spell that can become toggled on or off is insanely powerful.

On top of dealing high damage with Walrus Punch, boosting allied damage with Tag Team upgrades, Tusk can also save allies with Snowball. Now in a regular game of Dota 2, a Snowball save is only good if you’re in the vicinity, but in the Labyrinth the Global Cooling upgrade makes the spell have a global cast range. Wherever your ally is on the battlefield you will then be able to add them to your Snowball, and if you unlock the Snow Fort perk, you can even grant them 4% Max Health regen per second while inside.

Finally Ice Shards with its reduced cooldown and potential two second stun with Deep Freeze is great for keeping the enemy away from your DPS dealers. One reason to pick Disruptor was Kinetic Field’s ability to control the battlefield, but Ice Shards can do the job just fine, while also being upgradable to deal significantly more damage. Overall Tusk ticks all the boxes and you should expect to see a lot more of him in your Aghanim Labyrinth games.

The future of Aghanim Trials

Valve’s patch ahead of the first Trials did nerf Omniknight and Disruptor enough that they were not quasi-OP must-have hero picks. Moving forward, the general consensus seems to be that Valve should not balance the mode based on the performance of the elite, but instead keep it a fun mode. However, with six weeks of Trials left to go, they will need to spice things up. New heroes will likely be added, but for now let’s enjoy Tusky Tusk’s moment in the spotlight.

If you’re new to Aghanim’s Labyrinth and want to learn the basics, you can check out our Beginners Guide here.