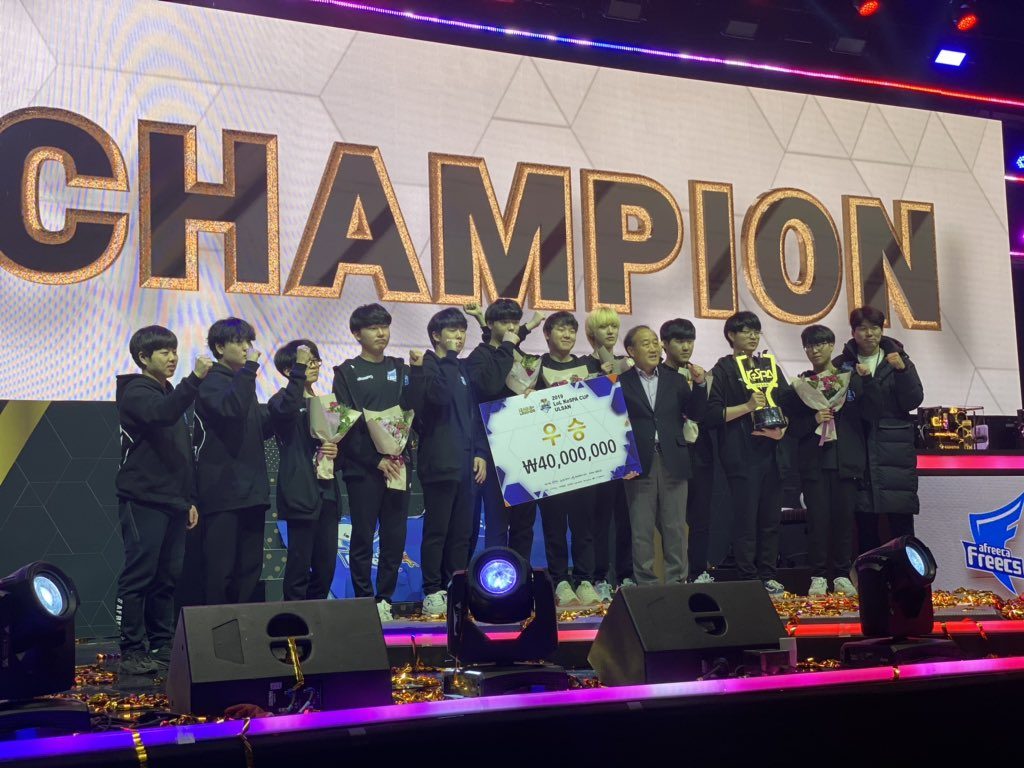 The Afreeca Freecs have started 2020 on the highest note possible. With their new roster, the Freecs have torn through the KeSPA Cup, only losing one game on their way to the trophy. Their 3-0 dismantling of SANDBOX Gaming in finals has cemented them as a top contender in the upcoming LCK Spring Split.

Afreeca’s journey through the KeSPA Cup started with them as the fifth seed. As such, they had to play in the elimination and qualifying rounds for playoffs. In their first match, the Afreeca Freecs faced a Rockhead squad from Challengers Korea. A quick and easy 2-0 victory saw the Freecs advance to the next round against Brion Blade. Once again, the CK squad couldn’t hold a candle to Afreeca, resulting in another 2-0.

Now in the playoffs, the Afreeca Freecs faced their first real test against a revamped Hanwha Life roster. While their first game was a 33-minute stomp with a 23-6 kill score, Hanwha were able to fight back in game two. Hanwha took advantage of an area-of-effect (AOE) combo team composition to even up the series. In game three, Afreeca mid laner Song “Fly” Yong-jun put on a carry performance on Orianna with the help of jungler Lee “Spirit” Da-yoon’s Qiyana. Afreeca advanced to the semifinals to play against the most hyped new LCK roster, DragonX.

This series was expected to be a close battle, but one player on Afreeca had other ideas. Top lane superstar Kim “Kiin” Gi-in put on an absolute clinic throughout entire series. Game one saw Kiin and Spirit use the Renekton and Elise combo to take over the early game. Afreeca drafted a team fight composition in game two, which Kiin’s Kennen enabled fully. Game three had Kiin destroying DragonX with a Camille split push. Kiin earned two of the three MVPs and had a combined kill-death-assist (KDA) ratio of 19-4-22.

In the Grand Finals against SANDBOX Gaming, who had just beaten the favored T1, Afreeca wanted to do more of the same. In game one, every member of Afreeca outperformed their counterparts, resulting in no towers or major objectives taken for SANDBOX and a 24-1 kill score. After this near-perfect game, Afreeca ran it back with another win. This time new bot laner Jin “Mystic” Seong-jun earned half of Afreeca’s kills on Xayah. With the Freecs on match point, both teams put their substitute mid laners in the game. While game three was the closest of the match, Kiin and Mystic were able to combine for 17 of the team’s 26 kills. The Hecarim and Sivir duo scaled into the late game and carried team fights with the only Elder Dragon needed by Afreeca in all of playoffs.

KeSPA Cup is always a sort of training ground for teams to field and adjust to their new offseason roster changes. As such, the result is often unpredictable. However, the Afreeca Freecs were one of the more unexpected possible victors. They’ve always had a true talent in the top lane, but the rest of the team would bring Kiin down. With new bot and mid laners in Mystic and Fly, it would seem that Kiin finally has the support he needs to help Afreeca win hard games.

Everyone’s eyes now turn to the LCK Spring Split, which begins sometime in February. Teams like T1, DragonX, and Gen.G have a month to fix the problems they showed in the KeSPA Cup. A new LCK squad in APK Prince will take the stage and try to compete with the best teams in the region. And the Afreeca Freecs will try and continue their dominance, earning a place at the top of LCK. The League of Legends competitive season is just getting started. Check back at Hotspawn for all the latest LoL coverage.