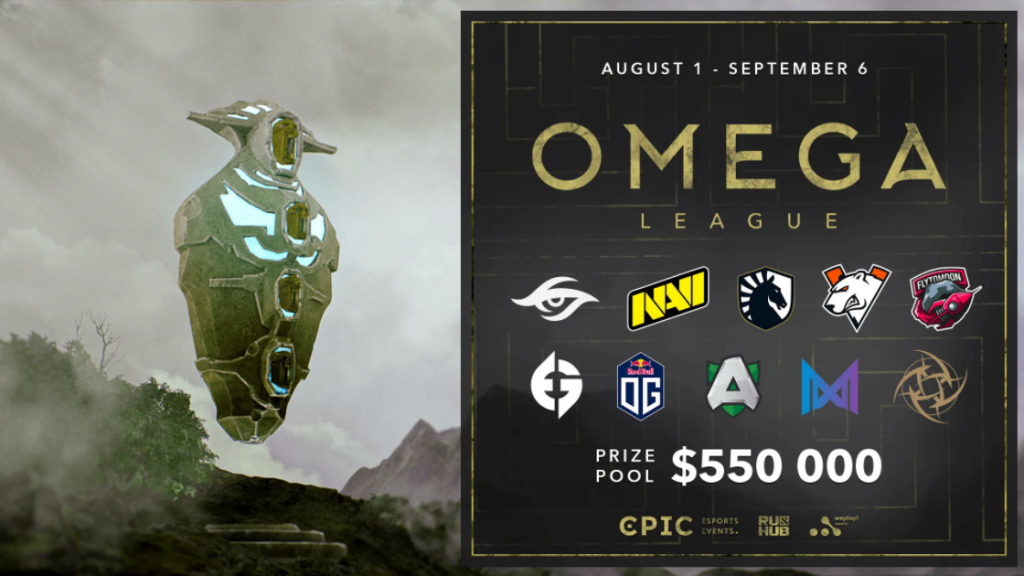 After a short break in Dota 2 online tournaments starting with the conclusion of BEYOND Epic, the scene is now ready to play the new patch in official competitive matches. A new online league with $590,000 in prize money called the OMEGA League is set to be held starting August 1st, as revealed by organizers Epic Esports Events and WePlay!. The league itself is a collaboration between the two giants in the Dota 2 scene, and it looks like it will serve the competitive space over a fairly long period.

We are very delighted to announce OMEGA League in collaboration with @epicentergg!

The event will take place during the Pushka League dates and will gather the best teams from Europe, the Americas, and Asia!

The event is scheduled to take place until September 6th, with open qualifier rounds set to start as early as July 20th. The league itself will feature teams from Europe and CIS in the European division, as well as North and South American squads in the American division. The former will have the lion’s share of the total prize pot, with a whopping $550,000 at stake there. The latter will get the remaining $40,000.

Ten marquee teams including BEYOND Epic champions Team Secret have been invited so far. Other popular fixtures like Team Nigma, Natus Vincere, Ninjas in Pyjamas, and even United States-based fan favorites Evil Geniuses will be in the mix as well. Curiously, EG have been invited to the European division, despite them typically playing from their home region of North America.

The format itself seems to be heavily inspired by the WePlay! Pushka League, the second season of which OMEGA League supposedly supersedes. Both regions are split further into two subdivisions called the Immortal and Divine divisions respectively. For Europe, the Immortal division features $500,000 in prize money, with the remaining $50,000 going to the Divine division. The American division on the other hand follows a split of $31,500 and $8,500 respectively. Both the Divine divisions have their own group stages and playoff brackets. While the former has its own prize pool, it essentially serves as a feeder series for the Immortal division.

As for the number of teams in each region, Europe will have 12 participating squads while the Americas will have 10. Given that 10 out of 12 slots in the European division have already been taken by directly invited teams, the remaining two slots will be decided through a closed qualifier tournament. America on the other hand will have four slots open to those that go through the open qualifiers.

For all the details on the OMEGA league itself, check out the announcement on the official WePlay! website.