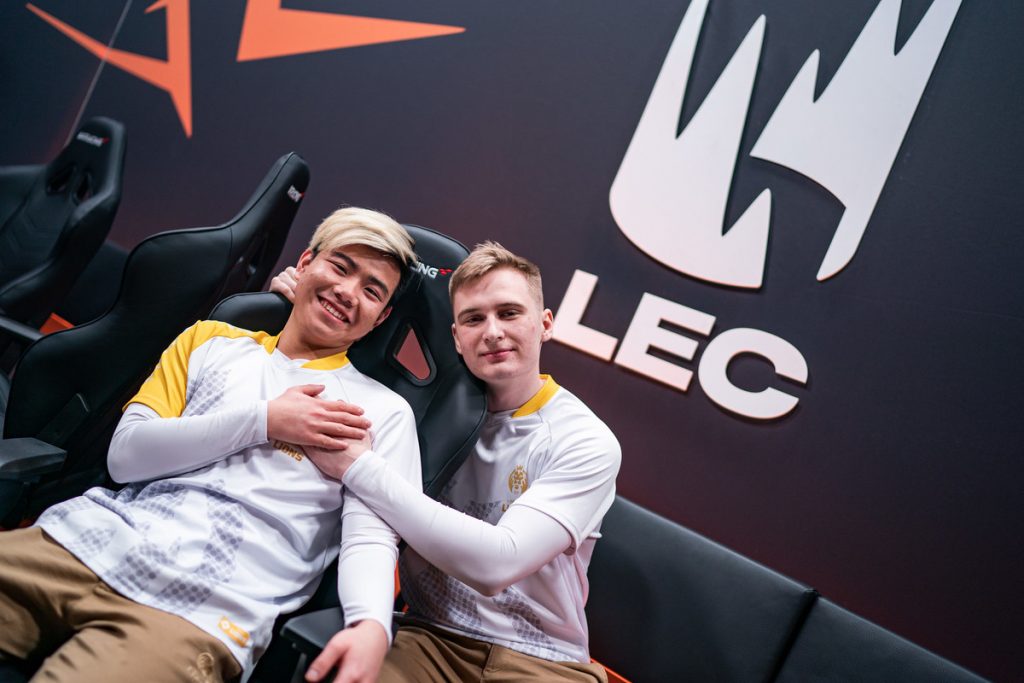 MAD Lions have ripped off four straight wins to move into a tie with Rogue for first. (Photo courtesy Michal Konkol - Riot Games)

The League of Legends European Championship (LEC) has concluded the second week of the 2020 Summer Split. MAD Lions moved into a tie for first with Rogue after a pair of impressive wins, while SK Gaming have continued to show improvement from Spring to Summer. We take a look at where things stand in the LEC by looking at the top story lines so far in Europe.

MAD Lions were a fitting opponent for G2 Esports to start up the LEC Summer Split. After all, they were the only team to beat G2 in a playoff series in the Spring, knocking them off 3-2 in Round 1. G2 would go on to win the rematch in the Semifinals, but Fnatic could not take a game off G2 in the Finals. MAD Lions played G2 closer than anyone else could in the Spring.

So, it was a disappointment when G2 Esports blew them out to open the season. Because it was the first game, MAD Lions also were in sole possession of last place to open the season. That’s not the kind of start they were hoping to get off to, regardless of their first opponent. Wins against Excel Esports and SK Gaming allowed MAD to get back over .500 and end week one on a high note. But stiff competition in 3-0 Fnatic and 2-1 Team Vitality loomed in week two.

These old Lions thinking they can step into the pit with us 😅 #goMAD #MADWIN pic.twitter.com/sZvosgg0kO

MAD Lions passed those tests with flying colors, winning both to move into a tie for first place with Rogue. Their win over Fnatic to begin the week was an impressive display of patience. MAD fell behind early, snowballing to a 4.4k gold lead for Fnatic by 23 minutes. However, MAD didn’t let Fnatic grow the lead any bigger. MAD traded farm and objectives until they found the fight that turned the game around. MAD caught Tim “Nemesis” Lipovšek’s Twisted Fate out on a flank at Elder Drake, giving MAD the numbers advantage to take the objective.

With the buff in hand, MAD secured Baron and made a game-winning push. Marek “Humanoid” Brázda’s Orianna dished out the damage and MAD took a 12 kills to six come-from-behind victory in 35 minutes.

MAD then went on to take a more dominant victory over Team Vitality. Leading all the way, MAD needed only 29 minutes to take a 25 kill to nine win. Matyáš “Carzzy” Orság’s Ezreal was the star in this one, going 11/1/6 while dealing 26.4k damage to Vitality.

While they are on top of the standings now, MAD Lions have a brutal schedule to look forward to in week three. They open against Origen before closing against Rogue in the battle for first place.

There wasn’t a ton to like about SK Gaming heading into the Summer Split. Even if they won their last two games of Spring, the team still went 4-14 overall to finish 9th in the LEC. The team then returned four out of five starters for Summer, though Janik “Jenax” Bartels switched from mid lane to top lane. That opened the door for Drik “ZaZee” Mallner to promote to join the main roster after a career of playing in the national leagues.

However, SK Gaming are looking like one of the most improved teams in the LEC through two weeks. After beating Origen in their opening game, SK Gaming took down another Spring playoff team in Misfits Gaming to open week two. Jenax’s Volibear was a terror in top lane, holding Danny “Dan Dan” Le Comte’s Wukong to a paltry 0/3/2 score with 3.1k damage dealt. ZaZee also played a great Azir into Fabian “Febiven” Diepstraten’s Akali, going 2/0/8. Beating Misfits 19 kills to three in 28 minutes is no fluke.

SK did follow that up by giving Excel Esports their first win of the season, but there were even positives in that game. Well, one positive anyway: the play of Juš “Crownshot” Marušič. SK’s ADC almost single handedly kept SK alive in the game, including a ridiculous stretch in which he kept Excel from taking their third elemental drake. Had Patrik “Patrik” Jírů not carried on a champion balanced through 200 years of combined experience, SK Gaming had a shot of sneaking that game away. Crownshot secured seven of SK’s 11 kills in the loss.

Now sitting at 3-2 through two weeks, SK Gaming are only one win away from matching their Spring record. They’ve done it by getting contributions from every role. Jenax has looked good in his debut as a top laner, Kim “Trick” Gang-yun has been jungling aggressively with stronger lanes, ZaZee is a promising rookie, and the bot lane may end up being one of the best in Europe this split.

SK Gaming will look to keep their momentum going against G2 Esports in week three. They’ll then face Team Vitality to close the week.

When FC Schalke 04 announced their week one starting lineup, Head Coach Dylan Falco acknowledged there would be some changes throughout the season. Falco said at the time: “We very much believe in having an Academy team in which we ready players for LEC, in which we have actual viable alternatives to play on our LEC roster. We spent a lot of time before the Summer Split doing tryouts for our LEC team, and I would expect to see some changes or rotation of roster throughout the split of our academy players.”

I won't be playing LEC this week.

Both botlanes are splitting practise and the best performing duo plays. Neon and Dreams played better than us this week so I hope you guys support their return to the stage.

I'll keep working on my own flaws and focus on getting back.#S04WIN https://t.co/OjAx8ElLuc

S04 were not shy about making roster changes in the Spring, either. Jungler Lukas “Lurox” Thoma was promoted to the main roster in favor of Erberk “Gilius” Demir after two weeks. ADC Nihat “Innaxe” Aliev then replaced the nomadic Konstantinos-Napoleon “FORG1VEN” Tzortziou in week four after FORG1VEN decided to step down absent more roster changes.

The duo weren’t put into a favorable spot for their Summer debut. Playing against a G2 Esports team that went just 1-2 in the opening week would be a tough matchup for anybody. Neon and Dreams acquitted themselves well, but G2 had the superior macro play to eventually win the game. A 3/1/2 Miss Fortune game for Neon against such a tough opponent made for a good first impression.

S04’s new bot lane didn’t leave quite as favorable an impression in the loss to Misfits Gaming. After playing the first 15 minutes to a draw, both bot lanes swapped to top. MSF took down S04’s turret and took advantage of S04’s slow reaction time. Instead of conceding and backing away when the turret got low, S04 tried to attack MSF’s bot lane and were punished. The duo combined to go 1/4/3 in the game.

This probably won’t be the last roster swap of the split for S04. With Excel Esports’ win over SK Gaming, S04 are the only remaining winless team in the LEC. They’ll get their best shot at changing that when they face Excel to open week three. 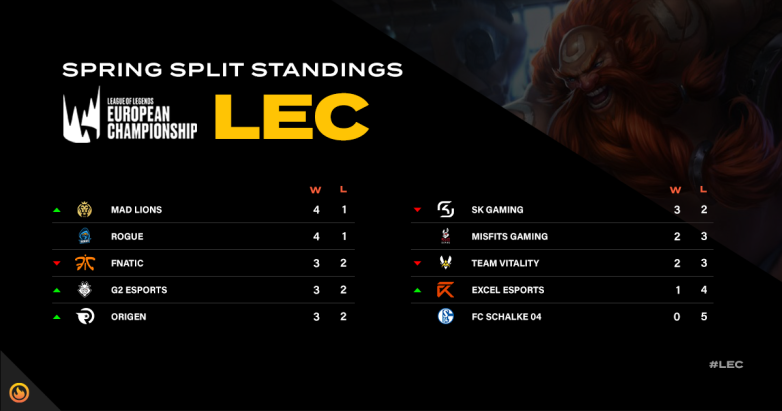 MAD Lions and Rogue make for unlikely partners at the top of the table, while the “Big Three” of Spring in Fnatic, G2 Esports, and Origen all sit at 3-2. SK Gaming is also 3-2 to round out the current teams in playoff position.

FC Schalke 04 bring up the rear as the last winless team in the league at 0-5. Team Vitality and Excel Esports are also unsurprisingly near the bottom, but Misfits Gaming can’t be happy with their 2-3 start after acquiring Kasper “Kobbe” Kobberup. The slow start may have them considering moving Petr “denyk” Haramach back to the main roster.

A battle between the two top teams after two weeks of LEC play. Both have only lost to G2 Esports in their first five games. Finn “Finn” Wiestål is coming off a poor game against Martin “Wunder” Hansen, so it will be interesting to see if Rogue want to give him a confidence boosting matchup or instead play around their bot side. Rogue get final pick on red side, so who they decide to save the final counter pick for should be telling.

They might not be the top two teams in the standings right now, but Fnatic and G2 Esports still have to be considered the two giants of the LEC. They’ll meet for the first time this season to close week two. Fnatic are coming off two losses in which Martin “Rekkles” Larsson played Soraka. Will they double down on the strategy, or will they want him on a champion with more carry potential? They’ll have a lot of flex pick options as they close champion select on red side.