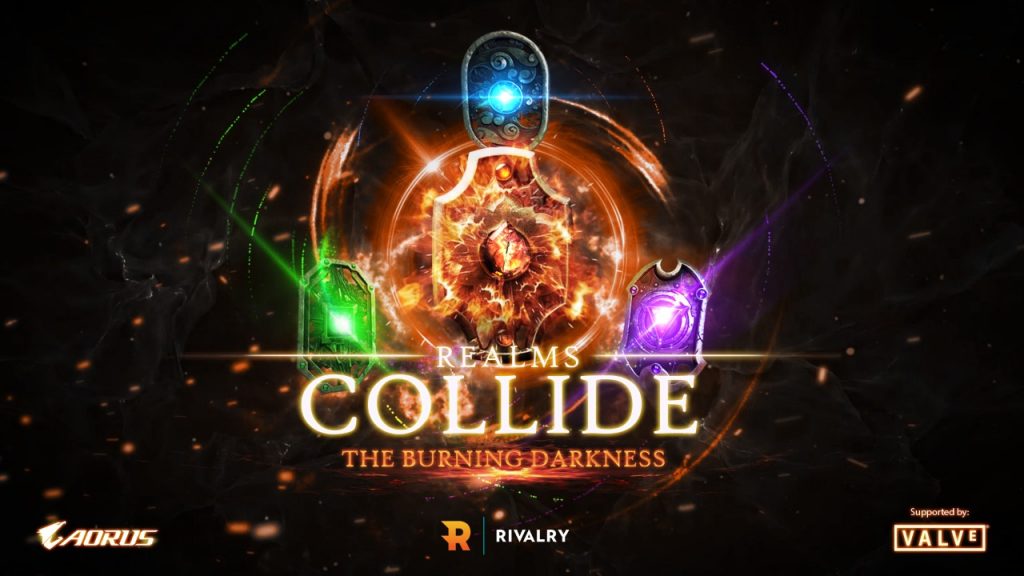 The Realms Collide event has lived up to the expectations. (Photo courtesy 4D Esports)

The group stage of Realms Collide: The Burning Darkness wrapped up on the evening of December 1st, and the action from the event matched the tournament’s hyped-up name. As the dust settled on this 12 team battle, four teams found themselves eliminated, while the likes of the table-topping 4 Zoomers and Omega Gaming headed to the playoffs.

As one of the beneficiaries of Valve’s commitment to support regional tournaments in South America, Realms Collide 2 was expected to be a high-level production. Fortunately, organizer 4D Esports has not disappointed. Although not on the level of the recent impressive European events, this was a slick presentation, with a small but talented pool of commentators for the English broadcast.

We are thrilled to share with you our announcement trailer subbed in English too! Ban Ember Spirit already smh.

BTW, we will be including more teams soon™. pic.twitter.com/IY1KsuTZvJ

Beyond the production, the most important aspect – the competition – has been fantastic. Whenever SA and NA clash, it’s exciting to see who gets the upper hand, and thankfully there’s not been a clear winner in quality. The difference between number one in the standings and number eight feels super close, with just a trio of victories separating those positions. That said, there are some clear stand-outs in both regions.

Quincy Crew, by any reasonable metric should be the kings of NA. The team has weathered the storm of EG and CR4ZY, and not disbanded despite the foundation of the region’s scene crumbling around them. At Realms Collide 2, it’s the 4 Zoomers, rather than Quincy Crew who are turning heads and winning in decisive fashion.

The 4 Zoomers have quietly gone from a joke team being trounced by the Quincy Crew at every tournament, to a legitimate threat. With the majority of the team having been together for close to eight months now, there’s some great synergy between them. It’s only right that with game having been on this patch for so long, and the team playing together for all that time, winning should eventually happen. Even a shakeup that saw Daniel “Zero” Yu take over from a departing Jaron “monkeys-forever” Clinton, couldn’t slow this team down.

Finally at Realms Collide, the Zoomers have hit their stride. Meeting Quincy Crew early in the tournament was a blessing. Clashing on November 16th meant that the team had a few tricks up their sleeve for QC. The team neutered QC’s roaming Io by having Jacob “Husky” Fifik sit mid with Nico “Gunnar” Lopez. While Io exhausted himself attempting to stabilize losing side lanes, the Ogre spent his game making a nuisance of himself. Despite the match stretching beyond 40 minutes, it was always the Zoomer’s game to lose, and they picked up the first win in the series.

With some strong initiations by our new offlaner, the Zoomers take game one against Quincy Crew in this Realms Collide group stages!

Game two will begin after a short break, some cheer us on as we look to take another 2-0! #justZOOMhttps://t.co/iDXab6l7pz

In game two, Husky, who may intentionally be trying to model his own hero pool on Clement “Puppey” Ivanov, broke out his Chen. While an avid player of the hero, he’d avoided playing much of it recently. So when the zoo was unleashed upon QC they had nothing to answer it. The team struggled and eventually lost out in a quick matchup. 4 Zoomers would go on to top the table, having defeated the team that has consistently eliminated them from events this year.

Thunder Predator comes out strong in game one, but the Zoomers bring it back in game two to even out this series 1-1.

This concludes our group stages for Realms Collide II, we've secured an upper bracket position, and we'll update you when we know our schedule #justZOOM

The Mighty Have (slightly) Fallen

There’s only been two big names in South America all year. Riding high after LAN success in 2019, beastcoast struggled to replicate that former success in online events. Instead it was Thunder Predator who swooped in and rode the lightning to tournament success. Yet as we wrap up the group stage, both these teams find themselves in the lower bracket, having struggled against the best the Americas has to offer.

Namely Omega Gaming, who 2-0’d both beastcoast and Thunder Predator in their series. The team, which may not have been in the event at all if not for catJAMMERS disbanding on November 11th, has taken their opportunity and run away with it. After starting the tournament with an unimpressive draw against Team Unknown, followed by a surprising upset of Quincy Crew, Omega looked to prove themselves against a seemingly unstoppable Thunder Predator. In a pair of decisive victories, the team bullied their opponent’s with their quickly fed carries and decisive rotations.

But the really impressive play came not from the middle or one position but from Omega’s offlaner, Oscar David “Oscar” Chavez. In both games Oscar was completely left out to dry by his team. In game one, after quickly grabbing a lead on his Bloodseeker, Oscar was left alone by his Mirana support who spent the rest of the game making sure the Viper middle was babysat. For game two, Oscar was given even less support, as Omega opted to tri lane with their two supports and Sven. Left alone in the bottom lane, Oscar limited his deaths, and made sure the Legion Commander and Dark Willow had no effect on the game.

Likewise against beastcoast on the final day of the group stage, Omega Gaming were able to put together a brutal dismantling of their opponents in game one. However, in game two things rapidly got out of Omega’s hands. As the match pushed to 40 minutes, it looked like beastcoast’s greater experience would win out. But ultimately, there was just too much gold on Omega’s carries, and beastcoast lost enough fights to find their throne demolished.

As a result, Omega sits at the top of the standings with the same match score as NA counterpart 4 Zoomers. Infamous also narrowly edged into the upper bracket, having amassed a healthy collection of 1-1 draws in their series. By drawing with some of the best teams in this event, they secured their spot in spite of not being the most polished squad. 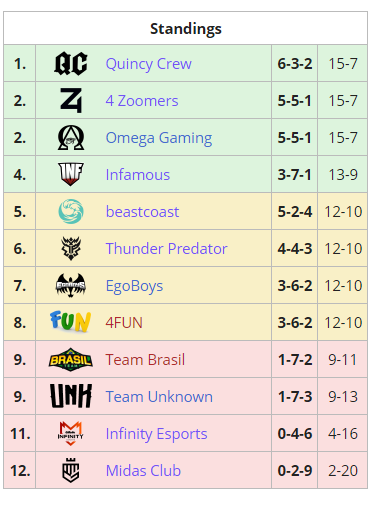 After a whirlwind group stage, it’s Team Brazil, Team Unknown, Infinity Esports, and Midas Club who are heading home, while the remaining eight teams head to the playoffs. Realms Collide:The Burning Darkness takes a break on Wednesday, December 2nd, restarting with playoff action on December 3rd. You can catch all the matches from the event on EpulzeGaming’s official Twitch channel.