322 – The Story Behind Dota 2’s Most Notorious Meme 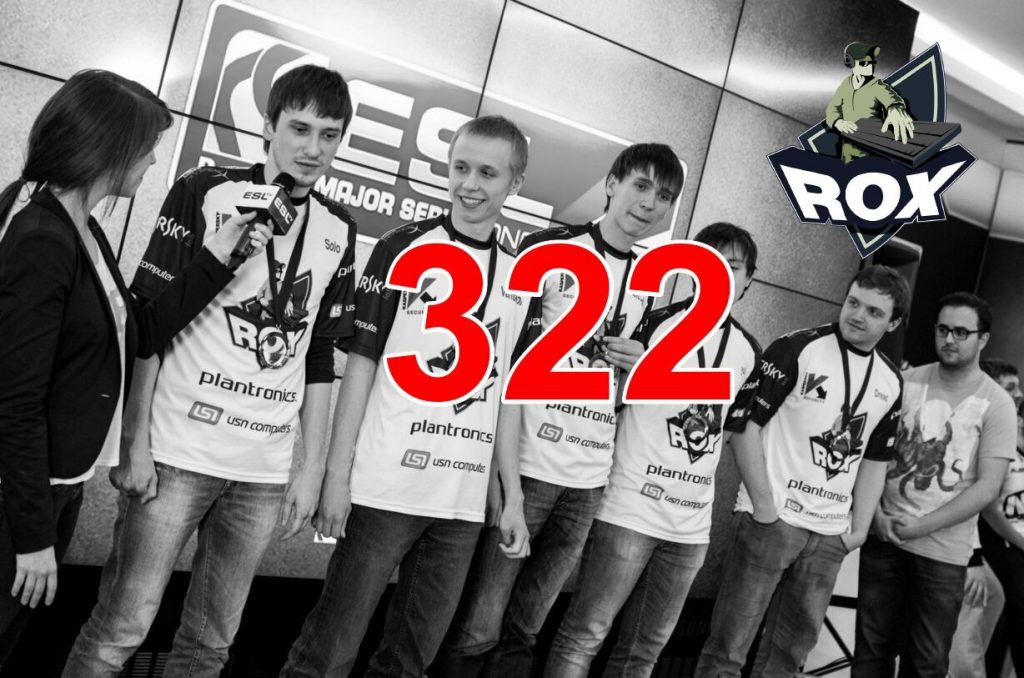 322 is the universal choking symbol in Dota 2, but where did it come from? (Photo courtesy ESL/Raid Call)

Cast your eyes over to Twitch chat in any competitive Dota game, and you’re likely to see a trio of numbers being spammed. Whenever a team throws or makes a big mistake, the chat springs to life with “322″. If the game swings back the other direction it’s “644,” a double throw. Even rarer, is the triple throw, and suddenly the elusive “966” hits the logs.

Man Competative Dota twitch chat is nothing but people spoiling scores, calling each other "insert team that's losing bettor idiot" etc, and saying every move is 322 this shit is so annoying.

322 is the universal sign that someone threw a game in Dota. Unintentional or otherwise, if a player makes a mistake that could lose them a match, 322 is the go-to meme to spam. But how did this innocuous number become one of the most recognizable symbols of messing-up in Dota 2?

The story begins with current Virtus.pro team captain, and long time Dota 2 pro, Alexey “Solo” Berenzin. In 2013, Solo, along with teammates Stanislav “BzzIsPerfect” Glushan, Vladimir “Yol” Basov, Andrey “Dread” Golubev, and Ivan “Vanskor” Skorokhod were part of RoX. The CIS Dota 2 team had started as a StarCraft: Brood War clan, with full name translating roughly to Russian Society of Cybersport. The squad had enjoyed a reasonable amount of success, placing well in a series of tier three tournaments leading up to an appearance at StarLadder StarSeries Season 6.

After a reasonable showing through the start of the league, RoX, at the time known as RoX.KIS, had earned a reasonable berth, and could have reasonably expected to make the playoffs. But as the days went on, the team found themselves in a tie for points with several other teams, and by the final day of league competition, were firmly out of the running.

This left the team with a single, throw away game against zRAGE, a tier three team with an uninspiring 3-11 scoreline heading into the match. What’s more, zRage were already playing with a pair of stand-ins, with just three of their active roster currently playing. With nothing on the line, and little to play for but pride, it was expected that the superior RoX.Kis team would easily sweep zRAGE.

However, a funny thing happened. Ten minutes in, the score was roughly even. RoX.Kis still looked like the favorites to win, given their greater talent. But from there, The RoX.Kis side seemed to make dozens of mistakes.

They made poor engages against a team with a dangerous Io pick (that though recently nerfed at the time, was still incredibly potent). Buybacks frequently became die-backs. At one point it seemed like RoX.Kis players, including BzzIsPerfect and Dread, were simply teleporting into already lost team fights just to die again. In a just-under 28 minute game, RoX.Kis gave up 50 deaths, ending the game an appalling 50-22 score. zRage had won, and under very confusing circumstances.

After the game, StarLadder almost immediately began an investigation. It was quickly revealed that Solo had allegedly used his then girlfriend’s account on a gambling site to place a bet against his own team. Putting down a wager of $100 at 3.22 odds, the return for his team’s loss would be $322. Solo had seemingly sold out the team for a relatively small amount of money.

On June 16th, 2013, a few days after the match, StarLadder banned Solo from all competition for life. The rest of the RoX.Kis roster, including stand-in “dnq,” received three year bans. Vanskor was the only RoX.Kis member to escape punishment, having not participated in the game. The organization was banned from StarLadder events of all kinds for one year.

This incredibly harsh punishment was partially due to the uncertainty around the allegations. While there was reportedly evidence against Solo, it didn’t explain how badly other members of the team, including BzzIsPerfect and Dread, had been playing during the game. What’s more, after admitting his involvement to RoX.Kis, Solo was removed from the team on June 21st.

In a written statement, Solo apologized, explaining that he’d kept the bet secret from the other members of his team. An accompanying statement from Dennis “PODOX” Pestretzoff explained that Solo had used his in-game leadership position to manipulate the outcome of the game. However, many in the community questioned whether this was an attempt to set up Solo as a scapegoat, to protect the rest of the team. Further to this, after Solo’s admission, the ban on RoX.Kis was removed, and all players other than Solo were free to participate in StarLadder events. By June 23rd, 2013, StarLadder also reduced Solo’s ban to just a single year.

We don't know about all the players who chose "having a reliable source of income" over Dota 2. We don't know how many of them would have been greats. What we do know is that the captain of the current #1 team in the world could have been banned for life over $322.

At the same time, the phrase “322” was becoming used more and more by the Dota 2 community. Casters, fans, and players frequently used the number as a way to describe a ridiculously bad play, one so bad that the person doing it must have been deliberately throwing the game.

By 2014, commentators had begun using it as a by-word for throwing the game, and Twitch chat wasn’t too far behind. Perhaps because prize pools for Dota 2 were so high compared to the money bet by Solo (if RoX had made it to playoffs, the team would have won $1500 minimum), the meme stuck. The sheer ridiculousness of getting a potential lifetime ban for just $322 stuck with people.

Since his removal from RoX.Kis, Solo has risen to become one of the top players in the entirety of the CIS region. He hasn’t let a single event in his competitive career divide him, and instead, dedicated himself to his performance. After rejoining RoX in 2014, he moved on to Team Empire, winning a number of tournaments with the squad. From there it was onto Vega Squadron, during one of that team’s most competitive runs, culminating in a dramatic victory over Team Secret at ESL One New York 2015. Since 2016, Solo’s home has been as captain of Virtus.pro who remain one of the top teams in CIS.

So when you see people spamming 322, even in Solo’s games, it’s less likely to be in reference to the player’s past misdeeds. Instead, it’s a knowing nod to how ridiculous esports can be sometimes, and how one player almost had his entire career taken away over $322.