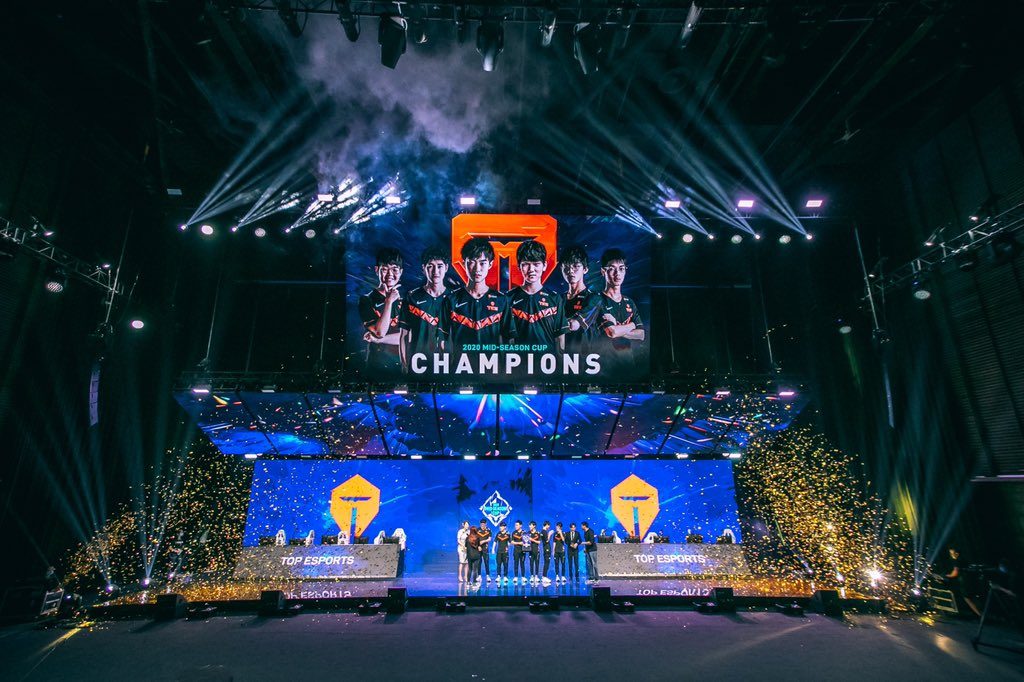 The 2020 League of Legends Pro League (LPL) Summer Split is just about to start. With another international victory at the Mid-Season Cup under their belts, the LPL is undoubtedly the best pro region in the world. We look at the notable roster changes and where the teams stack up heading into the final split of the year.

Top Esports may have lost to JD Gaming in the Spring Split Finals, but their dominant performance at the Mid-Season Cup earns them the top spot heading into the Summer Split. It’s really splitting hairs at the top, but Top Esports have shown the best recent performance. The team has been getting better and better the longer Yu “JackeyLove” Wen-Bo has been with the team and they have no real holes on the team. If Top get the Liang “yuyanjia” Jia-Yuan that showed up in the MSC Finals against FunPlus Phoenix, Top Esports could win their first domestic title. Mid laner Zhuo “knight” Ding has to be considered the best player in the world right now.

JD Gaming are coming off a Spring Split in which they never lost a series with top laner Zhang “Zoom” Xing-Ran, but a lackluster performance at the MSC has dropped them down to number two. Zoom and Spring Split MVP Seo “Kanavi” Jin-hyeok are the most feared top-jungle combination in the world. The question for JDG will remain about whether Zeng “Yagao” Qi can continue to match up against the LPL’s top mid laners in the big moments. He showed he was good enough in Spring, but inconsistency plagued him in 2019. Lee “LokeN” Dong-wook and Zuo “LvMao” Ming-Hao are as rock solid as they come bot lane.

The reigning World Champions are definitely one of the top threats in the league, but they haven’t put together a consistent run so far in 2020. The team got off to a slow start with Kim “Khan” Dong-ha, but they may have finally figured out his integration at the end of their MSC run. Despite their dominant World Championship win, FPX was never the type of team to dominate in lane or out-mechanic other teams. If Khan can fit in as well as Kim “GimGoon” Han-saem did, FPX will only be better than their 2019 team.

This ranking is giving a lot more respect to Invictus Gaming’s 14-2 regular season run during the Spring than anything that happened in the postseason. Invictus Gaming lost to Top Esports in the semifinals of the playoffs, got swept by FunPlus Phoenix in the third place game, and then went 0-3 in the group stage of the MSC. iG then allowed Lu “Leyan” Jue to leave for Vici Gaming, leaving Gao “Ning” Zhen-Ning to be the sole jungler. Ning has been a weak spot since his World Finals MVP in 2018. Star top laner Kang “TheShy” Seung-lok also had a very poor end to Spring. Still, iG has the talent and experience to beat anyone.

Jian “Uzi” Zi-Hao is gone, but Royal Never Give Up should be better in the Summer than in the Spring. He “705” Yu-Long will take over for Xie “Langx” Zhen-Ying top lane, but the big acquisition for RNG was former eStar mid laner Yuan “Cryin” Cheng-Wei. Cryin was developed by RNG’s academy team and will give the main roster a needed threat mid lane. He could form a great long-term tandem with jungler Li “XLB” Xiao-Long. Lu “Betty” Yu-Hung should continue to do a good enough job in Uzi’s former role to keep RNG a contender.

EDward Gaming had a quietly good Spring Split. Despite losing jungler Zhao “Jiejie” Li-Jie and top laner Lim “Jinoo” Jin-woo for a stretch, EDG managed to go 9-7 in the regular season and won their Round 1 playoff match against Royal Never Give Up. EDG then took a game off FunPlus Phoenix in their quarterfinal loss. EDG returns the same lineup and have called up ADC Wu “BBD” Ling-Feng (not to be confused with Gen.G’s Bdd) to share the spot with Wang “Hope” Jie. There are many elite mid laners in the LPL, but Lee “Scout” Ye-chan still has to be considered one of the best.

Team WE had a very similar Spring Split to EDward Gaming. Expectations were tempered after losing Jin “Mystic” Seong-jun and Su “xiye” Jan-Wei in the off-season, but Park “Morgan” Gi-tae’s addition in the top lane added much needed firepower. He was supposed to team up with fellow import Bae “Flex” Ho-young to carry the team, but Jiang “Teacherma” Chen’s roaming style allowed him to take over the role and support Morgan. Team WE upset eStar in Round 1 of the Spring playoffs before taking a game off Top Esports in the quarterfinals. They should remain a playoff threat.

The biggest riser from Spring to Summer has to be LGD Gaming. After finishing in 15th place with a 5-11 record, LGD add Langx, xiye, and Ling “Mark” Xu to potentially revamp over half of their starting lineup. Only xiye of those three seems guaranteed to start, but the depth and talent of LGD took a major boost with their additions. Korean imports Han “Peanut” Wang-ho and Ha “Kramer” Jong-hun will have plenty of help this split. Hyped LGD rosters have failed time after time, but the talent on this team is definitely more indicative of a playoff team than a bottom dweller.

Vici Gaming finished the Spring Split in ninth place and open the Summer power rankings in the same spot. Head coach Kim “kkOma” Jeong-gyun’s impact was noticeable in his first split with the team. After winning four matches across two splits in 2019, Vici Gaming almost doubled that total in the Spring Split with a 7-9 record. Vici Gaming are the beneficiaries of iG’s bizarre decision to ship off Leyan. He will compete with Li “Aix” Yang for the starting role after Lee “Chieftain” Jae-yub’s departure from the team. Vici Gaming also still have one import slot available if they want to use it down the line.

eStar had one of the most impressive debuts in LPL history, coming out of the gate with big wins over FunPlus Phoenix and Invictus Gaming to establish themselves. Unfortunately, their star faded to close the season. A 2-4 regular season finish was capped by a 3-1 Round 1 playoff defeat to Team WE. But the real reason eStar dropped so far is their loss of Cryin to Royal Never Give Up. Cryin and Zhang “Wink” Rui were stars in their debut split. Now Huang “Fenfen” Chen takes over the starting role after sitting behind Hu “Yuuki” Hao-Ming on LGD Gaming — who was seemingly just replaced by xiye. That downgrade cannot be ignored.

Despite losing Lee “Kuro” Seo-haeng in the off-season, Bilibili Gaming expected Chu “FoFo” Chun-Lan’s addition to keep them among the top teams in the LPL. Unfortunately, he and Zeng “Meteor” Guo-Hao didn’t mesh as well as hoped, and BLG really fell off after returning from the Coronavirus hiatus. Meteor, FoFo, and Hwang “Kingen” Seong-hoon have plenty of skill, but BLG are definitely missing Kuro’s unifying presence. They will need to find a team leader to get them back on track in Summer.

Oh My God were another one of the teams that was only a match win away from making the playoffs. They return the same lineup from the Spring Split that started all 38 games together. Had OMG won any of their final four regular season matches, we could be hyping them up as a dark horse contender after a playoff run. That speaks to how deep the LPL is as a region, but don’t think of OMG as a bottom tier team just because of this ranking. The additions of Yang “H4cker” Zhi-Hao and Han “Smlz” Jin this off-season have definitely paid off in turning around OMG after a 2-13 2019 Summer.

Yet another team that finished within one match of a playoff berth in Spring finds itself buried in the depth of the LPL. Rogue Warriors overcame the shocking loss of their starting jungler Wang “WeiYan” Xiang after it was revealed that he was involved in match fixing. Chen “Haro” Wen-Lin took over the role for the remainder of the season. RW were 3-5 at the time of WeiYan’s suspension and finished out the regular season with a 4-4 record. Rogue Warriors have added former Vici Gaming jungler Zeng “Youdang” Xian-Xin from EDG’s Youth Team to compete with Haro for the spot in Summer.

Dominus Esports drop only a couple spots from their 14th place finish in Spring, but they should be considerably weaker in Summer. Arguably their top three Spring performers in xiye, Mark and ADC Chen “GALA” Wei have all departed. In their place are Huang “Twila” Ting-Wei, Wang “Helper” Huan-Wei, and Lu “Mitsuki” Jia-Lun. Dominus Esports appear to have shifted their focus to 2021 and beyond.

Last and certainly least is Victory Five. V5 are coming off a winless season that was easily the worst in LPL history. They won four fewer games (one) than the 16th place team won matches. To their credit, V5 have added six new players to their main roster for Spring in top laner Yu “Biubiu” Lei-Xin, Weiwei, jungler Chang “ping” Ping, Korean import ADC Lee “SamD” Jae-hoon, and supports Guo “ppgod” Peng and Zhang “ZYF” Yi-Fan. Securing the team’s first match win of 2020 will be the goal.

The LPL Summer Split kicks off with week one on Friday, June 5th. EDward Gaming will take on Team WE in the opening match, followed by LNG Esports versus Suning.