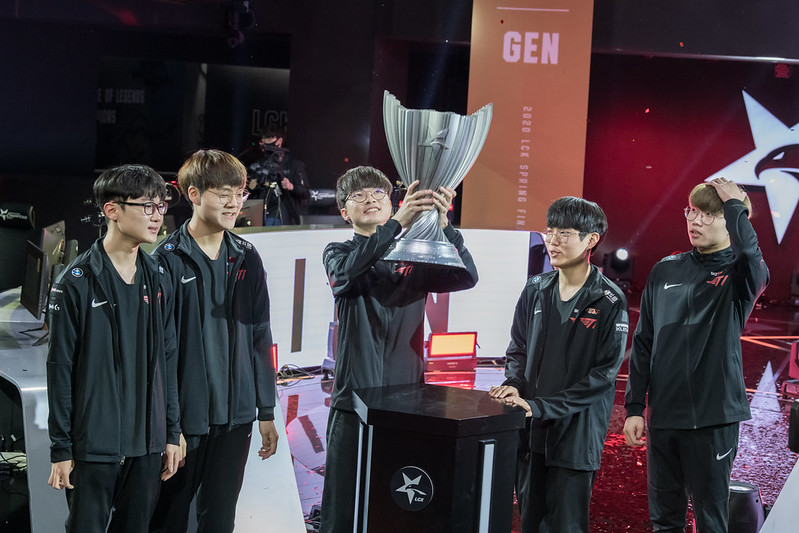 The 2020 League Champions Korea (LCK) Summer Split is just around the corner. All 10 teams, including the newly promoted Team Dynamics, get a fresh start in their pursuit of a world championship berth. T1 will open the season as the heavy favorite after winning the Spring Split title, but who has the best chance of knocking them off? We look at the notable roster changes and where the teams stack up heading into the final split of the year.

Winners of the last three LCK titles, T1 are the clear favorites heading into the Summer Split. Even if they lost in the group stage of the Mid-Season Cup, they still swept Gen.G in convincing fashion in the Spring Finals. Kim “Canna” Chang-dong’s rapid development into one of the better top laners in the LCK has made T1’s off-season transition away from Kim “Khan” Dong-ha seamless. It’s also important to remember that there were questions of how T1 would do without Kim “kkOma” Jeong-gyun for the first time. Fortunately, new head coach Kim “Kim” Jeong-soo stepped in and kept the machine running smoothly. Something to keep an eye on: T1 have promoted 16-year-old mid laner Lee “Clozer” Ju-hyeon to the main roster and have signed him through the end of 2022. Could he be Lee “Faker” Sang-hyeok’s eventual replacement?

Gen.G actually fared better than T1 at the Mid-Season Cup, taking games off both JD Gaming and Invictus Gaming in the group stage to advance to the semifinals. Unfortunately, their second consecutive tournament run was ended in a sweep, this time by the hands of eventual winners Top Esports. Gen.G revamped most of their starting lineup this off-season, so it’s not surprising to see them behind T1 as they still attempt to jell as a team. Mid laner Gwak “Bdd” Bo-seong held up his end of the bargain, winning LCK Spring Split MVP. Gen.G will need more from their top side in top laner Kim “Rascal” Kwang-hee and former T1 jungler Kim “Clid” Tae-min to unseat T1 this split.

DragonX came so close to advancing from the Mid-Season Cup group stage, but they lost three consecutive games after starting 2-0. They are in a tier of their own in the LCK — not quite on the level of T1 or Gen.G, but much better than any of the teams below them. Jeong “Chovy” Ji-hoon had a fantastic split in his first season away from Griffin, vying for MVP with Bdd and Faker. Rookie support Rui “Keria” Min-seok already has to be considered one of the best supports in the LCK to go alongside star ADC Kim “Deft” Hyuk-kyu. So like Gen.G, DRX will need more from their top side. The spotlight will be on top laner Choi “Doran” Heyon-joon and rookie jungler Hong “Pyosik” Chang-hyeon to take a step forward in the Summer

DAMWON Gaming get the slight edge over KT Rolster for beating them in Round 1 of the Spring playoffs. They then went 1-2 in the group stage of the Mid-Season Cup, but their one win prevented T1 from moving on to the semifinals. DWG are the type of team that could finish anywhere in the standings without it being shocking. Their inconsistency makes them the highest variance team in the league. They can survive poor drafts and questionable decision making by raw mechanics, but those only get you so far against the best teams and still leave you vulnerable against the worst. If they can regain the form they had at the end of 2019 Summer, they could challenge for the title. If they play like they did in Spring, they could miss the playoffs completely.

After a slow start to the season, nobody entered the playoffs hotter than KT Rolster. They promptly lost in the first round to DAMWON Gaming, but they were a team that clearly got better from start to finish in Spring. That makes it all the more interesting that they’ve brought back two franchise legends in top laner Song “Smeb” Kyung-ho and mid laner Son “Ucal” Woo-hyeon. Both were free agents, so it isn’t like KT Rolster sought them out from another organization, but it could mean that KT’s management thinks the Spring squad hit their ceiling. Whether by choice or by lack of options, KT played the majority of Spring with the same starting lineup. We could see more mixing and matching this split.

Hanwha Life have fallen on harder times after being known as the playoff gatekeepers in the LCK. They debuted in 2018 Summer and finished sixth in their first two splits. Ninth and eighth place finishes have seen them drop farther down the pecking order, but HLE should be the most improved team heading into Summer. That’s thanks solely to their signing of former Griffin ADC Park “Viper” Do-hyeon. He will reunite with long-time running mate Son “Lehends” Si-woo to form one of the better bot lanes in the LCK. Considering HLE ran a converted support in Oh “Vsta” Hyo-seong as their ADC for most of the Spring, Viper’s acquisition represents a huge upgrade to a team that could now push for a playoff spot.

Expectations for Afreeca Freecs soared after they dominated the 2020 KeSPA Cup. Kim “Kiin” Gi-in looked like he might be the best top laner in Korea, the team added star ADC Jin “Mystic” Seong-jun, and Song “Fly” Yong-jun was supposed to be the perfect complementary roaming mid laner to augment their side lane carries. Unfortunately, that didn’t carry over to the Spring Split. Fly was generally ineffective and was replaced by Kim “ALL IN” Tae-yang to end the season. Neither Lee “Dread” Jin-hyeok nor Lee “Spirit” Da-yoon seized the jungle role. Kiin and Mystic also did not rise to the level of the elite in their role in the LCK. Afreeca Freecs are solid, but their ceiling might be lower than expected.

Team Dynamics are one of the harder teams to place. They went only 9-5 during the CK Spring Split, but won the playoff bracket and then swept both series against SANDBOX Gaming and Seorabeol Gaming to promote to the LCK. Are they a solid but unspectacular team that got hot at the right time? Or did they build synergy after their slow start to become a team dangerous enough to make noise in the LCK? Their players have experience on LCK teams, so the move to the big stage shouldn’t overwhelm them. That should be especially true of top laner Lee “Rich” Jae-won. Rich was the Faker of Heroes of the Storm before transitioning to League of Legends. Team Dynamics already showed they were better than SBX. How many other LCK teams could they pass?

Formerly known as APK Prince, SeolHaeOne Prince performed better than expected in the Spring Split to avoid the promotion tournament. Their year got off to a really rocky start when they lost to a CK team in the opening round of the KeSPA Cup, but they improved enough to avoid the bottom of the league. SHO added mid laner Son “Mickey” Young-min back to the organization to compete with Kim “Keine” Joon-cheol for the starting role. It’s hard to see how SHO compete for a playoff spot this split, but they shouldn’t be considered the pushover we thought they would be when they entered the LCK.

SANDBOX Gaming bring up the rear after holding on in the promotion series to keep their LCK spot. SBX got swept by Team Dynamics before eliminating both Griffin and Seorabeol Gaming from contention. Besides adding former Griffin support Jeong “Kabbie” Sang-hyeon, SBX’s big move was to make Jakob “YamatoCannon” Mebdi the first Western head coach in LCK history. YamatoCannon will have his hands full in juggling a 10-man roster and dealing with a language barrier. While there is plenty of talent on the roster, it may take more than one split for SBX to get back to the team cohesion that saw them make the playoffs twice in 2019.

The LCK Summer Split kicks off with week one on Wednesday, June 17th. Afreeca Freecs will take on SANDBOX Gaming in the opener, followed by DragonX versus the defending champions T1.