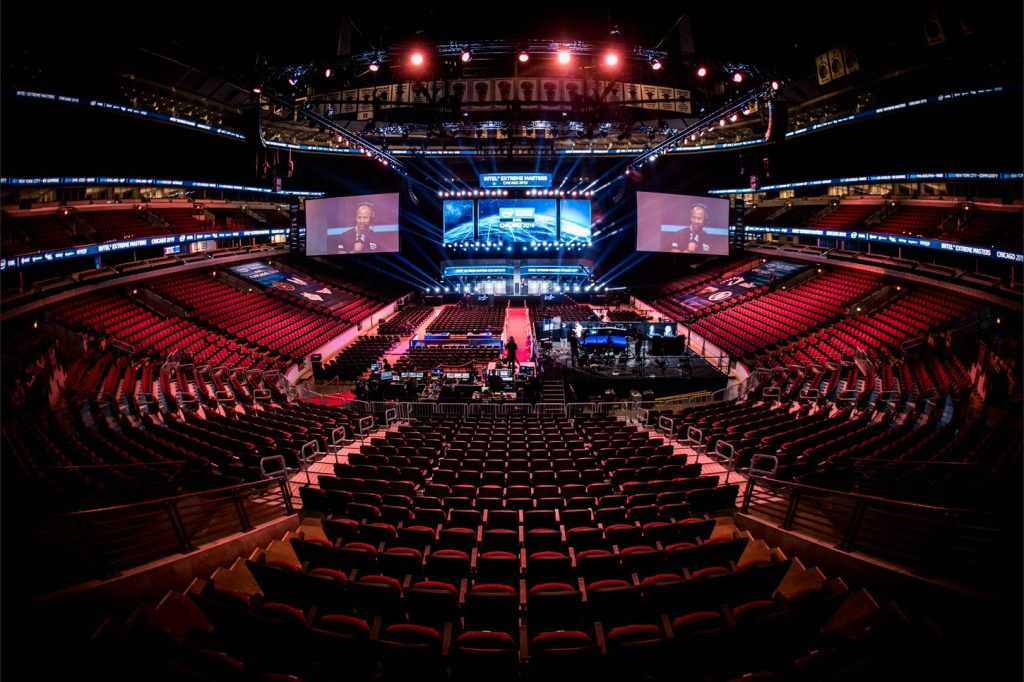 Counter-Strike’s ongoing online era has been a chaotic ride with much more to come. (Photo courtesy ESL)

Counter-Strike: Global Offensive has certainly had an interesting 2020 so far. Thanks to worldwide travel restrictions stemming from COVID-19, the CS:GO scene has entered a new mini online era. Beginning with ESL Pro League Season 11, all LAN events have been cancelled. In their place, tournament organizers have committed to regional online versions of their planned events.

This shift has resulted in a great variance when it comes to which teams are actually winning. Many usual favorites such as Astralis have seen a great decline since online play started. Conversely, there have been many big tournament wins by unexpected squads like BIG and Complexity. HLTV’s worldwide rankings reflect this. Four teams have held the number one spot in the past four months.

Individual team standings aside, the CS:GO event structure as a whole has also been greatly affected. Most notably, the ESL One Rio Major was moved from May to November, taking the place of the Fall Major. This move came with a doubling of the prize pool, but the fact remains that there will only be one Major in the year for the first time since 2013.

Valve took this opportunity to change how teams qualify for CS:GO Majors. Starting in April, the RMR (Regional Major Rankings) points system was introduced. The goal was to reward teams who placed consistently well across the entire year while still taking recent success into account.

Previously, the top eight teams from the preceding Major automatically qualified for the following one as “Legends” who would start in the top 16. The next six teams were granted the title of “Challenger” and also qualified for the next Major, but would have to start in the top 24. The final 10 Challenger spots were allotted to the winners of the various regional Minor tournaments.

Now, all CS:GO Major qualification spots will be decided by RMR points. Instead of giving direct qualification, the previous Major now only gives a small amount of points to teams who placed top 16. Each region has been given a certain number of Legend, Challenger, and Contender spots based on their worldwide performance. The breakdown for the Rio Major is:

Besides the method of qualifying for the Major, the format of the tournament will be exactly the same as before.

The plan to host three RMR events for teams to earn points towards Major qualification is well under way. ESL One Road to Rio and cs_summit 6/WePlay! Clutch Island have already been played, leaving just one more chance for teams to earn RMR points. 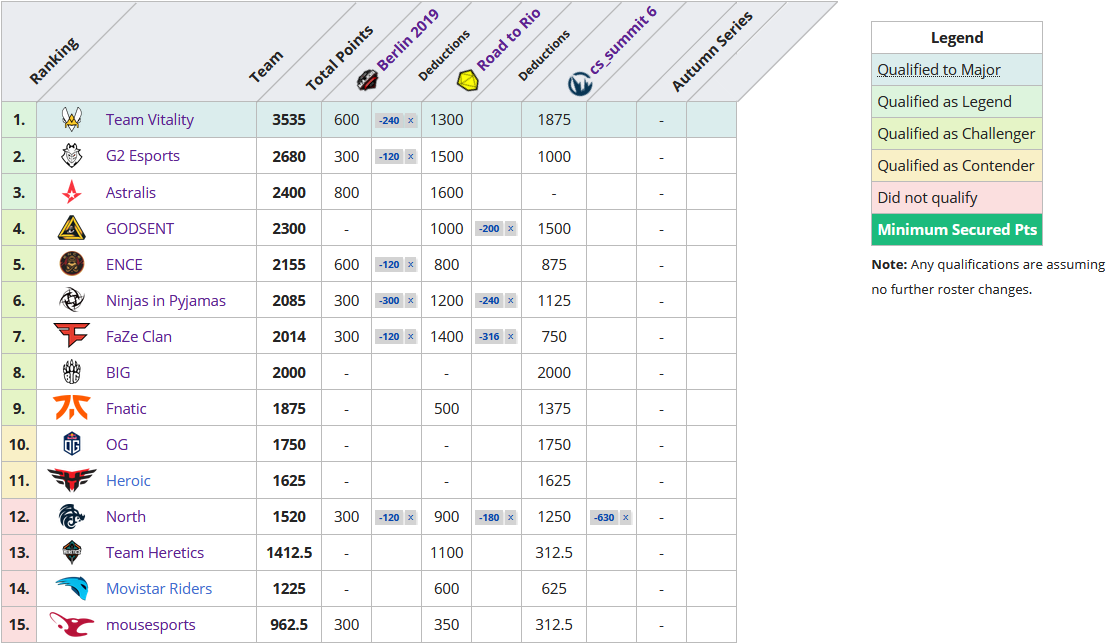 Over in Europe, Team Vitality is the only team to officially qualify for the Rio Major so far. While they haven’t won either event, they placed in the top four in both. This consistency has them in the lead by nearly 1000 points. It would take a colossal failure at the final RMR event to cost them their Legend qualification spot.

Below them in the final two Legend spots are G2 Esports and Astralis. These two teams placed second and first at Road to Rio respectively. G2 went on to place in 9th at cs_summit 6, while Astralis opted not to play while they rebuilt their roster. The only thing keeping them in the top three is their 800 points from winning the Berlin Major last year.

Hot on their heels are five teams between the 2000 to 2300 point range. GODSENT are particularly interesting, as they’ve placed 7th and 5th so far and have no points from Berlin, but are in fourth place in total points. ENCE, NiP, and FaZe Clan have had their share of success and failure. FaZe earned the highest finish among them at 3rd, then followed it directly by an 11th. BIG recently took the CS:GO scene by storm with their win at cs_summit 6. The fact that they have only earned points at one event and are still in a Challenger qualification spot speaks as to how recent form will still be incredibly important.

Although the third RMR event has not been announced yet, we already know the point totals up for grabs. A cool 2500 prize for first place will guarantee almost any team a top three finish. Even 10th place will net a team almost 1100 points. The current cutoff for Major qualification is Heroic at 1625, making this race open to all participants. 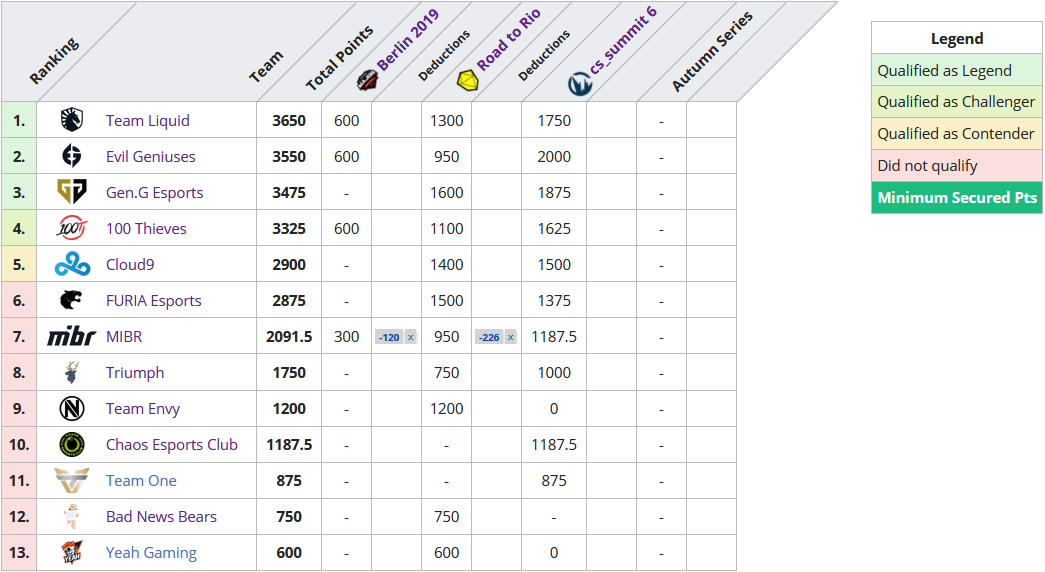 The North American race is much more cut and dried. Whereas Europe has 11 total spots at the Major, NA only has five, three being Legend spots. The top six teams have between 3650 and 2875 points. After that the drop off is a steep ~800. Even if one of those top six slips, it would take a fantastic run from a massive underdog to thoroughly upend the rankings.

The real conversation will be over which of the favorites take the Legend spots, and who will be the one team left at home. Much like Vitality, Team Liquid hasn’t won an RMR event, but has placed well at both. Evil Geniuses and Gen.G won cs_summit 6 and Road to Rio respectively, putting them in the final two Legend spots for now. 100 Thieves, Cloud9, and FURIA could all easily pull ahead into a top three finish at the final RMR event.

The CIS regional rankings look very similar to NA’s at first glance. The top five teams are all within 700 points of each other. Team Spirit and Na’Vi have both won an RMR event, but Spirit did much better in the one they didn’t win. Virtus.pro is right behind them, but CIS only has the two Legend spots. They will need to outperform one of the leaders to take their place. Nemiga Gaming and Hard Legion have performed valiantly and are hopefuls for the Contender spots.

Still, CIS is a very chaotic region as evidenced by Na’Vi’s 8th place finish at Road to Rio. Any of the middling teams could come out swinging and steal a large amount of points. Watch for Gambit Youngsters and ESPADA to continue their recent rise in the standings.

While the Rio Major is the one big prize on everyone’s mind this year, there are still plenty of important Counter-Strike tournaments surrounding it with the prize pools to match. These events are not part of the RMR points system for Major qualification, but carry a significant amount of prestige themselves.

Aside from the Major qualification circuit, there are a few other CS:GO circuits to keep your eyes on. ESL One Cologne is the next top tier event happening next month. It was originally supposed to be a LAN event held in early May, but was rescheduled to late August due to the global health situation. Many travel and large gathering restrictions still remain in place, forcing ESL to make the decision to hold the $1,000,000 tournament online.

ESL has their own circuit points system that has been quietly counting in the background. However, their points system is much more favorable to teams who placed well in their LAN events in late 2019-early 2020. As such, teams like Astralis and mousesports have high seedings despite both being outside the current top 10 teams worldwide. 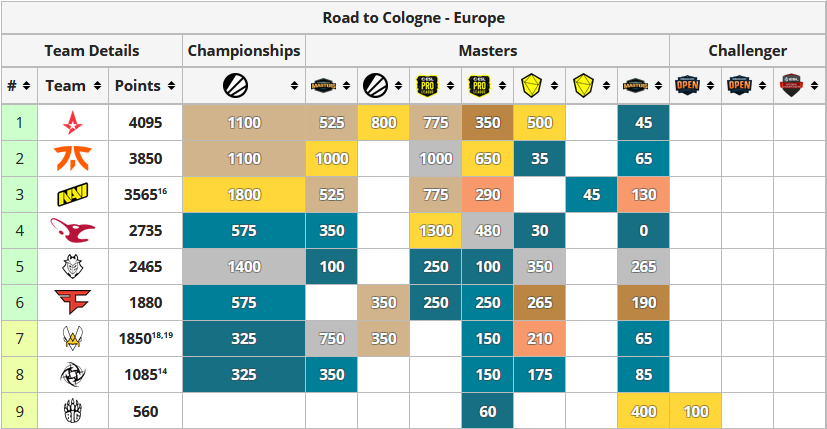 Originally, the top six CS:GO teams from Europe and top two from North America had automatic qualification for ESL One Cologne. The final eight spots would have been decided via a LAN qualifier held before the main event. A mix of teams from Europe, North America, Oceania, and Asia decided by ESL’s points circuit and current world rankings would have made up the 16 team qualifier.

Now, the four regions have been separated into their own individual tournaments in order to provide fair connectivity to servers. As a result, the prize pool has been cut in half with each region receiving a different amount. The ESL Pro Tour and BLAST Premier point rewards have also been adjusted downwards.

The BLAST Premier 2020 Circuit is a much different system than ESL’s. Instead of heavily weighing just their own LAN events, massive point totals have gone and will go to winners of all big CS:GO events. Na’Vi currently leads the table by a whopping 2425 points due to their win at IEM Katowice early this year. ESL One Cologne will be no exception, awarding a bulk of BLAST Premier Points to the winner.

However, BLAST is still making sure that teams prioritize their events. The top two teams at BLAST Spring Europe Finals and the winner of the North American Finals have all booked their tickets to the Global Final in January 2021. Even if Complexity, Vitality, and Evil Geniuses don’t do well in the back half of the year, they still have a $1,000,000 prize tournament waiting. The BLAST Fall Finals winner will also get a spot at the Global Finals alongside the Rio Major winner. The final three spots will go to the teams with the most BLAST Premier Points who haven’t already qualified after the Fall Finals.

Lastly, Season 3 of the Intel Grand Slam may have fallen under the radar for some people. Currently, six teams are listed as participants, all with one CS:GO event win each. Originally, ESL Pro League Season 11 and DreamHack Masters Jonkoping were supposed to award wins to their victors. However, as the events were moved online and featured winners in multiple regions, ESL has decided not to count them. Season 3 is essentially on hold until global LAN play resumes.

Intel Grand Slam update: tournaments with winners in multiple divisions will not count towards completing the prize.

Although this temporary online era of CS:GO has been turbulent, the scene is still thriving just the same. From a competition standpoint, there has seldom been a greater feeling of “anyone can beat anyone” present. Some of the normalcy that was lost will inevitably return with the LAN events. When that happens, it will be interesting to see who floats to the top to claim the multitude of championships available.