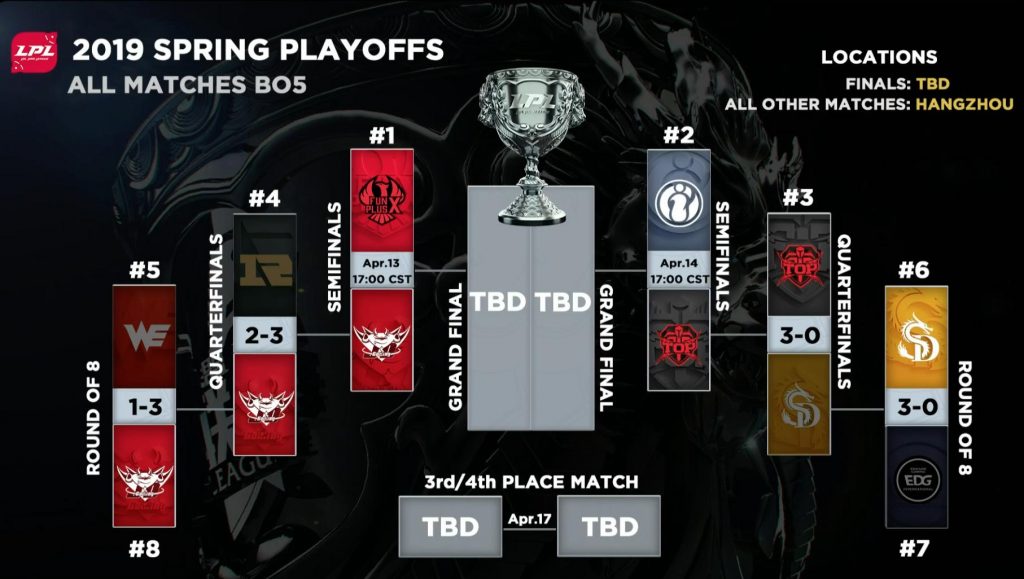 The first two rounds of the 2019 LPL Spring Playoffs are complete. JD Gaming and Topsports fought their way to the semifinals this weekend.

ROUND 1: JD GAMING BEAT TEAM WE

Team WE may have been the hottest team in China, but JD Gaming announced things would be different in the playoffs in game one.

Gu “Imp” Seung-bin’s Kai’Sa and Zuo “LvMao” Ming-Hao’s Rakan picked up First Blood just two minutes into game one, a sign of things to come. LvMao was all over the map early game to secure kills for JD Gaming as they routed Team WE. JDG did not drop a kill in game one, finishing a perfect 16-kills-to-0 in 29 minutes. LvMao finished 3/0/13 for 100% kill participation and Imp picked up seven of the kills in a 7/0/8 effort.

A three-man dive bot at 10 minutes cemented the early lead for Team WE. WE instantly deleted Imp’s Kai’Sa before YaGao’s teleport could complete. JDG tried to turn the play around, but xiye roamed down the river and Team WE picked up another two kills for a 5-0 kill and 3k gold lead at 10 minutes. Team WE were able to close the game out under 25 minutes, up 20-kills-to-6. Jin “Mystic” Seong-jun’s Vayne was the beneficiary of the early lead, going on to finish 10/1/3.

Game three was most closely contested of the series. JD Gaming used their Baron set-up to take control of the game and series. By clearing vision and forcing Baron repeatedly at 29 minutes, JDG were able to continue picking off members of Team WE until WE could no longer contest JDG at the objective. A 4k gold lead ballooned into a 7k lead for JDG, who used the buff to pick up turrets and further extend that lead.

Team WE were able to thwart JDG’s attempt to end at 34 minutes, but that merely prolonged the game a couple of minutes. JDG re-grouped, pushed again, and won game three by an 18-kills-to-14 score in 38 minutes. Sung “Flawless” Yeon-jun’s Jarvan IV finished 2/2/14 for 87.5% kill participation.

JD Gaming closed out game four and the series in 37 minutes. Imp continued playing Kai’Sa and continued dominating, finishing 11/3/14 for 25 of 27 kill participation. YaGao had his strongest showing of the series on Syndra, finishing 8/2/11. Team WE’s bot lane was once again held in check, with Mystic finishing 3/8/8 on Vayne in the decider.

Imp finished the series with a combined 28/10/29 K/D/A across the four-game series.

JD Gaming advanced to the quarterfinals to take on Royal Never Give Up with the win. Team WE will not see action again until the 2019 Summer Split.

SinoDragon capped their excellent debut into the LPL with a round one sweep over 2018 Worlds participant EDward Gaming.

The final big fight of game one took place top lane at 40 minutes. Chen “GALA” Wei’s Kai’Sa engaged on Lee “Scout” Ye-chan’s Corki to draw all 10 players to the area. Ray’s Kayle ult bought Scout time, but GALA’s Guardian Angel saved the day for SDG. Changhong arrived last to the party, but he and GALA were able to 2v3 the rest of the fight and win the opener for SDG 14-kills-to-12 in 40 minutes. GALA’s Kai’Sa finished 3/0/6 in game one.

EDward Gaming substituted Ming “Clearlove” Kai for Chen “Haro” Wen-Lin in game two, but the swap made no difference to SinoDragon. SDG had their most dominant game of the series, finishing up 13-kills-to-4 in 27 minutes. Changhong’s Sion was impactful early and unkillable later, finishing 3/0/5. GALA again did not die, going 4/0/9 on Xayah in game two.

Haro returned for game three, but SinoDragon were the owners of the drakes to close the series out. Xiaopeng’s Rek’Sai controlled the first three spawns, fortunately, all being mountain drakes for SDG to give them incredible objective threat throughout the game. That threat was realized when at 22 minutes SDG took Baron without contest, despite EDG having all five members alive.

A second quick Baron take at 29 minutes was more than enough for SDG to push for the win. The early mountain drakes made it possible for SDG to accelerate the game faster than Hu “iBoy” Xian-Zhao’s Sivir could scale while also allowing Huang “Twila” Ting-Wei’s Jayce to stay relevant throughout. SDG pushed down EDG’s Nexus at 31 minutes to secure their spot in the quarterfinals.

SinoDragon advanced to round two to face Topsports Gaming. Meanwhile, this was the final series for EDward Gaming until the 2019 Summer Split kicks off.

ROUND 2: JDG UPSET ROYAL NEVER GIVE UP

JD Gaming and Royal Never Give Up were both teams with incredible potential that failed to find consistency during the regular season. Surprisingly, it was JD Gaming that came out on top 3-2 in the first quarterfinals matchup.

Game one was dead-even in gold at 17:30. A full 5v5 fight broke out around the second infernal drake spawn. Critically, JD Gaming were able to secure it before the fight, giving them two to RNG’s zero. They then took RNG on in the fight, winning 3-kills-to-0 to take the first meaningful gold lead of the game combined with the scaling power of double infernal.

RNG could not deal with Imp’s Kai’Sa in this one as he finished 5/0/3 in JDG’s 29-minute win. Flawless continued his improved performance in the playoffs, finishing 4/0/5 on Lee Sin compared to Hung “Karsa” Hao-Hsuan’s 1/4/3 score on Rek’Sai.

Royal Never Give Up bounced back in game two to even the series at a game apiece. Jian “Uzi” Zi-Hao’s Xayah put the team on his back, finishing 12/4/6. He was the only member of RNG to finish with a positive K/D ratio in the game. JD Gaming actually led 20-18 in kills as their Nexus exploded at 27 minutes. Liu “Zz1tai” Zhi-Hao, Shek “AmazingJ” Wai Ho’s mid-season replacement in top lane, had a shaky 1/5/4 performance on Hecarim despite the win.

Royal Never Give Up came out victorious in game three, once again by a stellar Uzi performance. He built a sizeable 30 CS lead in lane in a Vayne versus Kai’Sa matchup and transitioned his power to early team fight wins for RNG. JD Gaming held a 2k gold lead at 19 minutes but overplayed their hand, diving RNG’s inner mid turret to their deaths. RNG picked up 4-kills-for-0 to take their own gold lead and control of the game.

THE DEVIL SENDS ITS REGARDS@JDGaming666 defeats @RNGRoyal in the #LPL Spring Playoffs with a final 3:2 scoreline!

JD Gaming had no way to get on Uzi in fights and it showed. Uzi finished 10/1/5 on Vayne in RNG’s 23-kills-to-11 win in 38 minutes. Zz1tai had a much better Hecarim performance this time around, finishing 4/2/14. Li “Xiaohu” Yuan-Hao’s Lissandra was named MVP of the game for his well-timed engages for RNG.

Facing match point and an end to their season, JD Gaming fought back in game four. Zoom’s Swain took over, crushing Zz1tai in lane priority. That was crucial at 16 minutes when RNG dove between JDG’s inner and outer bot turrets. Zoom teleported in on time immediately popped his ultimate and tanked the entire squad of RNG. RNG still won the fight, but Zoom kept JDG in it with his cleanup as RNG retreated.

With those early kills, Zoom accelerated his lead and became an unkillable force for RNG. Building Rod of Ages, Zhonya’s Hourglass, and Banshee’s Veil gave him incredible survivability and not even the brilliance of Uzi could take him down. JDG played through Zoom to win game four up 20-kills-to-14 in 35 minutes. Zoom finished 5/0/9.

As if his performance in game four weren’t enough, Zoom arguably carried even hard in the series winning game five. He was already 6/0/3 at 27 minutes when RNG knew they were in trouble. JD Gaming had just taken their mid inhibitor and RNG knew they needed to make a play, so they started Baron.

RNG secured Baron with their double mountain drakes, but they had no way out afterward. JD Gaming picked up three kills for none, giving them priority on the map despite the buff on RNG. RNG went to the well one more time at 33 minutes, again trying to take Baron before JDG could secure it to end the game.

This time JDG were there on time. Imp’s Kai’Sa last hit Baron and JDG won the resulting fight again. Zoom teleported mid to round up the remaining RNG members for a double kill and the ace. Zoom finished the game 10/0/7 on Kayle as the driving force to send them through to the semifinals. Uzi’s Vayne was held to 3/6/4, the only game this series he had a K/D ratio of under one.

JD Gaming secured their spot at 2019 Rift Rivals and advance to the semifinals where they will face FunPlus Phoenix on Saturday, April 13. Royal Never Give Up will be forced to watch a major tournament from home for the first time in a while as they fail to qualify for Rift Rivals.

SinoDragon’s incredible run in their first split came to an end in the quarterfinals as Topsports Gaming crushed SDG in a 3-0 sweep.

Game one was even at three kills apiece when Topsports found Changhong’s Sion alone top lane at 18 minutes. TOP picked up the kill with ease, allowing them to litter SDG’s jungle with vision on their way out. They used that vision at 21 minutes to pick off GALA’s Kai’Sa and transition that to a free Baron. TOP picked up an extra two kills as SDG hung around looking for a steal, suddenly giving them a 6.8k gold lead at 22 minutes.

Topsports needed only two more minutes and a push to close game one out. They ended the game before 25 minutes, up 13-kills-to-3. Zhuo “Knight” Ding’s Jayce finished 6/0/6 in game one, while Nam “Ben” Dong-hyun’s Morgana finished with the perfect support score of 0/0/11.

Topsports dominated again in game two, needing only 24 minutes for the second consecutive game. Knight once again went deathless, this time on Orianna, for a 4/0/7 score. Lee “LokeN” Dong-wook and Ben also did not die, finishing 4/0/3 and 0/0/9. All 4 kills on SinoDragon went to Xiaopeng’s Kindred, but they were not enough to influence the outcome.

SDG put up their best fight in game three of the series, but it still wasn’t enough. SDG picked up the seven kills of the game on their way to a huge 5k gold lead at 16 minutes. SDG kept that gold lead through 21 minutes and started Baron to force TOP into a fight.

SDG peeled off Baron and Changhong’s Sion engaged on TOP’s bot lane. Ben and LokeN avoided the knock-up and TOP were able to turn the fight around. Bai “369” Jia-Hao’s Vladimir hit a massive Hemoplague across SDG’s team and TOP won the fight 4-kills-to-2 and secured Baron.

Despite losing Baron, SDG still had the gold lead and pushed up to TOP’s tier two mid turret at 23 minutes. GALA’s Kai’Sa went too aggressive trying to dive 369 and was bursted out instantly. That gave TOP even more time to scale up their Vladimir and Vayne before the final fight at 28 minutes. 369 got the perfect teleport flank to round up SDG and TOP crushed the fight 4-kills-to-2 again, with enough time to push down SDG’s Nexus for the series sweep.

Topsports Gaming secured their spot at 2019 Rift Rivals with the win and will face reigning World Champions Invictus Gaming in the semifinals on Sunday, April 14. SinoDragon’s inaugural split ends with this loss, though they will look to build on their success in the Summer Split.